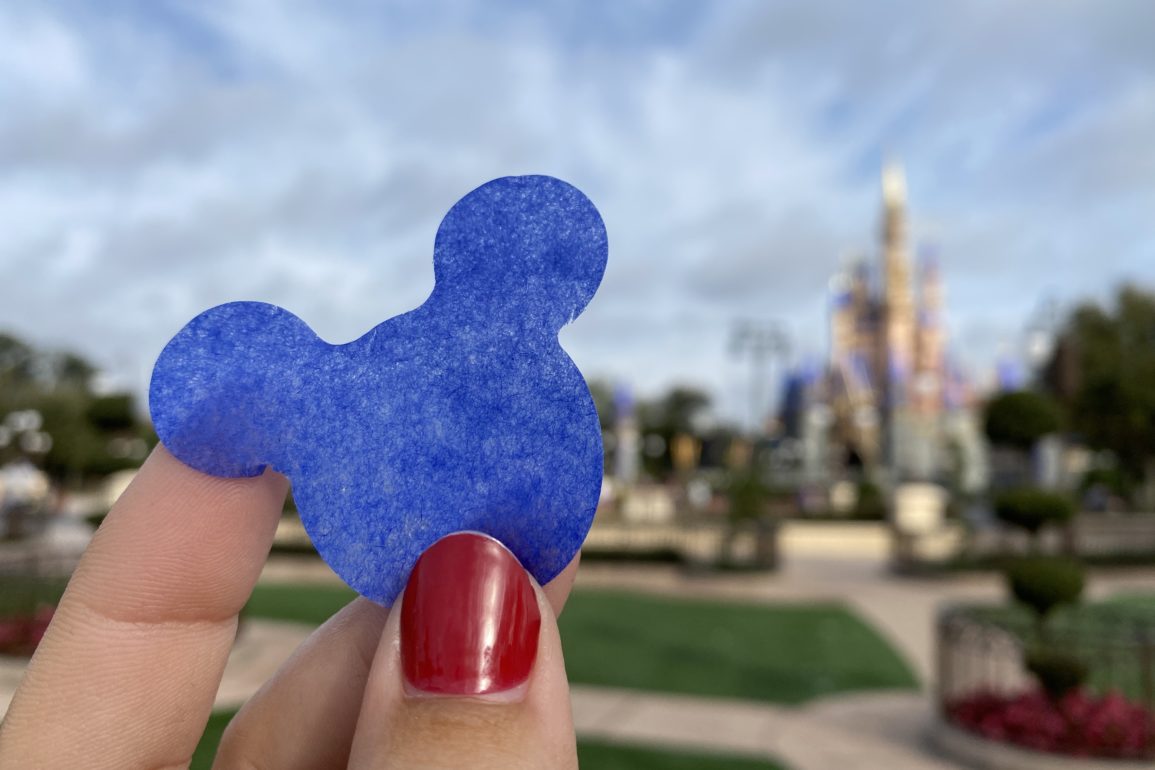 Hello from a beautiful day here at the Magic Kingdom! It was a perfect park day weather-wise until about midday when the skies darkened and a gusty rainstorm blew in, but we got in plenty of fun before that. Let’s get started!

Good Morning America was live from Walt Disney World this morning, and while we didn’t get to see the majority of the action, we caught a glimpse of the top of the float and some colorful balloons which had been set up backstage for the filming. Several announcements regarding the festivities for the upcoming 50th Anniversary were made on show this morning.

No new changes were spotted to the recently cleared Cinderella Castle Stage. For more pictures and information on it’s recent clearing, check out our article here.

Significant headway was made since yesterday in draining the moat surrounding Cinderella Castle.

A Cast Member was seen in the moat checking on the progress by measuring the water level on his boots.

We checked in on TRON Lightcycle / Run and found a worker in a man lift up in an area of metal framework that we don’t normally see work done in. We hope this means that things are being prepared for the final sections of assembled canopy to be lifted into place.

At this point we think we’ll feel lost when they’re finished repaving Tomorrowland bit by bit and we don’t have a new patch to show you every day. We found two new patches today, one on the other side of the water fountain outside of Auntie Gravity’s and one underneath the Cosmic Ray’s Starlight Cafe sign, almost completely blocking the walkway on that side of the landscaping islands.

The repainting of the mural on the side of Bonjour! Village Gifts has been finished. It’s wonderful to see this touch of theming returned to it’s full glory.

We found the scaffolding and scrim at Peter Pan’s Flight had changed direction, and instead of growing vertically or horizontally, had grown in depth. It has now expanded to reach across the rooftop and goes out of sight, most likely connecting to a point backstage and providing a walkway or supply line for workers within the scaffolding.

After seeing their usual float in use this morning backstage, the Mickey & Friends Cavalcade came out once again on their replacement float with the “Magic Kingdom Cavalcade” sign and alternate character placement. We’ll be on the lookout for their usual float to return, especially now that it may have gotten a new color scheme ahead of the 50th Anniversary festivities.

We stopped in at Westward Ho Refreshments today for a snack and found out that their schedule is changing. While they have been opening at 11am seven days a week (although we’ve personally seen them open later than that on several occasions), they will now be moving to a more limited schedule of closed Monday through Thursday, open Friday through Sunday. When the park gets busier again their hours will most likely change back to open seven days a week, but for now they’ll have more limited availability.

After several days of being gone, the December Minnie Mouse: The Main Attraction Loungefly mini backpack has returned to Uptown Jewelers, limit 3 per guest. We have said it before, but we are honestly shocked that any Main Attraction bags have been stocked in person here, and how long they have lasted. We hope someone has been able to snag their “grail” bag!

During the filming this morning, a confetti cannon was shot off, and we found little Mickey’s everywhere later! We love the small details like this. We had a wonderful day at the Magic Kingdom, and we hope you enjoyed coming along with us. Have a magical day!