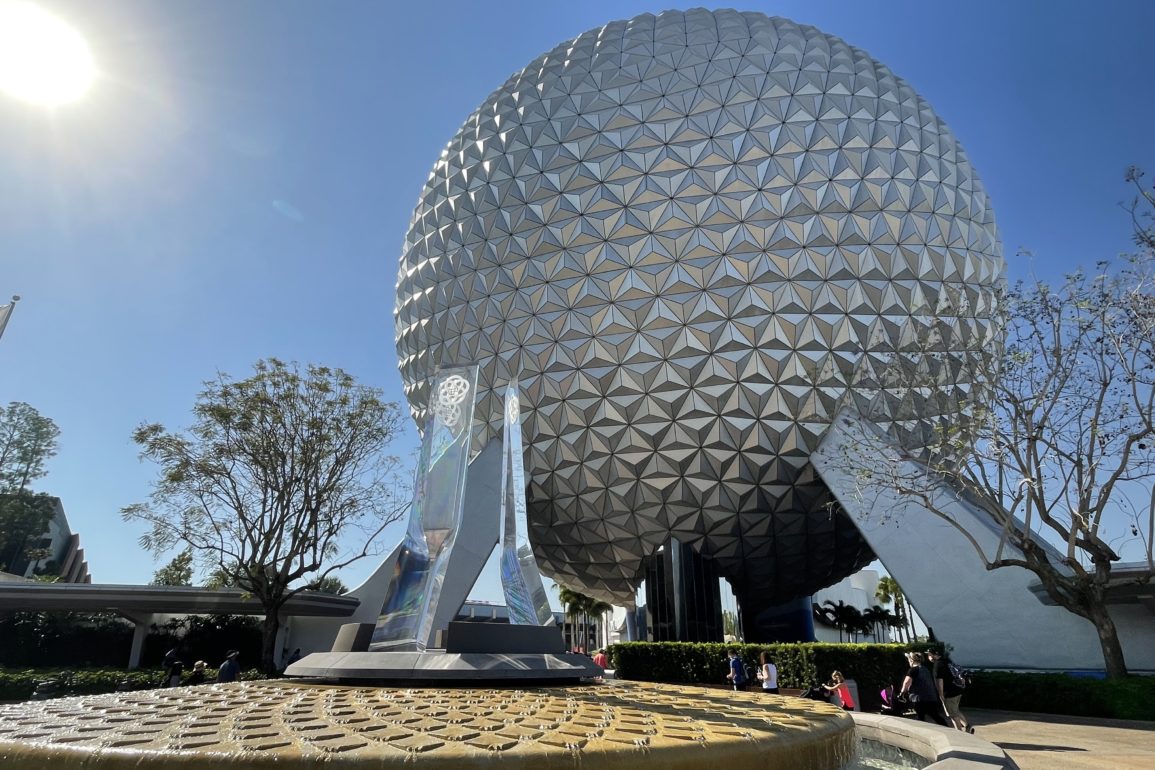 Hey everyone and as promised in my last photo report, another fun fact about Spaceship Earth that you may or may not know: The big ball has actually had 4 different narrators since it opened, and they were, Lawrence Dobkin, Walter Cronkite, Jeremy Irons and now Dame Judi Dench. Who knows, maybe after the refurbishment — if that ever happen — there may be a 5th.

As always, we start our day driving down World Drive to see the progress of the sign, which is coming along as Minnie is being prepped for her new paint background. Workers behind this truck were currently patching and cleaning up the posts so the entrance can be ready for primer and paint.

Once in the park, we saw that cement flooring was still being worked on, on the right side of the ride. Hopefully, once this is done, that’ll be it for the area.

Looking at Guardians, the ride seems to be almost rewinding at this rate, but they are working on the grounds around it. Sadly, we have nothing further to show since the construction wall is rather high.

Scaffolding was being put up in the Innoventions East breezeway, and hopefully, some exciting new progress will come this week.

If you’re looking to claim your prizes for the eggstravaganza, they have moved it under the gazebo across the way.

Stopping quickly at the Mexico Pavilion, which already had a line forming before it opened, The Three Caballeros were still no where to be found.

If you are coming for a margarita though, the line for the bar has been opened once again. That’s if you don’t feel like waiting forever in the normal line.

Journeying through China, we found this little guy sitting on the trash can. Hopefully, he made his way back to his owner and home in one piece. If not, please check with the Cast Members because he may have gotten turned in.

No progress is seen in Italy, but we’ve noticed the work tends to start later on in the day.

Stopping at The Regal Eagle Smokehouse, we got to try a returning treat that is delectable. Soft delicious brownie, chocolate ganache, with airy, fluffy marshmallow, and a dark chocolate cute topper… Well, read the review for yourself right here.

The Morocco Pavilion seems to be waiting for something, with rights turned over to Disney, we’ll just have to wait and see at this point.

In opposition, construction and touch-ups in the France Pavilion seem to be, as Walt once said, keep moving forward.

Flying over the France Pavilion expansion, testing out a new lens, got this great effect through the windows of the Skyliner. Maybe it was a mixture of light and the lens, but it’s cool to look at.

Back in China, it seems the Shanghai Disneyland Resort promotional video is up and playing again, gaining the attention of guests passing by.

Walking around World Showcase, we saw the Harmonious center barge being tested as its arms were being spun around. We were hoping for some waterworks on this hot day, but beggars can’t be choosers.

At The Seas with Nemo & Friends, we see the Bowmouth Guitarfish getting into the spring spirit — or at least we’re hoping. The story goes that The Seas has gotten permission to breed the Bowmouth by the SSP (Species Survival Plan) being that they are endangered and only 2-3 aquariums in the country actually have them. Well if you stop by the aquarium, the males are named Arrow and Archer and the female is Kat. Hopefully, we’ll see something happen down the line and who knows, it may lead to the second season of The Magic of Disney’s Animal Kingdom.

Well that’s all we have for you today, tune in next time to see what else we have in store for you.