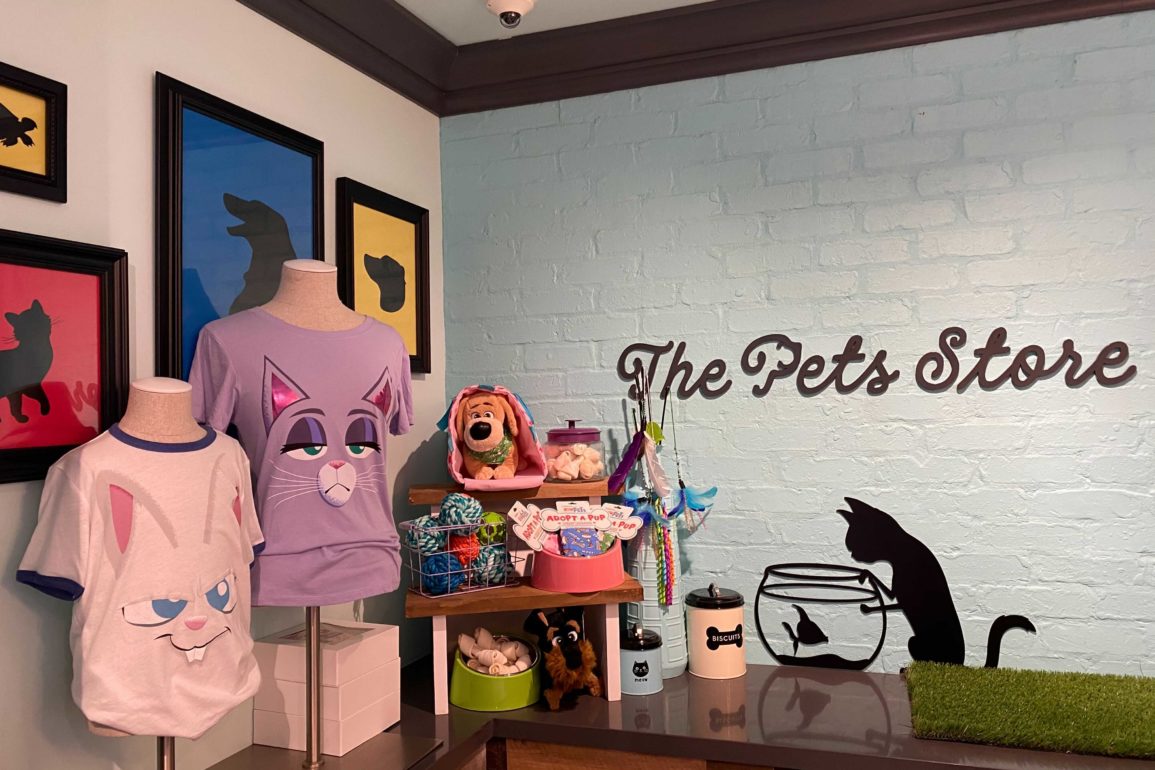 PHOTOS, VIDEO: Tour “The Pets Store”, Part of NEW The Secret Life of Pets – Off The Leash Area at Universal Studios Hollywood

The newest store at Universal Studios Hollywood has been unleashed! We’re taking ourselves for a walk through The Pets Store, which is now open.

The shop is located on the Upper Lot and serves as the exit for the upcoming attraction The Secret Life of Pets: Off the Leash (more on that in a moment). The shop had briefly opened just before the park closed back in March 2020, but thanks to the Taste of Universal event, guests can finally get their first look in nearly a year.

Inside, there’s plenty of merchandise themed to characters from The Secret Life of Pets films.

Some of the décor is themed to a chic Manhattan boutique, reminiscent of the setting of the first film.

Gidget, the white Pomeranian, stars in a window display.

Inside, there’s no shortage of plush, with plenty of characters to choose from.

Some of the neat highlights are the bone-shaped tables, along with a doghouse-themed display.

Something tells us this will likely become a fun photo opportunity in the future.

There’s also a large section devoted to the “Adopt-a-Pup” line, which we found at Universal CityWalk Hollywood back in September.

Guest will be able to take home their own plush friend, customized with their choice of accessories (sold separately). When they were sold at CityWalk, the pups sold for $25.00, with an additional $15.00 for a bandana and carrier.

A special deal includes a free bandana accessory with the purchase of any Adopt-a-Pup.

This blocked off stairway is marked as exit only, likely serving as the exit to the attraction.

Snowball the bunny (and his superhero outfit) dominate this display, which features plush and costumes.

Nearby, there’s a headband, T-shirt, and backpack that also feature the character.

While there’s plenty of dog merchandise, cat lovers can find something to love too. Chloe the cat shares this wall display with Gidget.

Princess the poodle can be found on plush, bibs, and children’s outfits.

Don’t worry, Max is also here on display, which features an assortment of T-shirts with characters’ faces on them.

There’s also “puppy eyes” merchandise in blue to “distract you.”

Given that the attraction was supposed to open almost a year ago, they’re ready to run sales. One sign notes that guests can buy a toy or plus for full price, and receive a second one for 50% off.

Thankfully, these pets are so adorable that fans are likely to snap them up quickly!

If you’d like to see even more of The Pets Store, there’s no need to roll over and beg! We have a full video tour below:

Keep reading WDWNT and Universal Parks News Today as we report on everything that’s new at Universal Studios Hollywood!