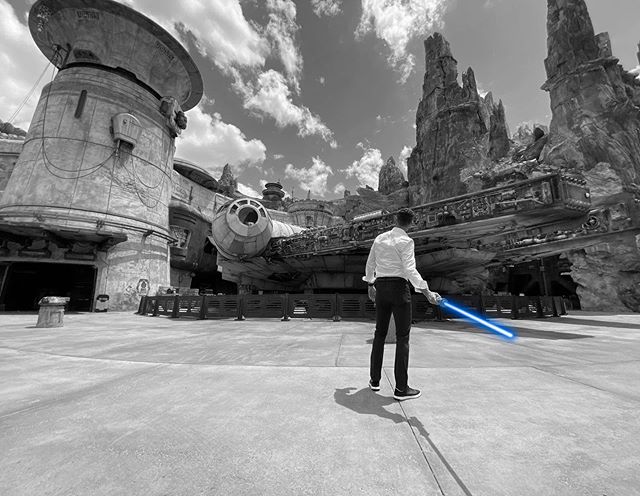 A few days ago, Disney Parks Chairman Josh D’Amaro stunned viewers of “A Special Look Inside Disney Parks” by wielding a “real” Star Wars lightsaber. Thanks to VR/AR/Web developer Ben Ridout on Twitter, we now have an idea of how this “real” lightsaber works.

As Ridout points out, what makes this lightsaber real is not an ability to slice and dice, but the ability to extend and retract an illuminated blade. His animation in the tweet above showcases how the lightsaber works similar to a tape measure.

Ridout took a look at the lightsaber’s patent, filed back in 2018, to figure out that the technology would work like connecting two tape measures. The lightsaber’s “blade” is made of semi-transparent flexible plastic that is wound flat into two spools when inside the hilt. A circular cap at the end of the blade keeps it curved when it extends.

A third spool inside the hilt holds a strand of flexible LED tape that is also attached to the circular cap and extends inside the hollow blade, making it illuminate from the inside. The hilt holds the three spools, a motor, and a battery.

Disney has not yet announced how these “real” lightsabers will be used in the Disney Parks, but it’s possible they will be part of the immersive Star Wars: Galactic Starcruiser hotel experience. No matter what, we can’t wait to see these lightsabers in action. Keep checking WDWNT for more information.

Next
PHOTOS: More Pavement Replaced in Fantasyland at Magic Kingdom