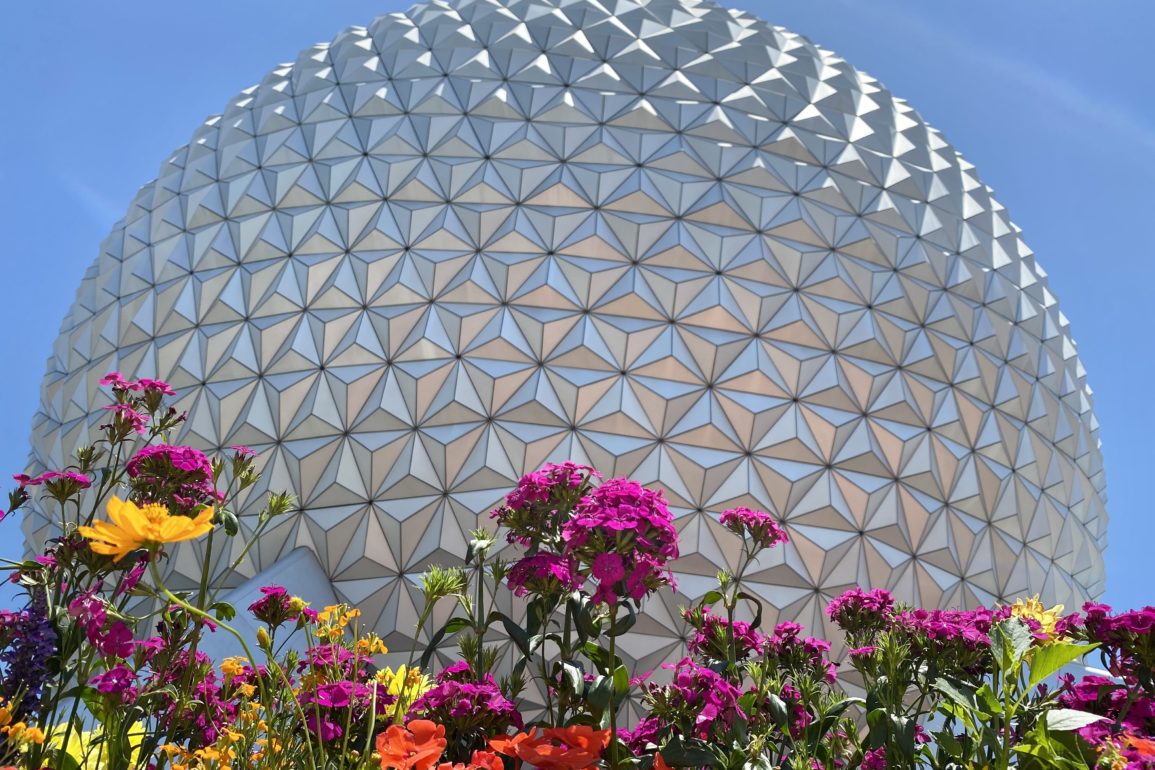 Hello from another beautiful day here at Walt Disney World! It started out a bit cooler, but we were very happy to enjoy the temperate weather while starting our day at EPCOT. We found some new things to show you, so let’s get started!

On our way to the park, we saw that patchwork was being done on the “Welcome” sign on EPCOT Center Drive. Work was concentrated on the right-hand side of the gate this morning.

When we entered the park, we were surprised to find the first “Points of Light” had been installed in view of the entrance. For more pictures and information, check out our article here.

Nearby, additional work had been done overnight on Innoventions East, with this corner being rounded out with new metal being added and a new I-beam trimmed to fit. For more pictures and information, check out our article here.

On our way around World Showcase, we found that the bridge between the United Kingdom Pavilion and the France Pavilion had begun to be repainted. The right side was completely finished.

The left side was started, with the bottom completed, but the top railing untouched.

In the Italy Pavilion, we found more bridge work.

The recently uncovered refurbished areas have started to be painted with a marble pattern to match the rest of the bridge.

Several spots were started, but nothing has been finished yet.

Next, we found this late-comer to the floral hidden Mickey line in the Mexico Pavilion with this embroidered clutch, which retails for $24.99.

We had a great time at EPCOT, but we weren’t done yet! We couldn’t let Earth Day go by without spending some of it at Disney’s Animal Kingdom, so we headed out to park hop.

When we got there, we found filming was being done on the overlook in between Africa and Asia, and was blocked by planters.

We also found a mysterious bit of landscaping work being done near Pizzafari, which was blocked off by crowd barriers.

In Asia, we found a new bright banner had been installed just outside of the “Feathered Friends in Flight!” theater. We’ve been seeing improvements and refurbishments all over Walt Disney World ahead of the 50th Anniversary celebrations later this year.

One other such improvement is the replacement of the prayer flags outside of Expedition Everest. As the old flags are sun-faded and weather-torn, it’s easy to distinguish them from the bright new ones. These new flags seem to be replacing the old ones one or two strands at a time.

Thirsty River Bar has a new few drinks available, including the Avalanche Frozen Blue Margarita which is a part of the new menu that has been introduced at this location. The Yeti Sunset and the First Magnitude Honey Bee Citrus Draft Blonde Ale are specials for Earth Month celebrations at Disney’s Animal Kingdom, so be sure to get them while you can.

We found a few new pieces of merchandise here, starting with these youth socks featuring Joy and Sadness from “Inside Out”. This is a two-pair sock set and comes in small, medium, or large. We found these socks at Discovery Trading Co for $13.99.

Next, we discovered this ceramic Expedition Everest mug at Island Mercantile for $22.99.

We also spotted this new Mickey & Co. shirt featuring Pluto at Island Mercantile as well for $26.99.

Our favorite find of the day were these new Limited Edition pins. As the latest edition in both of these series, they are both a little late as they arrived in the latter part of the month when they normally arrive towards the beginning. We think they were worth waiting for! For more pictures and information, check out our article here.

We were glad we got to spend some time today in this beautiful park, which celebrated its 23rd birthday today, after opening on April 22, 1998. Happy Birthday, Disney’s Animal Kingdom, and Happy Earth Day! We had a wonderful time at Walt Disney World today, and we hope you enjoyed coming along with us. Have a magical day!