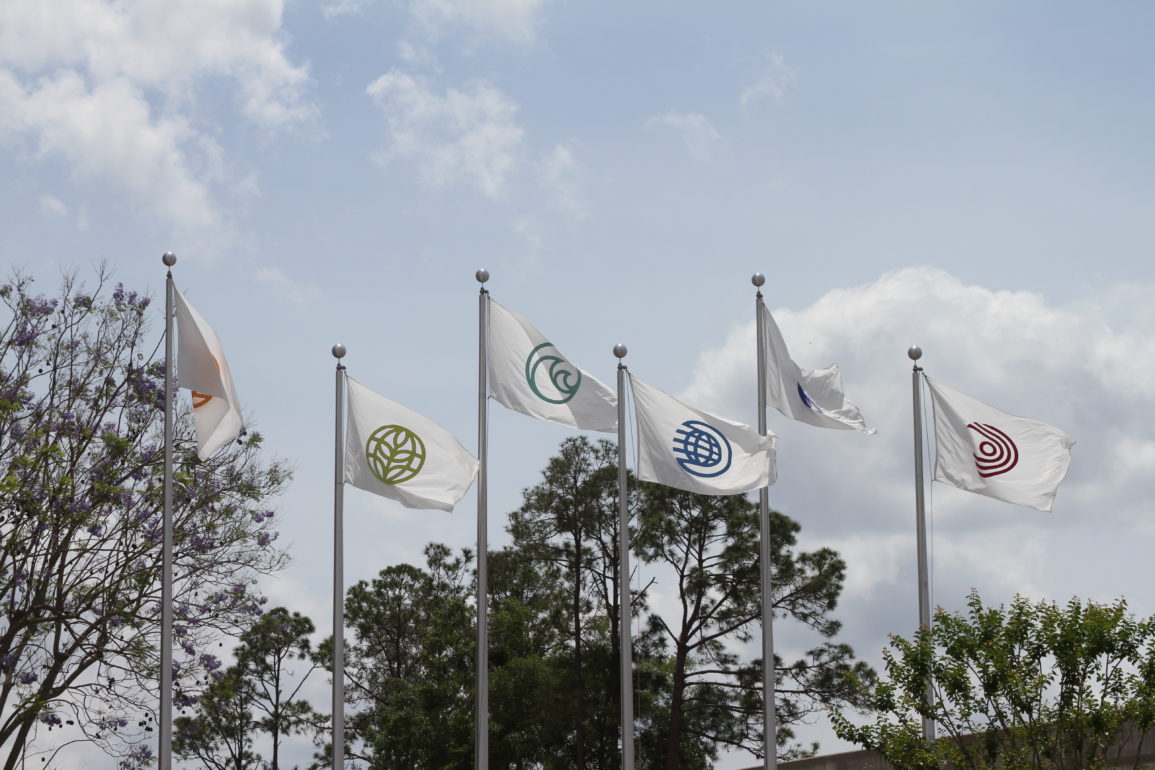 Hello everyone and welcome to another day at Walt Disney World! Since we’re on PeopleMover-watch today, we’ll head over to Magic Kingdom later. Let’s get our day started at EPCOT!

With the weather staying perfect for repainting, the priming looks to be finished on the “Welcome” sign on the right side of EPCOT Center Drive.

With “Points of Light” popping up everywhere on Spaceship Earth, it’s getting harder and harder to keep up with all of the additions.

Work continues over at Pin Trading Headquarters with at least 2 weeks worth of work to go. The original estimate has been around 3 weeks, so another 2 weeks seems reasonable to expect.

We caught some welding being done on the new rounded corner recently added to the Innoventions East construction where a new restaurant is set to be located. We originally expected an edge and got a curve instead, just goes to show you that even we can get surprised from time to time.

No changes to the exterior of Guardians of the Galaxy: Cosmic Rewind, but we did see evidence of the outside area being dug up.

There is nothing major to report on Harmonious, either. Although, a lot of workers have been placed on the barge but from this distance, it’s hard to tell exactly what they’re doing.

Over on the Gran Fiesta Tour, the Three Caballeros are still missing. We stopped by to say “Hello” to the topiary versions.

On our way around the world, we once again ran into the princess cavalcade and caught this picture of Aurora completely enamored but a young guest dressed as a princess.

We took a quick stop at the Oasis Sips & Sweets in the Morocco Pavilion to finally try this delicious almond cookie. It’s called an Ergolavos and for $2.50 it was definitely worth it with a crispy exterior, soft interior, topped with a chewy cherry on top.

Over in the Japan Pavilion, we stumbled upon another lost hat. In case you ever lose something at the park, don’t give up so easily. Guests and Cast Members will either leave what they find in a place easy to find or with a cast member at close by store. At the end of the day, all lost items are then turned in where Disney actually has a warehouse where items are categorized and stored until hopefully retrieved.

Over in the Germany Pavilion, it seems the trains are still having some technical difficulties as this express train was stopped dead in its tracks.

The bridge in the Italy Pavilion still awaits its paint job, but the molds make it look sleek and nearly brand new.

We may not be able to tell a lot from our lack of height, but it looks like some ductwork was finally finished in the background for La Gelateria.

No changes over here in the France Pavilion but we’ll tell you this, we can’t wait for the expansion and ride to open on October 1st!

Before we left for Magic Kingdom, we stopped by Port of Entry to find that they had three prizes restocked for the Spike the Bee’s Pollen-nation Exploration. Spike’s tumbler is back in stock, but it seems Minnie’s tumbler has been sold out. To make things even more complicated, this is the only store that had the three choices while other stores only had the Orange Bird tumbler left.

This was the second stop of the day as Cast Members were given a preview of the Peoplemover. We have to say, we were a little jealous seeing them ride and not being able to partake ourselves, but word has it that if everything goes well, we’ll be able to ride it Sunday at the earliest.

That’s all for today as we take the ferry back and catch this breathtaking view of Disney’s Polynesian Village Resort. Come back tomorrow as we keep you up to date on all the changes going on at the park from the site that brings it to you first, WDWNT.