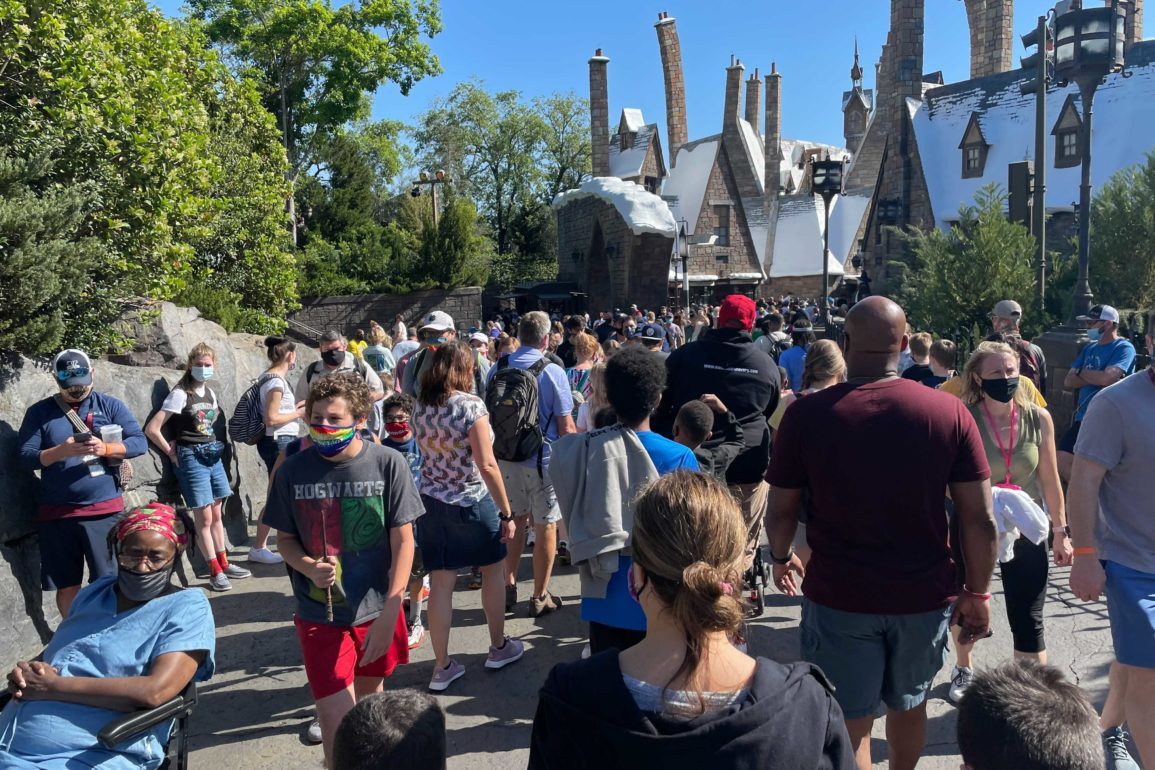 It’s a beautiful day here at the Universal Orlando Resort and after several days of the parks hitting capacity, we’ve arrived bright and early and ready to take on the day. We navigated the crowds through CityWalk and made our way over to Islands of Adventure first.

We spotted a new “Coming Summer 2021” sign added next to the VelociCoaster height requirement on the sign outside of the entrance to the parks. Later on in the day, we would get the official announcement of a June 10 grand opening as well as a first look inside the queue. We can’t wait!

We found a new Popeye face mask available in Islands of Adventure Trading Company. It comes in medium, large, and extra large sizes.

Dudley Do-Right’s Ripsaw Falls was having a delayed opening and was drained. This ride recently went through refurbishment, so it’s unfortunate to see it having issues still.

Restaurants weren’t even open yet and guests were lined up waiting for food. There aren’t too many breakfast options around the park, and if you arrive for early park admission at 7 AM, it’s no surprise you’re ready and waiting for restaurants to open at 10 AM.

There aren’t very many food options available from carts, but if you’re craving a turkey leg or popcorn, you’ll be waiting in a long line, too.

The rest of the Jurassic Park Discovery Center sign has been painted a beautiful bronze colored.

The park was crowded, but it didn’t feel too bad at first. It seemed like crowds started to pour in around 10 AM. The bypass bridge was not open, which caused Hogsmeade to feel even more crowded. We can’t remember the last time we were stuck in the middle of crowds like this.

We spotted the VelociCoaster testing with water dummies, which might be why the bypass bridge wasn’t open.

Everyone likes Green Eggs and Ham.

We took the backstage pathway in Seuss Landing and made our way over to Universal Studios Florida.

Crowds weren’t too bad over at Universal Studios, but there were still lines for food all around the park.

We spotted Team Members inside the old “A Day in the Park with Barney” theater. Someone was in a lift and a few other Team Members were going in and out of the theater. We have a feeling things are going to change around here soon.

We’re still obsessed with the Brussels Frites from the Belgium tasting booth. Thankfully, Mardi Gras has been extended through May 2 so we’ll have plenty of time to enjoy these delicious sauces. (If anyone wants to send us a recipe for these sauces, my email is at the bottom of this page.)

It’s a hot day today, so we’re going to treat ourselves to a Sour Patch Kids ice cream.

Thanks for joining us today around the parks. It’s been a busy day and we’re ready to get out of here. Be sure to keep following Universal Parks News Today for more updates and we’ll see you next time!