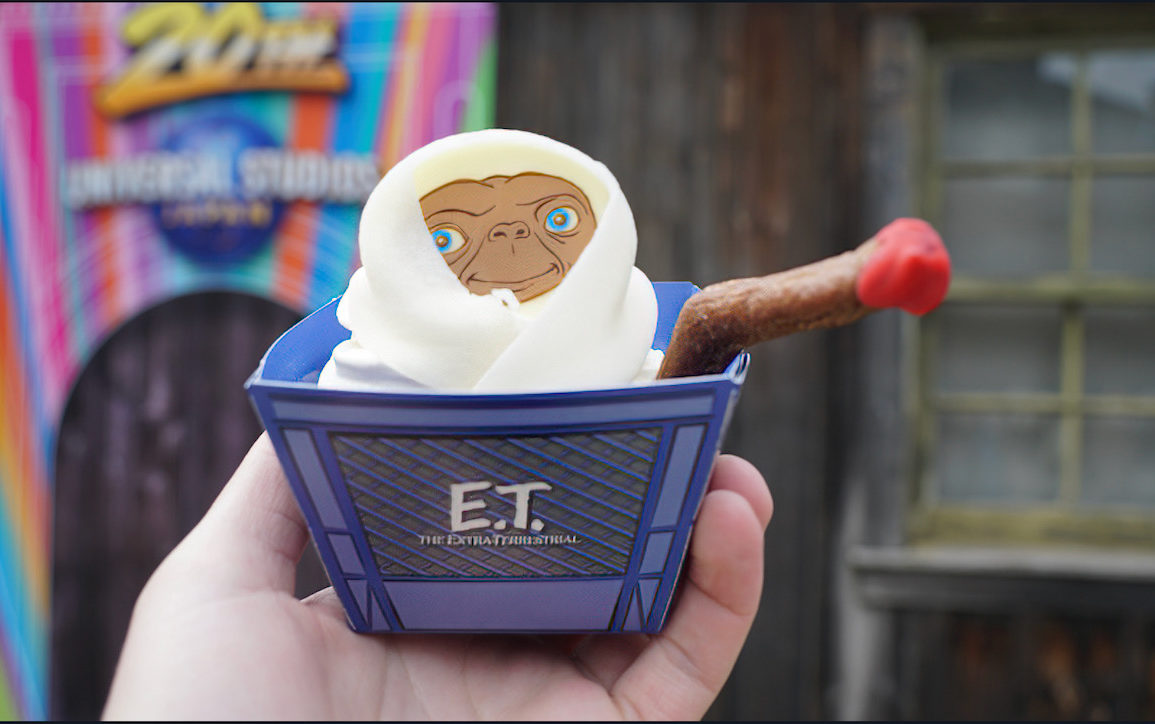 With the 20th Anniversary “NO LIMIT!” celebration underway at Universal Studios Japan, a number of snacks paying tribute to the park’s opening day attractions are available at the aptly-named NO LIMIT! Market in the park’s New York area, from a delicious Terminator 2: 3-D black pepper bun to a questionable Back to the Future: The Ride white bean paste churro. But one of our favorites by far pays tribute to the now-defunct E.T. Adventure—a chocolate crunch sundae!

The E.T. “I’ll Be Right Here” Chocolate Crunch Sundae is sold at the same cart as the Back to the Future: The Ride DeLore-An Churro at the NO LIMIT! Market.

At first glance, it looks pretty standard, but there’s a surprising amount of layers to this sundae.

A flavorless wafer with a red icing tip sticks out the side, emulating E.T.’s outstretched finger to Elliot at the film’s close.

Meanwhile, E.T. himself is a printed white chocolate piece wrapped in a mochi “blanket”. The rest of E.T. is represented by the vanilla soft serve on top.

But just below, we can see chocolate soft serve toward the bottom.

And even further down, it turns out there’s chocolate crunch (as expected in the name) and strawberries on the inside! Gosh, I hope that doesn’t represent us cutting E.T. open and actually eating him…

The cup itself is pretty cool as well, with designs on the front featuring the E.T. logo.

Honestly, there’s nothing particularly negative to say about our experience with the E.T. Sundae (as it shall be referred to from here on). The presentation is obviously excellent despite a bit heftier of a price than other snacks at the NO LIMIT! Market), and there’s not much to speak about the taste. It’s vanilla and chocolate soft serve with some strawberry at the center, all of which are delicious as soft serve can be! The vanilla in particular has a strong taste, a pleasant surprise in a country where “milk” is the defining white ice cream flavor. The chocolate crunch at the bottom only added more to the experience, the mochi cover around the E.T. white chocolate piece was a bit tough to split with our spoon, however. Plus the “outstreched finger” wafer was essentially flavorless. But none of this means you shouldn’t buy the E.T. Sundae by any means! In fact, we highly recommend you do!

The E.T. “I’ll Be Right Here” Chocolate Crunch Sundae is available throughout the 20th Anniversary celebration at Universal Studios Japan in the NO LIMIT! Market in New York. We look forward to a couple more of these as the unforgivingly hot and humid Osaka summer approaches, and hopefully you’ll be able to as well! Are you interested in trying the E.T. Sundae? Let us know in the comments below!