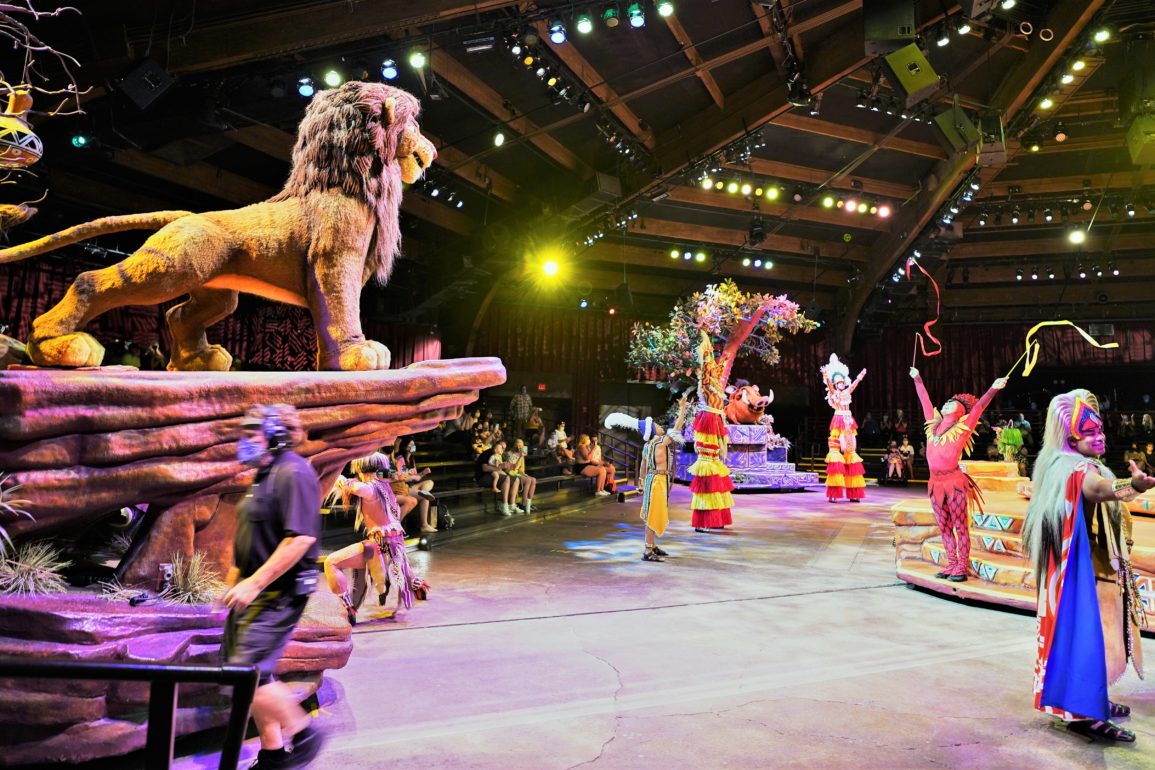 Jambo from Disney’s Animal Kingdom! It’s a pretty big day from Walt Disney World’s youngest park, as we see the (modified) return of one of the resort’s most popular live shows: “Festival of the Lion King”.

Disney’s Animal Kingdom is perhaps the park with the most detail—it exists at every turn, and in so many elements of the park.

We got an early start, and well before 8:00am signs were out indicating that Island Mercantile would, as it does every day, open later than its sister store Discovery Trading Company.

Discovery Trading Company was not only open, but is offering the new line of Starbucks “Been There” Star Wars mugs which debuted on May 4th.

Speaking of the park’s detail, the Tree of Life has no shortage of it.

These Russell and Dug sculptures, while not made of sand, are always a fun find outside of the Anandapur Theater which is home to the temporary “Feathered Friends in Flight” bird-centric show.

The view of the Tree of Life from Asia is, in our opinion, a bit more impressive than from the park entrance.

Once we made our trek around the park, we checked out Island Mercantile. They’re stocking several pieces of the new Disney Rainbow Collection, along with a couple slightly older items such as this rainbow castle hat.

We also found this lovely petal Mickey on the walkway outside.

Heading headed back into Africa, double-checking a few things within this continent of the park.

As usual, Harambe Theatre didn’t have much of anything going on. But wait…

There was a fair amount of activity, with hand sanitizer dispensers being brought out and filled, queues being set up, and other small details.

While we waited to see what would happen at the theatre, a couple character flotillas glided by, featuring Chip & Dale, Goofy, Donald, Daisy, and Launchpad McQuack.

For those of you who follow WDWNT closely, you know we announced fairly early that “A Celebration of Festival of the Lion King” would debut today. A couple hours later, we had a full contingent of Cast Members ready to welcome guests into the theater after more than a year.

Shortly thereafter, we’d have the privilege of the updated show—and we have the entire show available for you to watch in our post detailing the reopened experience.

While modified, the show contains many of the most memorable elements from the original “Festival of the Lion King”, with a couple notable exceptions.

Finally, once we exited the theater, word had spread of the show’s return and lines formed for the next performance. Showtimes are now available through July.

Thanks for joining us for the exciting return of “Festival of the Lion King”! Now that the show has returned in some form, will you be making Disney’s Animal Kingdom a priority on your next Walt Disney World visit? Let us know in the comments.

Next
PHOTOS, VIDEO: Take a Merry Trip to Nowhere in Particular on Mr. Toad’s Wild Ride at Disneyland