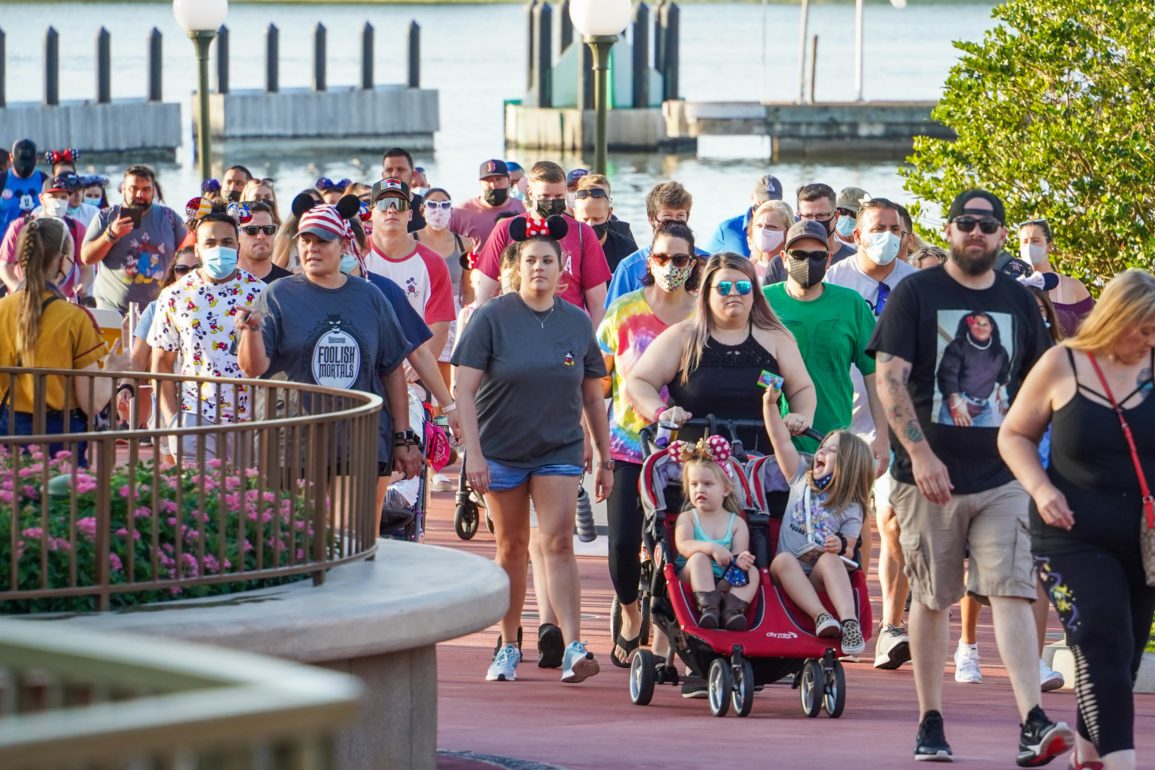 It’s a historic day at Walt Disney World, as news came late yesterday that masks would no longer be required outdoors starting today. With these changes comes a much different feeling at the parks. Today, we’re visiting Magic Kingdom and Disney’s Animal Kingdom to see what it’s like and how guests are reacting.

Our morning started with a lack of temperature screenings, which ended a day earlier than originally announced. With the face covering policy changes, having maskless guests in close quarters with temperature check personnel didn’t make sense.

At the Magic Kingdom entrance, new signage was in place. This sign offered a reminder to guests to keep their masks on while indoors and at attractions.

Once inside in the morning, and throughout the day, guests took full advantage of the policy change. Roughly 50 to 60% of guests opted not to wear a face covering when outdoors, by our estimates.

Guests were even making use of the rule change as they made their way from the ferryboat to the park entrance.

Despite most of the park now being a mask-optional area, Relaxation Stations are still around, at least for now. Our sister site, Universal Parks News Today, noted that Universal Orlando removed their equivalent rest areas overnight as a result of similar mask policy changes.

Today, guests aren allowed to forego their mask while in extended queues—those lines which extend past the traditional entrance to an attraction. Cast Members are reminding guests to wear their mask when entering the formal queue.

Individually-wrapped disposable masks are being distributed to attraction entrances this morning. Disney is ensuring that masks are available for guests who may misplace theirs while walking around outdoors.

Back to some of our standard fare, a new line of Tinker Bell Dooney & Bourke items has been previewed at Upton Jewelers. The line—at least what’s on display here—includes three bags and a MagicBand.

Across Main Street at The Emporium, a new “it’s a small world’ game has arrived. The game was originally released online at shopDisney, and has now made it to the parks.

Construction, including installation of lighting and other electrical components, continues at TRON Lightcycle / Run. The last of the temporary supports still remain, but are poised for removal in the coming week.

Character cavalcades are continuing on with no changes, despite the relaxing of face covering rules for guests. There seems to be a bit more energy during these performances, perhaps as guests feel the trend towards ‘normalcy’.

While distancing remains an issue at times (based on 3-foot guidelines), guests are clearly willing to sacrifice that spacing in order to take in the entertainment offerings.

At Disney’s Animal Kingdom, we are checking in on any potential changes to physical distancing given the recent policy adjustments.

As we previously reported, ‘A Celebration of Festival of the Lion King’ would be putting guests closer together starting today. Those changes did indeed happen, and we have plenty of details and photos on the changes.

The modified show, which soft opened last weekend, has lost none of its shine due to these seating changes.

We also checked in on ‘It’s Tough to be a Bug!’, but no changes to the every-other-row seating have been made yet. Remember Hopper?

On a related note, the queue and exit to the show provides some unique up-close views of the Tree of Life.

Nearby, the “Moana” inspired sand sculpture, which artists began last weekend, has been completed at the stage across from Flame Tree Barbecue.

Like Tomorrowland Terrace earlier, the Pizzafari Relaxation Station remains available to guests despite the loosening of mask guidelines.

Finally, we were right on time to catch the day’s last performance of ‘Winged Encounters — The Kingdom Takes Flight’. While short, it is one of the most impressive animal-related performances anywhere in the park, full of color and very close encounters.

Thank you for joining us today at Magic Kingdom and Disney’s Animal Kingdom! Be sure to check in with WDWNT.com regularly for all of the biggest news from Disney parks around the world.

Next
PHOTOS, VIDEO: Star Tours Blasts Back Into Orbit with Physical Distancing and Plexiglass In Place at Disneyland Park