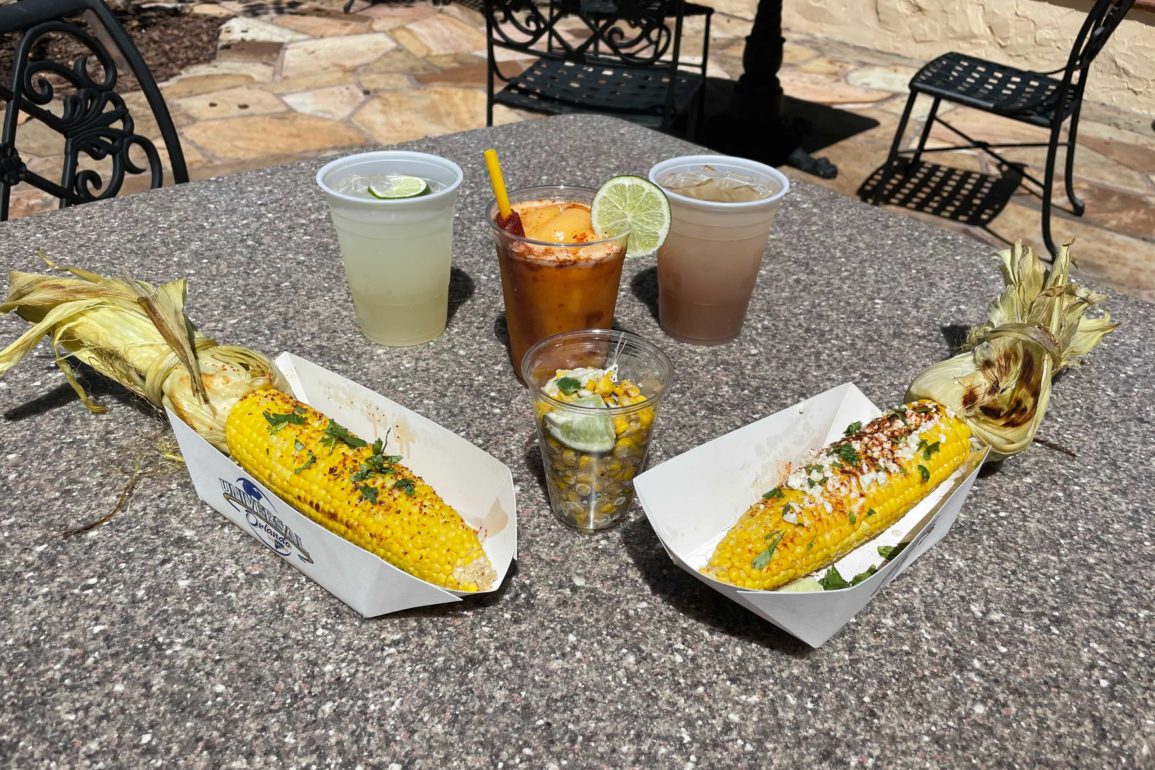 Summer is on the horizon, and Universal Orlando is bringing the flavor to a new food “festival.” Three venues have popped up around Universal Studios Florida, with a fourth reportedly on the way. Today we dropped by the stand at Battery Park to see what new treats were in store.

The Elotes Asados are fresh off the grill.

The Mangonada was icy and refreshing with a sweet mango flavor. The Tajín worked well to complement the mango and add to the flavor palette. The straw is covered in tamarind for additional variety. The tequila wasn’t very strong, but the drink was delicious.

The Chispas de Fuego is a creamy coconut drink with lime. The menu lists mango, but it was undetectable. The Tajín really overpowered the other flavors. It wasn’t bad, but we recommend skipping it and going straight for the Mangonada.

This was an extremely light and refreshing drink, with a sweet undertone. It ended up being our favorite of the two agua frescas and was perfect for the hot day.

If you’re a fan of the Cool Lime Refresher from Starbucks, you’ll like this drink. It was sweeter than the tamarind agua fresca, with a strong lime flavor and a hint of tartness.

There’s nothing better than eating fresh corn on the cob in the summer. The traditional Mexican street corn wasn’t spicy, even with the plant-based jalapeño mayo. The cotija cheese, ancho chili powder, and cilantro make for a classic dish. You can’t go wrong.

The Cilantro Butter Elote Asado was sweet, savory, and delicious. Each bite was better than the last. This is the true winner of the battle of the corn. Don’t sleep on this one. We may make many return visits for this dish.

The Esquites are the Traditional Elote Asado OFF the cob, served in a cup for easy eating. It reminded us of the Stolen Teeth Street Corn dish from last fall’s Halloween Horror Nights food truck. Like the Elote, the Esquites Asados aren’t spicy. We definitely recommend this if corn on the cob isn’t your style.

All three arepas are returning from the Mardi Gras Colombia Booth. The shredded meat was tender and juicy. The plentiful avocado elevated this arepa to another level. We liked the balance of flavors in this offering, and we could definitely see ourselves getting it again.

The queso arepas claim to have mayo ketchup and cilantro, but the only thing we could taste was mozzarella cheese. Kids and picky eaters will probably enjoy this option, but we wish there were something else going on to liven up the flavor.

The Coxinhas made a comeback from the Brazil Booth at Mardi Gras. It was a nice little snack, but it’s not going to fill you up. The chicken was pretty bland. They were average and we wouldn’t order these again.

The Battery Park Summer Bites Stand is located under the pavilion by the lagoon, across from Mel’s Drive-In Restaurant and Transformers: The Ride – 3D.