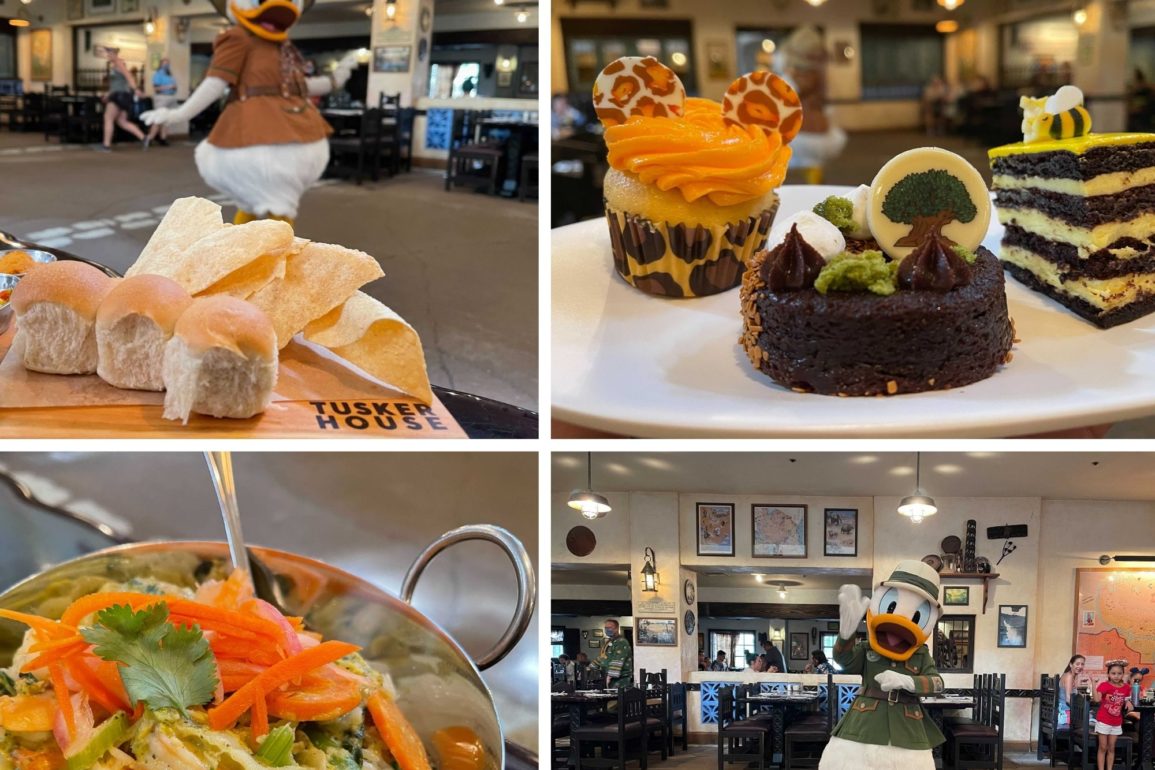 Tusker House reopened yesterday for breakfast, lunch, and dinner at Disney’s Animal Kingdom. We already checked out breakfast and then returned for dinner, which is $55 per adult and $36 per child. Characters appear at both meals but remain physically distanced.

Set in the Africa Section of Animal Kingdom, Tusker House is adorned with the same Africa-inspired look as the rest of the land.

At Tusker House guests are notified by text message when their table is ready.

Cast Members wait to say “Jambo!” to guests as they enter into the restaurant.

And as you travel throughout the dining areas you can gear up for your own safari adventure!

One of the best parts our meal was welcoming these expedition-ready characters back to the restaurant! Mickey, Daisy, Donald and Goofy all made the rounds during our meal.

Mickey was especially engaging, pantomiming all of the animals he encountered on his safari.

We absolutely loved seeing Goofy back in his safari gear!

Daisy struck a pose to show off her straw hat and adventurers garb.

And Donald came out to say hello in his belted, army green expedition-wear.

To commemorate your safari-inspired dinner, they leave you with this pre-signed card at the end of your meal.

The bread service comes with three delicious sauces which are straight from the Sanaa bread service. These are red pepper hummus, mango chutney and coriander sauce.

We enjoyed the pappadam which is a satisfying and crispy version of the traditional flatbread. It worked well with all of the sauces.

But the service also comes with small rolls which did not wow us. They were warm and soft, but seemed similar to plain dinner rolls and did not pair well with the dips.

The salad consists of mixed greens with a side mixture of cucumbers, onions and tomatoes.

We enjoyed the side mix but found the dressing on the greens overwhelmingly salty. We even asked for a second salad to be sure it wasn’t a fluke, but the second was just as salty as the first. It was difficult to enjoy this because the salt overwhelmed the whole salad.

Overall we were underwhelmed by the meats at this meal.

We found the Moroccan Spiced Beef a bit tough to chew.

It comes topped with the same coriander chutney that is on the bread board. And while we like the chutney, the dish still falls pretty flat.

The pork is cooked well. It was tender with a nice spice to it.

However, on the downside, the pork proved to be a bit too fatty for our liking.

While the chicken was flavorful and tender, it was difficult to work with because it’s half a chicken still on the bone.

Due to the presentation the chicken was not easy to cut or serve amongst our party. We think it would be helpful to have a sharper knife to divvy it up.

We were delighted to find that the green curry shrimp stood out amongst the other entree items.

This flavorful dish was similar to traditional green curry. It was packed with several large, plump shrimp that were perfectly cooked.

It was also topped with a generous amount of pickled onions which complimented the dish well.

Overall the sides were rather basic, with no real noticeable standouts.

Green Beans with Carrots and Corn

We were not big fans of the mixed vegetable medley which blended green beans, carrots, and corn. The veggies were fresh, but overall they were too bland to compliment the spices in the other dishes.

We hoped the potatoes would have a crisp exterior like those served with breakfast, Unfortunately these were soft and borderline soggy.

The rice was well cooked but there was nothing remarkable about it either.

While tasty, the mac n’ cheese did not seem to fit with the rest of the menu items. It was creamy with a nice cheesy flavor, but, again, it was nothing to write home about.

Similar to the vegan option at breakfast, the plant-based curry was flavorful.

But unlike at breakfast, this time it came with rice in addition to potatoes and vegetables.

The adorable, animal-inspired mini desserts came with a vanilla cupcake, a brownie and a chocolate layer cake.

The cupcake is super cute with its animal print ears.

Unfortunately, we also found that it was merely a simple, unfilled vanilla cupcake with plain vanilla icing.

We enjoyed the layer cake which combines a unique, honey flavored icing with chocolate cake.

It also came complete with a delightful sugar bee, reminiscent of our pal Spike the Bee, and a white chocolate honeycomb decoration on top.

The brownie had a nice, dense consistency with green matcha, meringue puffs, dollops of fudge icing and chocolate sprinkles. It was topped off with a white chocolate wafer decorated with the Tree of Life.

We had a slight disagreement over this item, as one of us really liked it while the other was not impressed.

It was complimented very well by the sliced strawberry and the crunchies that seem to be raspberry and passion fruit flavored.

This dessert featured a distinctive mix of flavors and textures.

We think you should do yourself a favor and make friends with your server so they’ll bring you this vegan dessert.

In the end we were not all impressed with our dinner at Tusker House. While we loved seeing the characters again, we found the food to be lacking. Overall, our experience at breakfast was far superior to dinner.

In addition, the vegan option was a disappointment. It was simply the potatoes, vegetables and rice from the non-vegan meal, but without the meat, and with the same Durban curry as breakfast. We felt they could have at least also offered a vegan version of the shrimp curry.

Will you be visiting Mickey and friends at this character dinner soon? Let us know in the comments!

Previous
PHOTOS: Norway Troll Statue Moved to New Location During Renovation of The Fjording in EPCOT