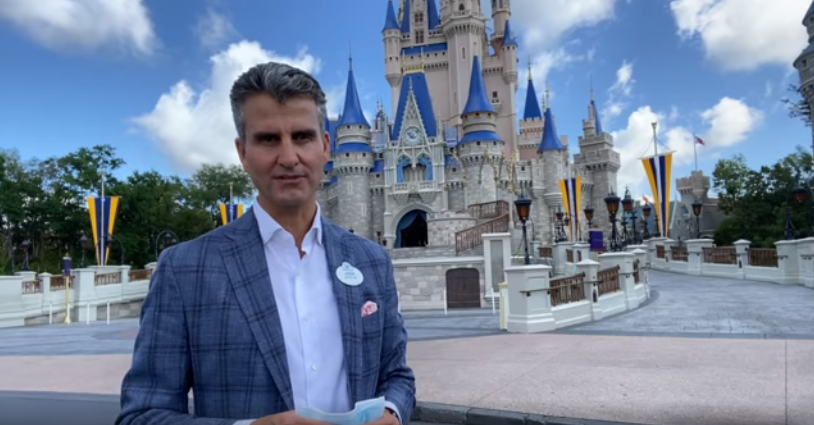 In an interview with the International Association of Amusement Parks and Attractions for their publication “Funworld,” Disney Parks Chairman Josh D’Amaro discussed the struggles of the last year and the innovations for the future.

D’Amaro, who stepped into the role at the start of the pandemic in 2020, was in a unique position of navigating an unprecedented situation. “You get that little bit of a pit in your stomach,” D’Amaro told Funworld, referring to the feeling after he accepted the promotion amid the chaos. “I was humbled by the situation I found myself in. Given where we were, I felt an immediate and massive sense of responsibility to be sitting in this role, for a place that I cared so much about, with so many cast members who were looking for guidance.”

He cites the Cast Members of Shanghai Disney Resort and Hong Kong Disneyland for the successful reopenings of Disney Parks worldwide. “In Asia, the team across the board just did an amazing job creating a blueprint. We then had a template that we could then take, adapt, and apply.”

D’Amaro also discussed leading the charge on the various inclusivity changes around the parks. “I will pay tribute to our founder, to our legacy, but I will also at the same time push us to be relevant today,” he said. “To add an inclusion key is so powerful.” He refers to the addition of a Fifth Key (Inclusion) to the infamous “Four Keys” of service that Cast Members strive to represent.

The addition of Inclusion to the tenets of the Disney Parks lead to a series of changes that are still ongoing, including an updated Disney Look for Cast Members and alterations to attractions and shows.

“We will continue to not only look at the experiences that we have today, update them, and make them relevant and appropriate, but as we build, we will also start to think about all the great stories that we have to tell around the world and bring them to life in a way that everybody again can see themselves,” said D’Amaro.

Funworld and Josh D’Amaro also discussed the future of Disney Parks. D’Amaro reiterated that some of the changes born from the pandemic are here to stay. He also took credit for the dissolution of the Disneyland Annual Passholder program, citing the same opportunity to “offer more choice, greater flexibility, and drive value for the resort’s fanbase” that we’ve heard before.