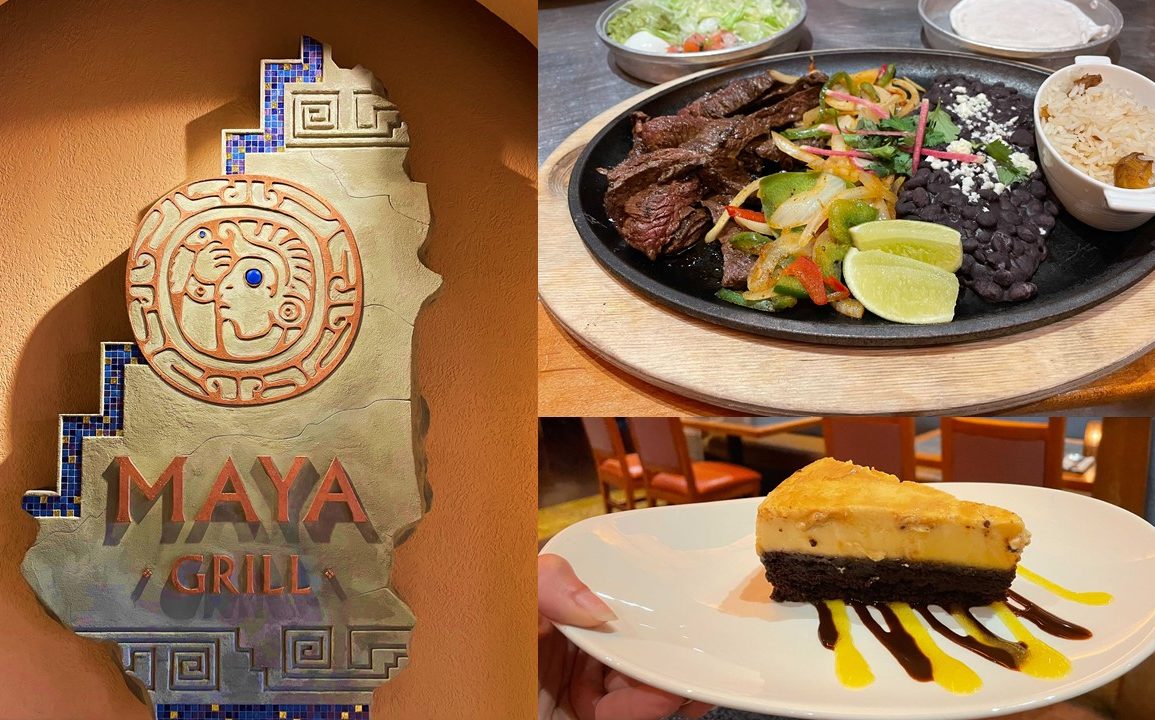 Maya Grill reopened at Disney’s Coronado Springs Resort on June 24, marking its return after being closed for more than 15 months. Excited for another dining option to make a comeback, we headed down Buena Vista Drive to check it out.

Maya Grill sits at the end of the resort close to the convention center, and offers a warm, casual environment for guests. The restaurant is currently open Thursday – Saturday from 5 p.m. – 10 p.m.

The restaurant is themed but not overly so. Architectural elements hint at a Mayan temple design. Everything is done in warm tones of golds, reds, and oranges.

Torch lights on the pillars flickered like they were real flames. The sun was a symbol traditionally used in Mayan culture.

One of the highlights of our visit was the guitar player. He played traditional favorites like “Under the Boardwalk” and “Moondance” but with a Mexican flair. The music was perfect: we were able to hear it perfectly but still have a conversation at our table. We hope this talented gentleman has a permanent home here at Maya Grill.

The dining room has large windows that overlook Lago Dorado. You can see Three Bridges Bar and Grill from here, but this rainy evening didn’t really suit an open-air bar in the middle of a lake!

After we admired the ambiance and the view, it was time to eat! We started off our meal with an appetizer and a flight of margaritas.

The nachos were very good but nothing really exceptional. They did not say they had meat on the menu, but they had quite a bit of ground beef in a tangy sauce. There were also ample toppings of diced tomato, green onions, jalapenos, and crema. The tortilla chips were very fresh, and the entire dish was a good portion. We enjoyed these, but next time we would try a different appetizer. Compared to the dishes to come, these were not worth filling up on.

The menu lists two different margarita flights – traditional and premium. However, we were informed that the restaurant did not have the premium tequilas in stock to make the premium flight. We went with the traditional flight.

The classic margarita was good but unremarkable. This, like the other two on the flight, tasted a little watery, like a lot of ice had already melted by the time we drank it.

The horchata margarita was the tastiest of the three, but it still tasted a little watery, and would have been better as an accompaniment for our desserts. We are also uncertain what made this a margarita – we didn’t detect any tequila flavor in the drink. It seemed like just horchata.

For dinner, we chose three entrees and one side dish from the menu, as well as a few more of the unique cocktails on offer.

On the paper menus we were given when we were seated — yes, they gave us paper menus without even asking — this dish was called out in a box, so we felt we needed to try it. The consensus: “huge win.”

The skin was crispy and well spiced. The meat was perfectly prepared and juicy. Getting a half chicken meant we could try both the white meat and the dark meat, and both were excellent. The poblano cream sauce had a delicious roasted pepper flavor without much heat, making it a perfect accompaniment to the crispy chicken. The slivered almonds added a nice crunch as well.

The chicken was served atop a generous pile of plantain rice, which made a perfect accompaniment. The sweet chunks of plantain in the rice went well with the chicken, complementing it without overshadowing the main dish. This dish was a lot of very good food.

We were glad we went with the beef fajitas instead of the chicken, because the beef was excellent. It was very tender and flavorful, and there was a good amount of it. The onion and pepper mix in the center of the dish was cooked al dente so you got a bit of a crunch in your fajitas. The beans had a nice, rich flavor with a hint of cumin, and like everything else, cooked just right.

The plantain rice was a little sweet for the rest of the ingredients, and was better eaten on its own as opposed to added to the tortillas with the rest. We also got the expected, and very fresh, side of lettuce, pico de gallo, sour cream, and guacamole. The menu indicated that jack cheese also accompanied the dish, but we didn’t see any. There was just a sprinkling of cotija cheese on the beans.

The tortillas appeared to be white corn, and were a nice small size. We felt like the initial serving of tortillas they brought with the entree – four of them – wasn’t enough for all of the ingredients, but they happily brought more upon request.

If you like cheese, this is the dish for you. This made up for the lack of cheese on the fajitas. The dish consisted of three chicken enchiladas, made with corn tortillas, in a tangy red enchilada sauce. They are served in a cast-iron skillet along with black beans, then covered in cheese and baked. The chicken was perfectly cooked, the sauce was delicious, and the cabbage slaw on top added a very nice crunch. The fried plantains were a sweet and substantial accompaniment to the dish. We learned later that you can also order the enchiladas with a green sauce, and we look forward to trying that next time. This wasn’t our favorite of the three entrees, but we would still order it again.

For as much as we enjoyed all our entrees, these Brussels sprouts were the real star of the meal. The sprouts are perfectly cooked so that they are tender yet have crunch. They are tossed with cubes of crispy bacon and a smoky-sweet chipotle sauce, then topped with cotija cheese. We could not stop eating these, and they repeatedly distracted us from all the other food and drink on the table. The sauce has a barbeque element to it and a heat that gently sneaks up on you. Each bite revealed more of the complexity of this dish. We would come back here just for these.

You could clearly taste the main ingredients – gin, ginger, and lime. This rickey was tart and not sweet at all. If you want a little sweetness to your drink, you will not find it here, but it was very good and refreshing.

This old fashioned was a standout. With some bourbon fans in the group, we were both intrigued and skeptical of the spiced oil and the chocolate bitters, but we were very pleasantly surprised by how well the flavors blended. The complexity of the drink was remarkable, and each sip highlighted a different aspect, from the bourbon to the spice, to the chocolate to the muddled cherries. This unique take on a classic cocktail is now one of our favorite old fashioneds on property.

Though we were not particularly impressed by any of the margaritas in the flight, we decided to give another margarita a try. This is a Mexican restaurant, after all! The El Diablo margarita did not disappoint. The combination of flavors of cucumber, lime, and agave resulted in an almost melon-like flavor. The jalapeno added a heat that balanced the sweetness perfectly and was further enhanced by the hibiscus salt rim. It was sweet, spicy, and sour all at once.

What really put this drink over the top was the presentation. It is served tableside in a French press and poured into the margarita glass while you watch. This gave the drink an extra special feel, and extra special serving size. There was more margarita in the press than fit in the glass, so we really had closer to one and a half margaritas from the serving.

Chocolate Cake and Mexican Flan with Chocolate and Mango sauces

First, let us clarify that impossible is an adjective in this dish, not a brand of meatless meat. What makes it “impossible” is that it is very difficult to get flan to stick to anything, and yet this cake is half flan which sticks nicely to half chocolate cake. The problem, however, is that in order to make that happen, they must have needed to add something to the flan. It tasted like an ordinary flan, but the texture was almost like cheesecake. The chocolate cake was dense and rich, but didn’t seem like it was really meant to go with the flan. The mango sauce also wasn’t the best complement to the dish. It was unique, but also kind of weird, and not something we would order again.

We saved the best for last for you on this dining review. Whatever else you choose off the menu, be sure to get these churros. None of us at the table are huge churro fans, but we all agreed they were amazing and the best churros we have had on property. If you are tired of stale and boring churros, these will restore your faith. They are perfectly tender on the inside and exquisitely crunchy on the outside. The cinnamon sugar crust has just a hint of chile for an unexpected zip, and is complemented so well by the caramel sauce and the dulce de leche ice cream.

We could not stop remarking over how good every bite was. Even when the ice cream had melted and soaked into the churros, the flavor and texture were just perfect. We were stuffed from our meal, and yet we ate every speck of this dessert.

We went in with few expectations for this meal and were really impressed with the food, the drinks, the ambiance, and the service. There were a few misses, but overall the meal was extremely enjoyable and a very good value as far as Disney dining goes. And it’s very conveniently located if you wish to enjoy an after-dinner drink at the Dahlia Lounge atop Gran Destino Tower, which is a favorite spot of ours.

Next
PHOTOS: Woody Woodpecker Brings the Stars and Stripes to Universal Studios Hollywood for 4th of July