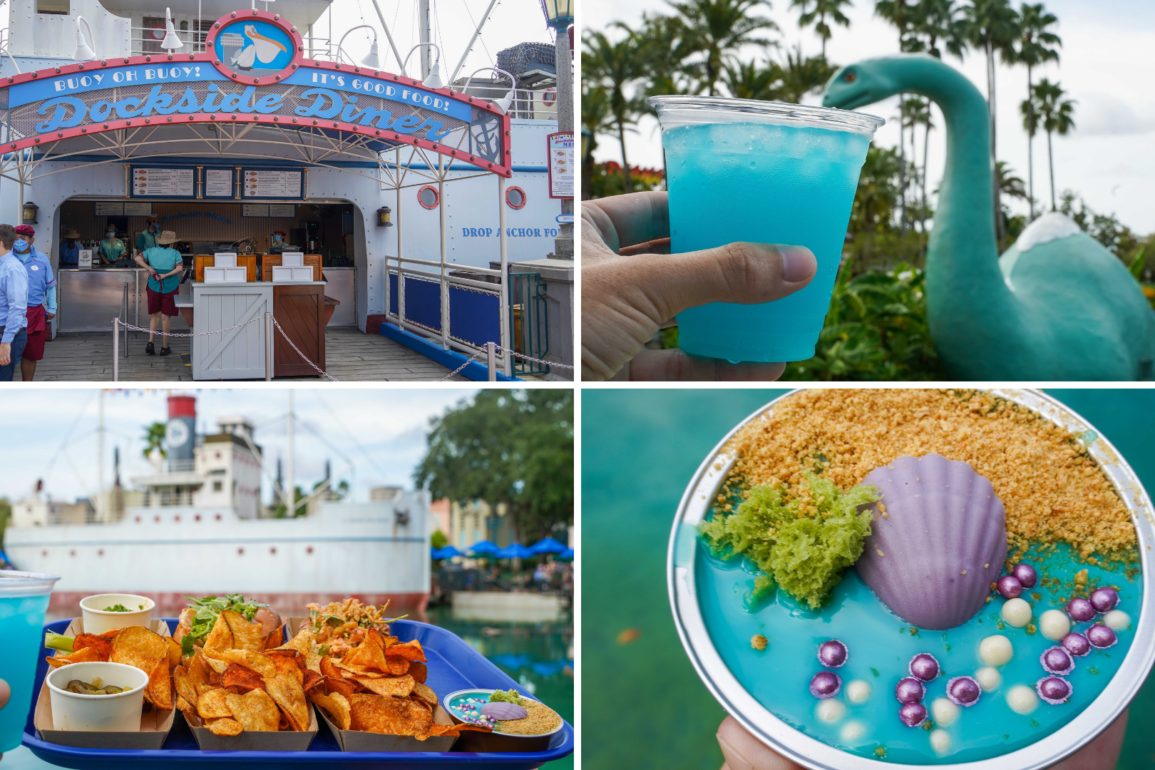 Dockside Diner has reopened at Disney’s Hollywood Studios. The revamped menu includes three new entrees, a Blue Sea Margarita, and a Seaside Brownie. We were there when the quick service location reopened. Let’s check out the new offerings.

The quick service location is inside the S.S. Down the Hatch.

Ours was the first order of the day. Cast Members were kind enough to mark the occasion by posing for a photo.

Despite the numerous ingredients in the shrimp roll, its taste is very basic. It is chilled shrimp on a bun with a light amount of sauce.

Sometimes, simple is good. The dish is light and straightforward. If you like shrimp, you will enjoy this.

Unfortunately, the smoked fish dip is mostly mayonnaise and vinegar. It has little to no fish taste. While avoiding “fishiness” is not always a bad thing, we expected this to be more fish-forward.

The chipotle chicken salad roll is the star of Dockside Diner’s return.

It has a generous portion of tender chicken mixed with a delicious chipotle aioli. We found this to be perfectly spiced.

The fried onions add a bit of crunch. The buttered brioche roll is soft and tasty.

We would absolutely order the chipotle chicken salad roll again.

The pre-mixed margarita is only slightly above basic. It has a syrupy, sweet and sour base.

The blue curaçao adds a nice bit of fruitiness to an otherwise plain margarita.

We could taste the tequila; it was smooth, as we expect from Patrón.

The Blue Sea Margarita is fine, but we recommend a visit to Tune-In Lounge for cocktails, especially at this price point.

While it looks impressive, the Seaside Brownie is a standard Walt Disney World brownie below the oceanic toppings.

The unspecified blue topping is slightly runny and flavorless. The white chocolate ganache is equally flavorless.

The brownie itself is dense and rich, but not unique. We recommend this treat only for its visual appeal.