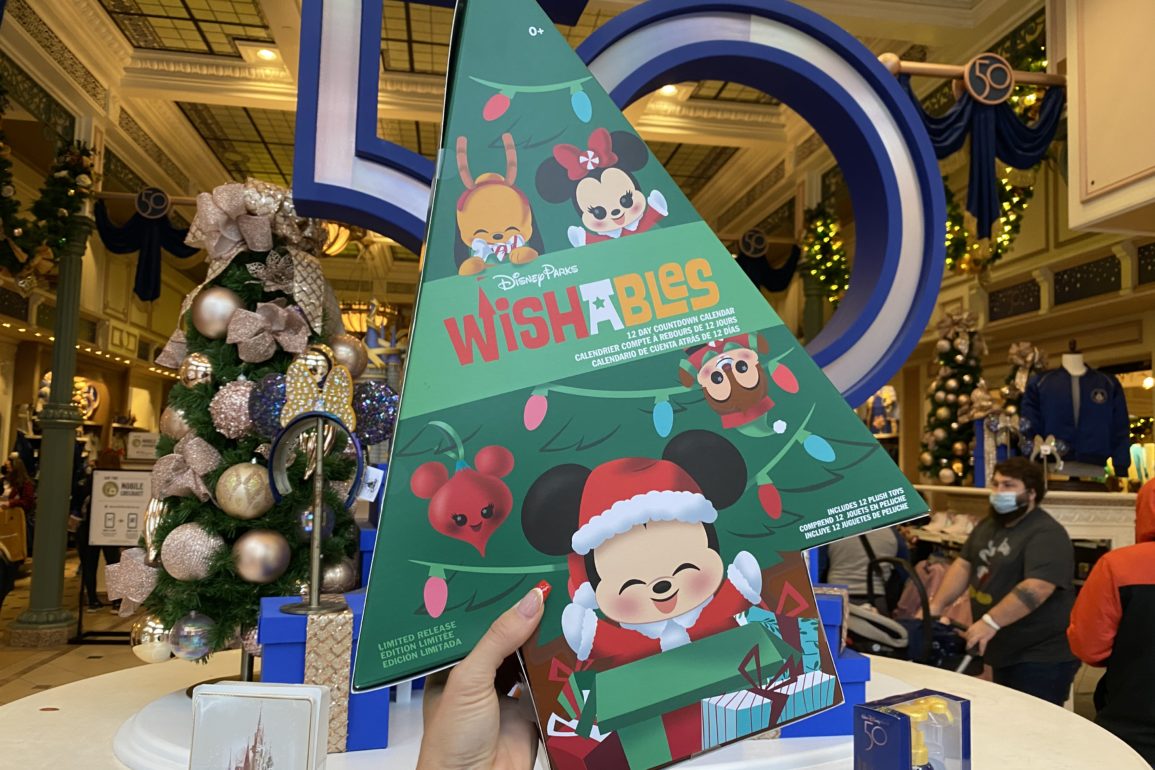 Season’s greetings from Magic Kingdom! It’s almost Christmas and you can feel the holiday cheer in the air today and we’re excited for the return of daytime parades with Mickey’s Once Upon A Christmastime Parade viewing today.

Before heading into the park, we checked our Genie+ Tip Board for the days suggestions and noticed that the daytime parade now has a Lightning Lane available to book.

The Emporium had a LOT in store for us today, so buckle up because we have the gift guide for you! The 50th anniversary sequin EARidescent Spirit Jersey sparkled onto racks this morning in the “Celebration” room. Be sure to check our daily merchandise roundup for full details and pricing of all of the items we found today!

Who wouldn’t want these absolutely adorable holiday Wishables Advent calendar?! The large box has 12 Wishables in their holiday best. Details of all of the Wishables and their contents can be found here.

Wishables Wednesday continues with Fantasmic! Wishables sweeping in featuring some of the most notable characters from the show that will return in 2022.

The Lion King Wishables are also available in The Emporium, but we had to take them over to Adventureland later for a wild photo shoot.

Nuimos normally drop on a Monday, but we had quite a bit of new items from the line. Rapunzel, Chip’n’Dale, and a plethora of holiday outfits donned the shelves just in time for Christmas and New Year’s Eve parties.

We first saw the new Woody shoulder plush make an appearance in Disneyland, but he has finally made it to Walt Disney World!

A collection we haven’t seen before, a variety of plush tucked inside of retro looking VHS boxes are at the front of the shop giving us a blast from the past.

A new 50th anniversary Reyn Spooner button up is also back in the “Celebration” room and features all 4 of the park icons with fireworks and a “50” pattern.

Finally done with our shopping at The Emporium, we made our way over to Tomorrowland to hitch a ride on the Peoplemover to check in on TRON construction.

A lot of the progress is being made on the railroad tracks in front of the attraction as well as near the entrance where arches are being built. The large crane that makes an appearance from time to time was out today for the action.

Passing back by the central hub as we worked our way around the lands, the Lightning Lane area for the parade was set up as a small section right in front of the castle.

The final “Magic in the Stars” limited edition pin is at Frontier Trading Post and features Meg and Hercules.

Once we finished our rounds, we got in place for the 12PM daytime viewing of Mickey’s Once Upon A Christmastime Parade, the first daytime parade back since 2020!

We even got to wave to Santa as he passed by!

Over at Disney’s Polynesian Village Resort, the new 50th anniversary resort themes kitchenwares have been restocked after selling out the first day.

Just out back of the Grand Ceremonial House, Pineapple Lanai held another sweet Christmas surprise for us with a new ‘Olu Mel Christmas Dole Whip Float!

The festive green tinted float has a super cute ‘Olu Mel read for the holiday season.

The cast member walkway from the parking lot to Disney’s Polynesian Resort is seeing some major progress as well.