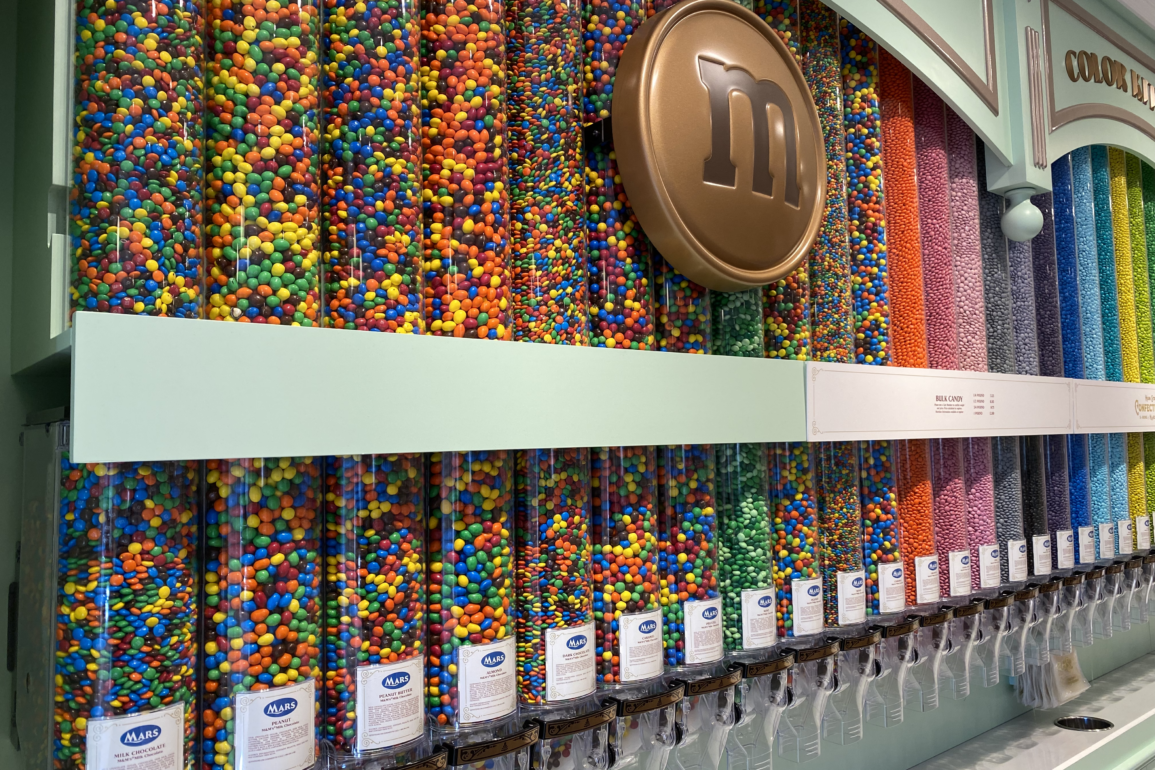 On our way to take the ferryboat from the Transportation and Ticket Center to the Magic Kingdom, we noticed the ferryboat ramp recently installed has been relocated again. Pilings are in place around where it stood and a new walkway structure is being built near its supposed entrance.

Inside the park at The Emporium, new carpet has been installed in half of the “Apparel” room. The carpet matched the older pattern.

More mobile checkout signs have been placed around The Emporium, this one informing Visa Cardmembers to utilize the checkout at a register to receive their rewards.

Uptown Jewelers has a new CRISLU 18K “Fantastic Five” gold necklace for $125 and bracelet for $100 available. The jewelry has Minnie, Goofy, Mickey, Donald, and Pluto each with a crystal on their character face.

The M&M wall inside of The Confectionery is missing a little holiday cheer today as the Christmas M&Ms appear to be out or removed from the wall of candy.

A “Here For It” Mickey Mouse bejeweled premium ice cream bar pin is at the Camera Center for $17.99.

A few of the 50th anniversary banners on Main Street U.S.A. are missing their gems, while some still have one only on one side or none at all.

A fab new Mickey Mouse collection was released at Star Traders in Tomorrowland.

Walls are up at TRON: Lightcycle Run as the mystery structure is built in.

A shiny layer of solvent is poured over a portion of the Adventureland Jungle Green pavement after its completion.

White 50th anniversary EARidescent balloons are now available on Main Street U.S.A. where previously you could only find them at Disney’s Hollywood Studios.

Speaking of glitz and glamour, we made our way over to the park later in the afternoon! Scrim is still up around the television screens above the ticket booths and a new 50th anniversary EPCOT banner is in the display case.

A guide map to “Celebrate the Holidays at Disney’s Hollywood Studios” is available next to the park maps that includes “festive fun” and “tasty treats.”

The dressing rooms at Legends of Hollywood have reopened. They had closed briefly after reopening earlier this year and are now open for guests again.

Scrim still covers the entire left side of Sunset Club Couture as it is still being refurbished.

A new Vault engravable ID tag featuring anniversaries past is available at The Tower Shop at the exit to Tower of Terror.

“Meet Mickey” at Red Carpet Dreams is still covered in a black velcro drape as Minnie Mouse is only one currently greeting guests.

In Star Wars: Galaxy’s Edge, characters are appearing in more locations including Rey and Vi Moradi at the X-Wing.

Mrs. Incredible was missing from the Pixar Pals Motorcade today, although all of the other usual characters were present.

Before heading out, we made sure to wave to Gertie, who appears to have had a small hat mishap. Hold on, Gertie! We’re getting the ladder!