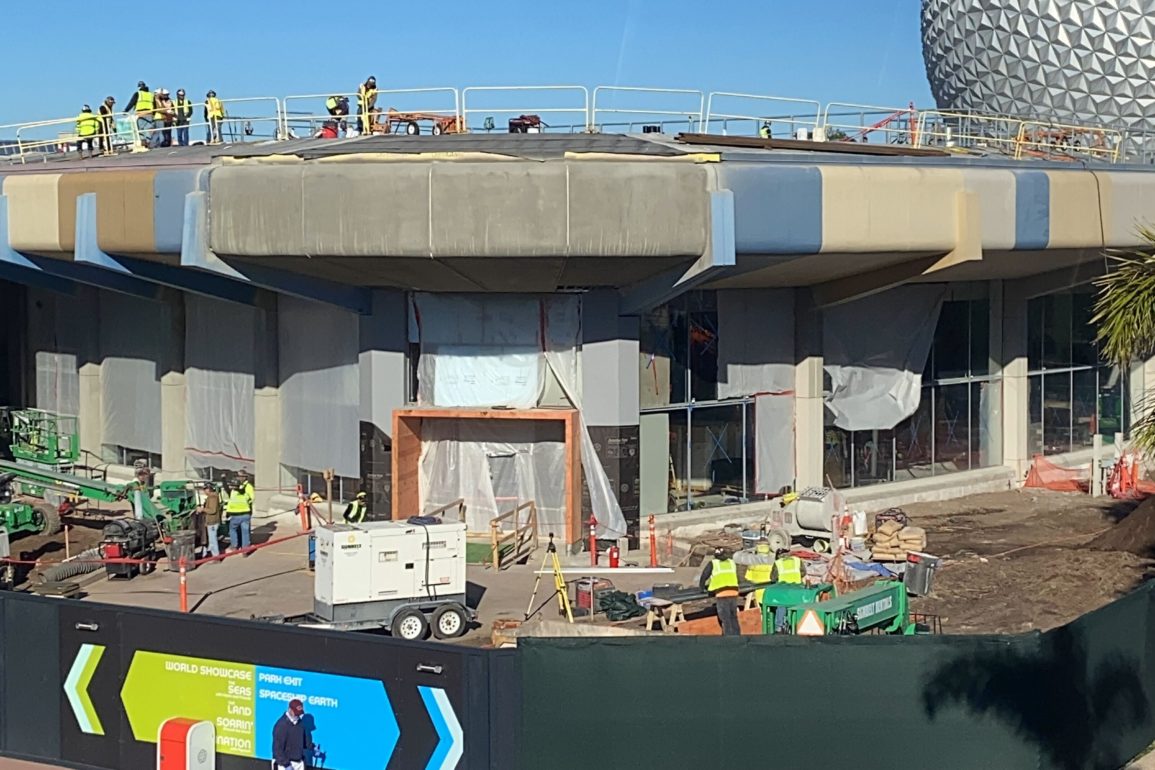 Crews have completed construction on the rounded corner. Though they have yet to paint, they have removed the scrim and scaffolding.

An entrance archway has also been installed.

Tarps hang over many of the windows and the entrance.

We saw crew members both on the ground and on the roof this morning.

From the ground, we got a better look at the underside of the corner.

Some sections of the overhang near the wall remain uncovered. Jumbo Tex weather-proof sheathing is on either side of the entrance.

New concrete is over the columns between windows.

The crew members will soon repaint the overhang and columns to match the rest of the building.

In the breezeway, we haven’t seen much progress since windows were installed.

This area also needs to be repainted.

We’ve been seeing colorful lighting tested inside the building and today green lights were on.

The green lights surround the walls creating a corner inside. Orange strips of light are on the ceiling.

Meanwhile, the land between World Discovery and World Nature remains mostly covered in dirt as construction continues on Dreamers Point and Journey of Water.

The exterior of Connections Café on this side has seemed mostly completed for some time, though work may still be ongoing that we cannot see. Dreamers Point will be behind Spaceship Earth.

Journey of Water Inspired by “Moana” will be a new walkthrough attraction full of interactive water features.

For now, the construction site is mostly shifting piles of dirt and a few small concrete structures.

The white tents near the construction walls are where workers take their breaks.

Orange netting and barriers create protective fencing around trenches and holes in the ground. There is also some wooden fencing along the paved walkway cutting through the dirt site.

Some grass and trees are near the break tents.

We could see a crew member working on the side of one structure.

There is no opening date announced for Journey of Water, Dreamers Point, or Connections Café and Eatery.