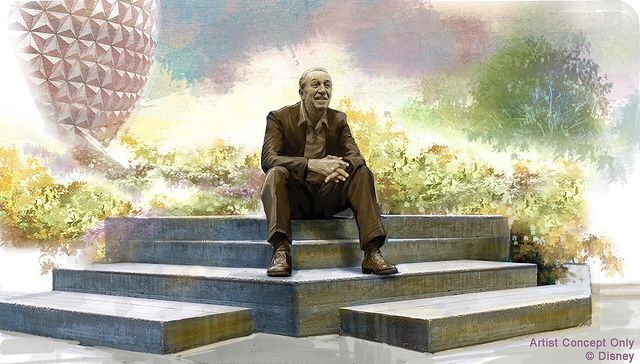 Today marks a very special day in Disney lore, also known as Walt Disney Day, in celebration of Walt’s birthday. Walter Elias Disney was born on December 5, 1901, and while he never got to see the completion of his groundbreaking Experimental Prototype Community Of Tomorrow—or EPCOT Center as we came to know it in 1982, the park’s historic transformation will bring an all-new statue celebrating the legacy of the original dreamer, Walt Disney.

Known as Dreamer’s Point, the statue will be located in World Celebration, where as guests exit the (potentially refurbished) Spaceship Earth, they’ll be welcomed further into the park with breathtaking views of World Showcase. In honor of Walt Disney’s birthday, Imagineer Zach Riddley posted the concept art above along with the following caption on Instagram, once again confirming that the Dreamer’s Point project is still alive and well:

Today – on Walt Disney’s birthday – we are reminded of his legacy of hope. Walt showed us all the potential we have to dream of a better future and how important and special it is to bring that future to life.  As we shared at D23 Expo last year, that dreamer’s spirit inspired us to feature a new statue of Walt as part of the new World Celebration neighborhood in EPCOT, in a location we are appropriately calling Dreamer’s Point.

Walt said, “EPCOT will always be in a state of becoming…” and it’s that spirit of potential and possibility that inspires all we are bringing to life in the transformation of EPCOT.

In celebration of today, I hope you’re encouraged to dream big and inspire others as we dream of a better future we can make a reality together.

Also slated for World Celebration are “beautiful natural environments and global design elements filled with Disney magic and surprises, including a wishing tree in an enchanted forest”, but at this point in the budget-cutting process, that could well mean a field of astroturf. In any case, we’re happy that this icon has not been cut from the initial plans for the EPCOT transformation as announced during last year’s D23 Expo.

Are you looking forward to seeing the new statue and taking in the sights from Dreamer’s Point? Let us know in the comments below!