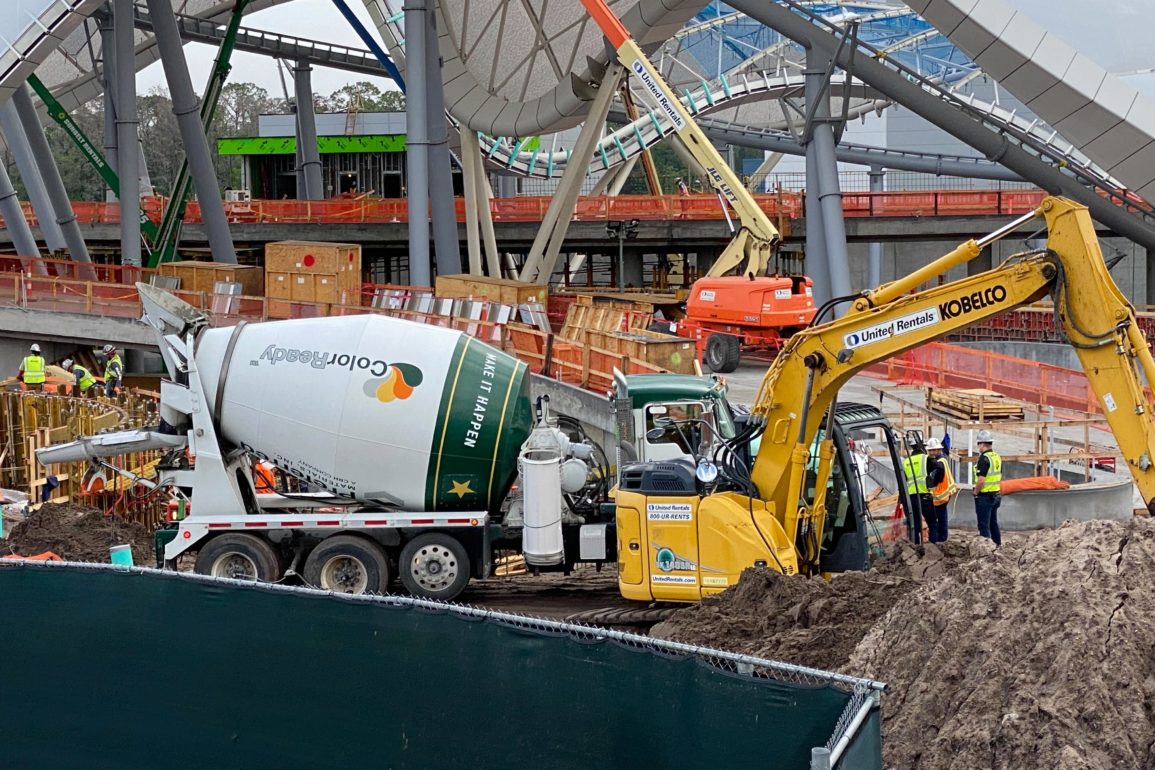 We have yet to see any trains being push-pull tested at TRON Lightcycle / Run in Magic Kingdom, but there’s still construction to see around the new Tomorrowland coaster.

We can see some of the attraction from Storybook Circus.

A large portion of the canopy framework has now been covered with canopy pieces.

More paneling has been installed along the edge of the canopy framework.

The panels sit between vertebrae-like pieces. They will eventually line the entire exterior portion of the coaster.

More panels will be installed between the vertebrae pieces sticking up.

Crew members in cherry-pickers were working on the underside of the canopy.

Some blue netting hangs from the canopy, not yet discarded.

The netting is temporary to protect crew members working above the canopy.

We could see buckets atop the canopy.

Green sheathing has been added to the final section of the lockers building visible on this side.

Crew members were also working on the roof of the building.

The sheathing will soon be covered in the final paneling.

From the Tomorrowland Transit Authority PeopleMover, we got a look at the rest of the exterior coaster.

Crew members were installing panels on the edge of the canopy facing Tomorrowland.

Some of the new paneling is still protected with grey sheets.

About half of the canopy has been installed.

We could see more green sheathing on the lockers building from this side.

On the ground, crew members have been working on a second walkway. A concrete pouring vehicle was parked at the entrance to the walkways.

There was also a digger, which has been used to move dirt out of the way.

One walkway goes beneath the other, possibly as an exit while the other will be an entrance.

Construction crates and materials sit on the main walkway.

The walls lining the second walkway are still mostly made of wood, but there is some concrete already in place.

Rebar sticks out of the ground.

The Walt Disney World Railroad will also go under the coaster through a tunnel.

White paneling lines most of the canopy on this side.

The tarp blocking the main entrance was recently removed. A black tarp does hang further down the walkway now.

Green sheathing is also visible above the main entrance.