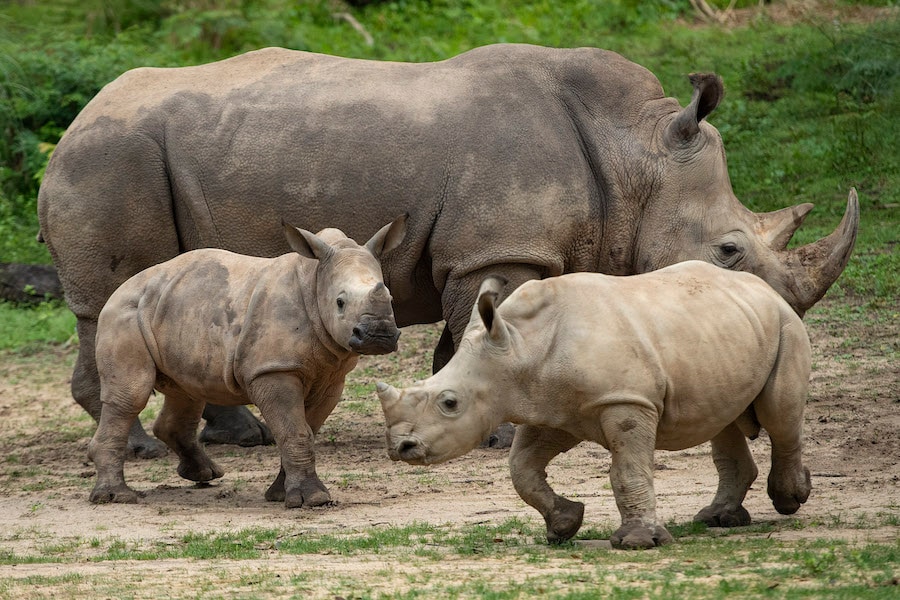 The newest member of the rhino family at Disney’s Animal Kingdom, Logan, can now be seen out on the savanna.

Mother Lola gave birth to Logan back in early November of 2021. Logan was the third white rhino born at the park in the past 16 months and the thirteenth born at Walt Disney World.

And last week, Logan was finally able to join her siblings, Ranger and Mylo, out on the savanna. Watch the full announcement below:

“One of the most exciting milestones for our team of animal care experts is introducing an animal to Kilimanjaro Safaris at Disney’s Animal Kingdom Theme Park. Four-month-old Logan’s debut on the savanna this week was extra special, as it was the first time rhino siblings Ranger, Mylo and Logan were out together, and guests were able to see this adorable trio in action.

Ranger marked the first white rhino birth at Walt Disney World Resort in five years in October 2020, with Mylo joining the crash (herd) in September 2021. Logan, born in November 2021 and aptly named after her mom Lola and dad Dugan, is the youngest of the three southern white rhinos born at Disney’s Animal Kingdom Theme Park.

These successful rhino births are a major achievement for our team and the rhino population in managed care. All three rhinos allow us to learn more about this incredible species, and these learnings can be shared to benefit rhinos worldwide.

It takes a lot of teamwork to bring one rhino to the savanna – let alone three for the first time in the park’s history! As incredible as it is to see three rhino calves roaming around together, what is truly amazing is our Animals, Science and Environment team that helped make it a reality starting more than two years ago. The coordination of our scientists, veterinarians, animal keepers and so many other cast members was crucial to this success story.

So, what does this process include, exactly?

Selection through the Species Survival Plan
The process begins with lots of planning and logistical preparation. Many factors influence the pairing of rhinos through the Species Survival Plan overseen by the Association of Zoos and Aquariums to ensure the responsible breeding of endangered and threatened species in managed care. The genetic diversity of the rhinos selected is one of the most important factors, and pairing genetically unrelated individuals helps ensure a healthy animal population for generations.

Animal Nutrition
Our team of animal nutritionists monitor the diets of all animals in our care to ensure they receive the nutrients they need. Once the rhinos are paired, their diets can be further adjusted as needed for pregnancy, lactation and growth.

Endocrinology
Before any introductions are made, our team of animal endocrinologists monitor specific hormone patterns that change after ovulation and throughout the rhinos’ pregnancy. This tracking is possible because the rhinos are trained to voluntarily participate in their own care, allowing our team to collect blood samples and feces to monitor hormones related to ovulation and pregnancy. Once the appropriate timing is determined, breeding can begin through a carefully controlled process.

Veterinary Care
Our animal health team works with endocrinologists and animal keepers to monitor the animals throughout their long pregnancies. Quick fact – rhinos have one of the longest gestation periods of any animal! During this approximately 16 to 18 months, the health of the mom and baby are monitored through regular checkups and ultrasounds. Through these ultrasounds, the team was able to watch Logan grow from a ball of cells to the 160 pounds she weighed at birth.

Animal Care and Training
Through training sessions, our animal care experts work with each mom individually to participate in regular checkups throughout her pregnancy. This helps ensure the health of mom and baby.

Once the rhino calf is born, mom and baby will spend months backstage bonding. During this crucial time, the keepers will ensure the calf is nursing and growing. This time also allows keepers to focus on each animal and teach important training behaviors so the baby rhino is set up for success and social life on the savanna. Once the calf is ready, keepers work with the rhino calves to slowly introduce them to the rhino crash and the many other animals on the savanna.

Rhino Conservation
White rhinos are a very social species, and they’re constantly learning from each other. Just as they pass along important behaviors like sparring and wallowing in the mud, with each successful rhino birth our team is able to better understand and share vital information on the many dynamics of rhino fertility. These learning experiences lead to an even higher quality of care for this special species and can be put into practice to help future rhinos born in managed care as well as their counterparts found in their range countries.”

Logan is just about five months old now and weighs 530 pounds. Logan’s name is a nod to her parents, Lola and Dugan.

Get a glimpse at Logan and her siblings on the savanna aboard Kilimanjaro Safaris at Disney’s Animal Kingdom.