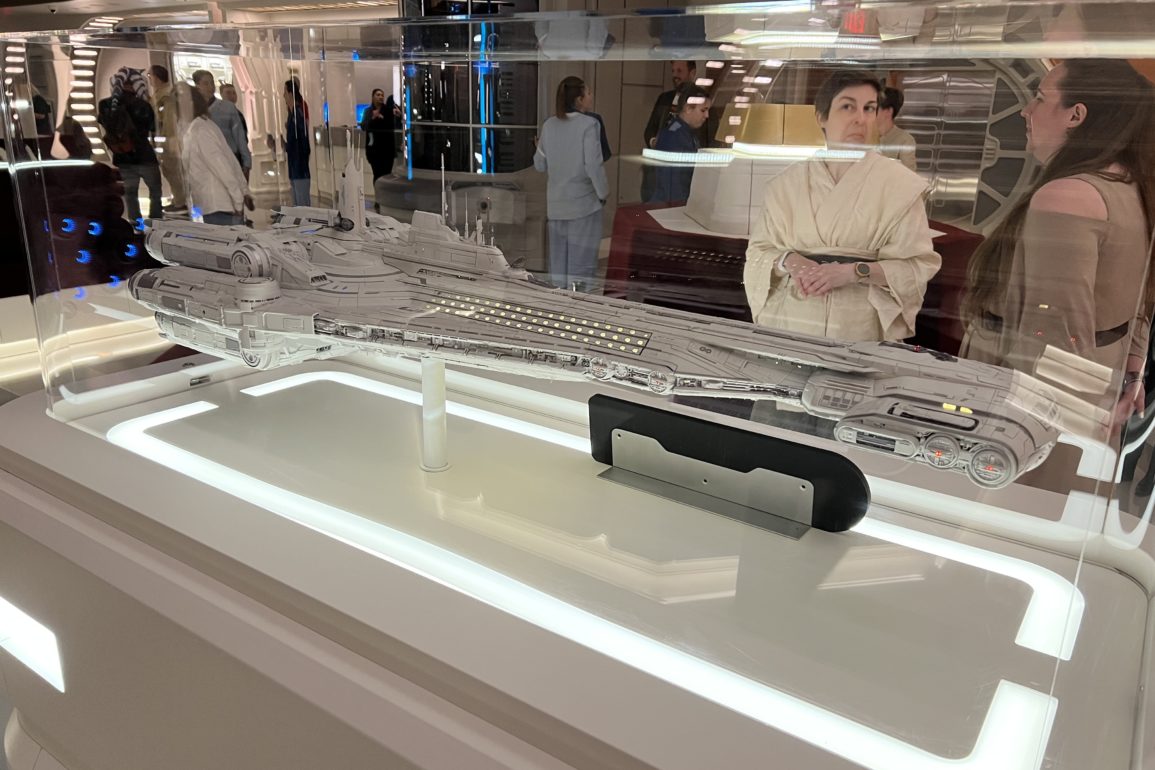 Start Your Star Wars: Galactic Starcruiser Journey with a 15-Minute Guided Tour of the Halcyon

After checking in and riding the launch pod to the Star Wars: Galactic Starcruiser, we were given a 15-minute guided tour of the Halcyon. Let’s check out the ship!

The 15-minute guided tour begins in The Atrium. The Atrium is where a majority of the activities take place, and it’s the first thing guests see after exiting their launch pod.

The model of the Halcyon in the atrium represents the guests aboard moving together as one.

The Halcyon has 13 decks, though guests only have access to decks 4-7. The ship also has 13 engines, as 13 was designer Shug Drabor’s favorite number.

At one point, the Hutts owned the Halcyon. At that time, the atrium was filled with Sabacc tables. The Chandrila Star Line, wanting a more family-friendly feel, did away with most of the tables, but left one in the Sublight Lounge as a nod to the ship’s history.

The flooring of the atrium had to be redone after the Hutts’ ownership as the original flooring was destroyed by their acidity. But fear not, the floors are now Hutt-friendly! They’re made of crushed gemstones and inlaid with rock from Chandrila.

The crimson fabric you see on the bench cushions once covered the atrium ceiling. When the Galactic Empire owned the Halcyon, they used it as an officer’s retreat. Not wanting the officers to get too comfortable, they pulled the crimson fabric off of the ceiling and exposed the elements we see today.

If you look up onto deck 8, you can see a map of the galaxy. This piece of art is called “The Unified Galaxy”. The map was a gift from the New Republic and presented by Leia Organa after the fall of the Galactic Empire.

Next to the Passenger Services Desk, you’ll find the Hyperspace Compass. The compass was owned by Shug and is over 1,000 years old. In fact, this storied compass inspired the logo of the Chandrila Star Line.

275 years ago when the Halcyon began its journey, the hyperspace compass was used to navigate the galaxy. In modern times, navigational computers do all the calculations. But it’s still preserved as part of the ship’s history.

The plaque reads: “Hyperspace Compass. Restored by our founder Shug Drabor in the earliest days of the Halcyon travels.”

The Sublight Lounge is the bar. It’s where the grab-and-go meals are served, and also hosts activities like holographic Sabacc.

While visiting the Sublight Lounge, we learned about a special bottle of Chandilan red wine. The story goes that Shug went to break a bottle of wine on the Halcyon to christen it, but it didn’t break. As the Halcyon went through a tumultuous history, the unbroken bottle of wine became a symbol of good luck. Guests on the Star Wars: Galactic Starcruiser are invited to continue the tradition of placing their hands on the bottle for good luck!

After we got a full overview of the features in The Atrium, we took the stairs down to deck 4. There, our guide gave us more information about the Climate Simulator.

The Climate Simulator on board the ship helps passengers acclimate to the climate of Batuu before journeying to Black Spire Outpost on the planet Batuu. It’s also handy for guests who need to see sunlight and breathe fresh air during their journey.

It was important to Shug for passengers to be connected to the destination, so he created the Climate Simulator.

The large rocks seen in this area are pulled from the seas of Chandrila. This is meant to symbolize that no matter how far you are from home, there’s always a piece of home in your heart.

The walls of the climate simulator are lined with plants from all over the galaxy.

You can use the translation feature on your datapad to read the Aurebesh names. This particular plant is Bakuran Fire Philodendron from Bakura, a planet in Wild Space.

For more information about the Climate Simulator, click here.

After the Climate Simulator, our guide walked us back past the Engineering Room and showed us to the Crown of Corellia Dining Room for lunch.

Watch our 15-minute guided tour below.