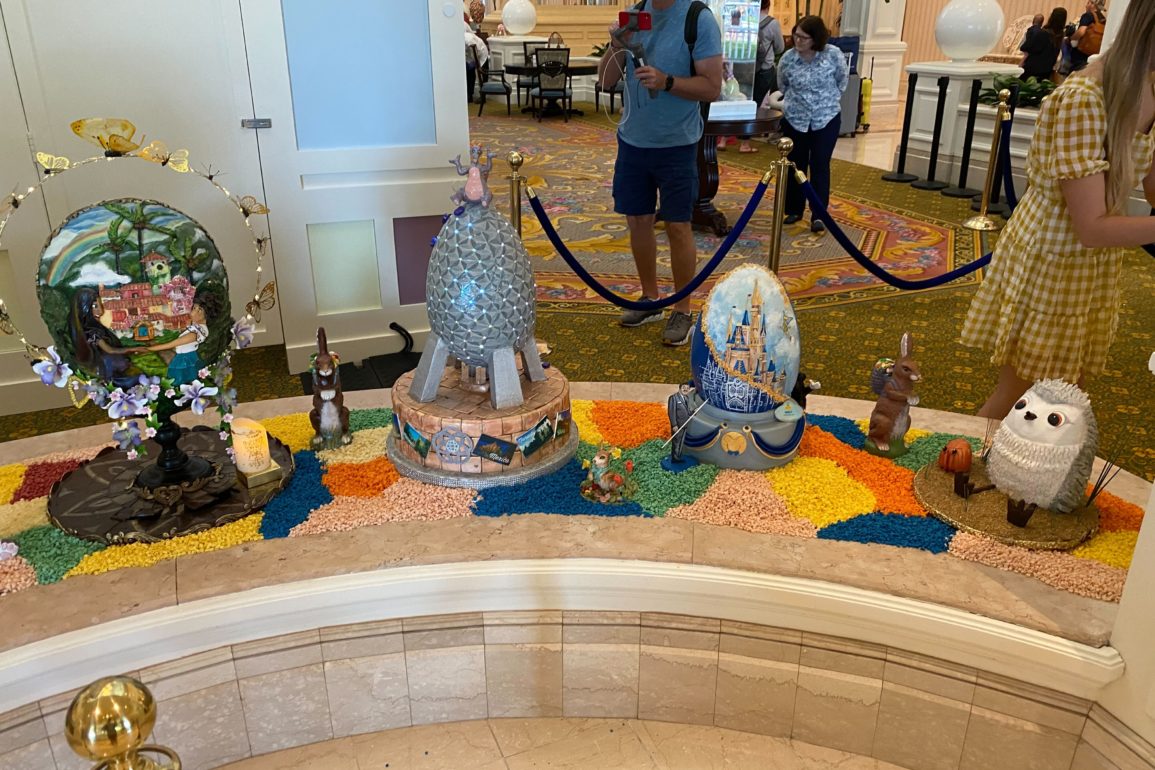 Disney’s Grand Floridian Resort & Spa is celebrating Easter season with 25 hand-painted “egg” displays. The eggs are made out of chocolate and other sweets. We already took a look at the 50th anniversary Cinderella’s carriage egg, but now the rest have been set up.

The eggs can be found behind The Grand Cottage in the lobby of Disney’s Grand Floridian Resort & Spa.

Each egg is inspired by a different Disney movie, franchise, character, or park.

The “Luca” egg resembles the poster for the film, with Luca and Alberto half in the water, showing both their human and their sea monster selves.

The town of Portorosso rises behind them.

The “Luca” logo is at the bottom.

Raya and the Last Dragon

This egg has an open front, with a molded Raya figure standing in the center with her sword.

White flowers and green vines adorn the outside of the egg.

Tuk Tuk is at the base with bamboo.

It’s golden, with the White Rabbit pictured among golden roses.

A red crown is on top.

More red roses are on the base.

This egg resembles an Easter basket with a purple bow on top.

Remy is pictured in the basket. Smaller eggs feature the faces of various “Ratatouille” characters.

The egg sits on a chocolate version of the “Anyone Can Cook!” book, with a frying pan of ratatouille on top.

Rabbit figurines surround the eggs for an extra touch of cuteness.

The “Frozen” egg is in a display case.

Elsa is on one side, blowing ice and snow around her.

Hans sits atop his horse while the trolls hide among rocks.

Anna stands next to Olaf, Sven, and Kristoff.

This egg resembles the bird from Pixar’s short “Piper,” with her legs sticking out on a sandy base. Her hermit crab friend is next to her.

Walt Disney stands in front of this egg, which features Cinderella Castle.

Tinker Bell has left a golden stream of pixie dust across the castle, splitting it into its current form and a blueprint of it.

A nametag for Walt sits on the base, which is decorated with blue and gold banners.

The Casting Agency door from Main Street, U.S.A. is pictured on the back.

A Mickey figure stands next to it.

The EPCOT egg of course looks like Spaceship Earth, and it even lights up with its own “points of light.”

The lights change color, from red to green to blue.

The brick-like base is covered in postcards of the different World Showcase Pavilions.

Figment’s purple footprints run along the back of the egg.

The “Encanto” egg features Mirabel and Isabela from the “What Else Can I Do?” number.

A circle of lights and yellow butterflies is around the egg.

The casita and a rainbow is pictured behind Mirabel and Isabela.

Purple flowers run along the bottom of the egg. The base resembles the tile floors of the casita, and the candle from the film is sitting on it.

The back of the egg features the door and family mural from the end of the film.

This egg is relatively simple. The egg itself is a speckled light green.

The base resembles a green field with flowers. Different Disney horses are dancing around the egg’s silver stand.

This white horse is Maximus from “Tangled,” while the brown is Philippe from “Beauty and the Beast.”

This white horse is Kjekk, Anna’s horse in “Frozen.” The black horse is Angus from “Brave.”

This egg resembles a blue “hunny” pot with bees buzzing around it.

Rabbit’s “kerit” patch is on the base, as are flowers and honeycomb.

Grogu is looking worse for wear in his egg-shaped crib.

The base has his Mythosaur necklace and the blue macaroons he eats.

One of his favorite frog snacks is behind the egg.

Rabbits are sat throughout the displays.

This egg features some of the Avengers in front of the New York City skyline, including Stark/Avengers tower.

Captain America, Black Widow, Hawkeye, Groot, and Iron Man are on the front.

The Avengers logo is on the silvery base.

The Hulk, Rocket, Captain Marvel, Thor, and Spider-Man are on the back, with Asgard in the background.

The frog is surrounded by rocks and reeds.

The base has mushrooms, dragonflies, and tree roots.

A lily pad sits on the top.

This “Treasure Planet” egg sits atop a base of chocolate coins.

The “Treasure Planet” logo is at the front.

The open egg has the golden orb inside, projecting its blue and green map.

The back of the egg has a spacey design.

This egg features Stitch on the beach.

White flowers surround the egg, which sits atop a surfboard featuring the same red and white pattern of Lilo’s dress. The base is covered in tiny numbered balls representing all of Stitch’s siblings.

A hammock is painted on the back of the egg.

This egg in a glass display case is inspired by the original “Alice in Wonderland” artwork by Sir John Tenniel.

Humpty Dumpty himself is pictured all-together reaching his hand out to Alice.

The Cheshire Cat can also be seen in a tree.

This isn’t an egg, but is the biggest rabbit figure in the display.

It’s a brown rabbit, with a basket full of eggs on its back.

After our initial look at Cinderella’s carriage, Cast Members moved it off its wagon onto a shimmering purple pile of fabric.

It is also now surrounded by rope.

There are small fairy lights shining beneath the carriage’s flowers.

Chip and Dale are fighting over their own painted egg atop this display.

More tiny eggs, including one inspired by Mickey, are on the grassy base.

This egg features the unicorns from “The Pastoral Symphony” segment of “Fantasia.”

A pink tree hangs over the unicorns.

The unicorns are painted on the egg, while tiny three-dimensional flowers decorate it.

This display includes two egg shapes making the cottage from “Snow White and the Seven Dwarfs.”

The eggs are decorated to look like they are made of stone, and have windows and flower boxes. Molded figures of Dopey and Snow White stand outside the cottage.

Beneath them, the rest of the dwarfs emerge from their mine in a train of gold-filled carts.

The Rescuers Down Under

If you’re unfamiliar with “The Rescuers Down Under,” you may not recognize this lizard.

Joanna the Goanna loves eggs, and she’s been gifted one of her own this Easter.

Her egg looks like a real egg (albeit giant) with its light brown, speckled exterior. It’s wrapped in fondant ribbons and has a tag reading “Happy Easter Joanna.”

This open egg has some of the 101 dalmatians sitting in their living room, watching Thunderbolt on TV.

The egg has a red brick exterior, with gold around the edge of the opening.

The base is a Kanine Krunchies box.

This “Toy Story” egg is a scene featuring Mr. and Mrs. Potato Head.

The potatoes are the eggs. Mrs. Potato Head snaps a picture of her husband at an Easter photo op.

Some of the green aliens play with Easter eggs in and around a basket. Mr. Potato Head wears bunny ears.

This impressive egg resembles the balloons of Carl’s house from “Up.”

The egg is decorated with small colorful pieces to make it resemble the balloons. It is balanced on string-like pieces.

At the bottom is a recreation of Carl’s house, including its yard and fence.

Pink and blue flowers are on the fence.

Finally, there is a simple Easter basket display.

What is your favorite Easter egg this year? Let us know in the comments!