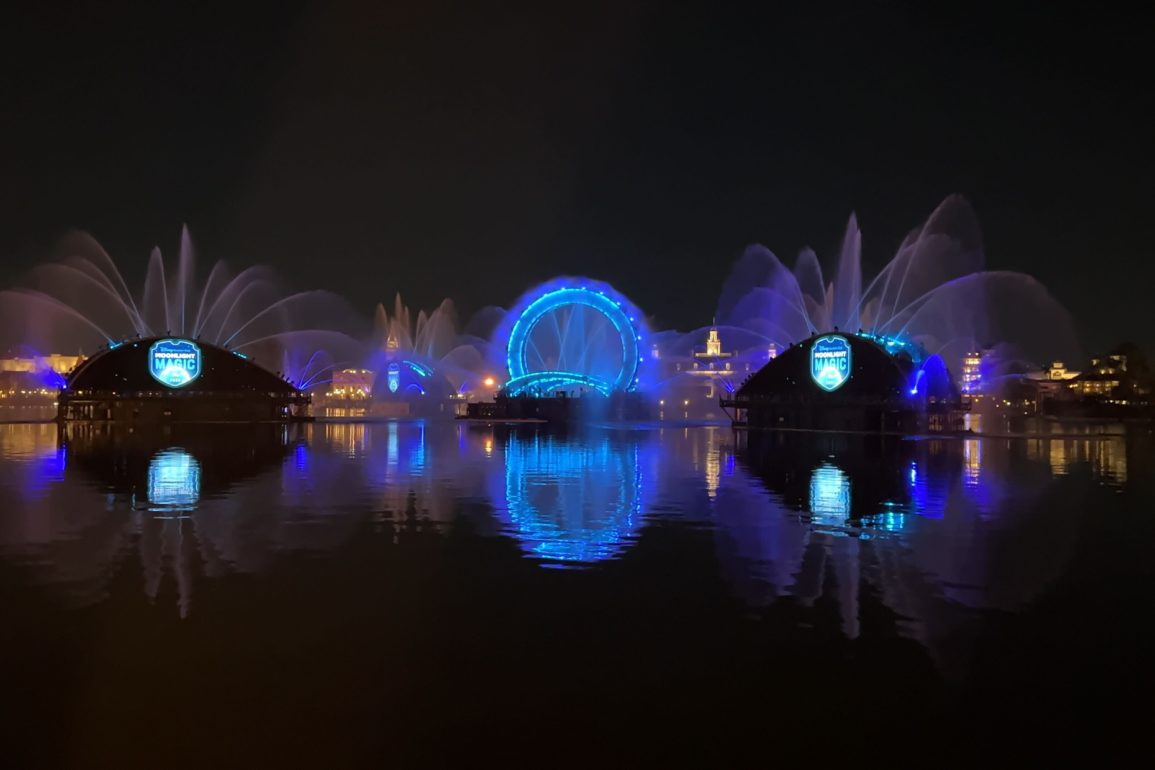 Disney Vacation Club Members are excited that Moonlight Magic events have finally returned! We had the opportunity to attend the first event since the pandemic hit at EPCOT this week.

Guests are given wristbands so Cast Members know they have valid admission for the event.

Moonlight Magic has a new shield logo featuring the Earth at the bottom with a hidden Mickey.

Character sightings were happening intermittently from 10:00 p.m. until 12:30 a.m. Some characters alternated in the same spot every twenty minutes or so.

The characters were all Disney Villains (if you can call Kronk a villain).

There were over a dozen Disney Villains appearing.

Check out all of the rare villain character sightings here.

Journey into Imagination with Figment, Test Track, Soarin’, and Living with the Land were open for the event. In World Showcase, partygoers could ride Frozen Ever After, Gran Fiesta Tour Starring the Three Caballeros, and Remy’s Ratatouille Adventure.

Spaceship Earth was supposed to be open but was closed due to technical difficulties.

World Showcase was closed past the Norway and France Pavilions.

Everything was villain-themed. The DJ wore a sparkling outfit inspired by Maleficent, complete with horns.

They had some villainous zombie makeup on.

The “Harmonious” barges lit up blue for the event.

The “Moonlight Magic” logo was displayed on the screens.

Guests can use one of their snack certificates. One allows you to get popcorn in a complimentary Disney Vacation Club souvenir bucket, but you could use that certificate for another snack instead.

We opted for maple popcorn.

The lines for popcorn quickly got long.

The other snack certificates can be redeemed for ice cream and small snacks at Disney-operated booths of the EPCOT International Flower & Garden Festival.

In addition to snacks, Sunshine Seasons stayed open until 11 p.m. for guests wanting to purchase a more substantial meal.

The only two Disney Vacation Club-exclusive merchandise available during the event were a blue button-up and a yellow Spirit Jersey.

We’ve seen both of these items at Walt Disney World before, and they are available on shopDisney. Check out the button-up.

Check out the Spirit Jersey.

Transportation back to Disney Resort hotels was available late into the evening.

It was great to have this event back, and we loved seeing some rare characters, but it was far from what it once was. There was previously a special fireworks show and decent food options.

As per Disney Vacation Club tradition, Disney remixes and pop music were playing loudly throughout the park. However, there was nobody dancing at the DJ parties because everyone was in line for the popcorn bucket. And it was impossible to get a drink using one of your snack certificates, because you had to stand in the same long line.

The merchandise selection was disappointing, especially considering the new logo would look beautiful on different items.

We will say this is a great event if you love meeting characters.