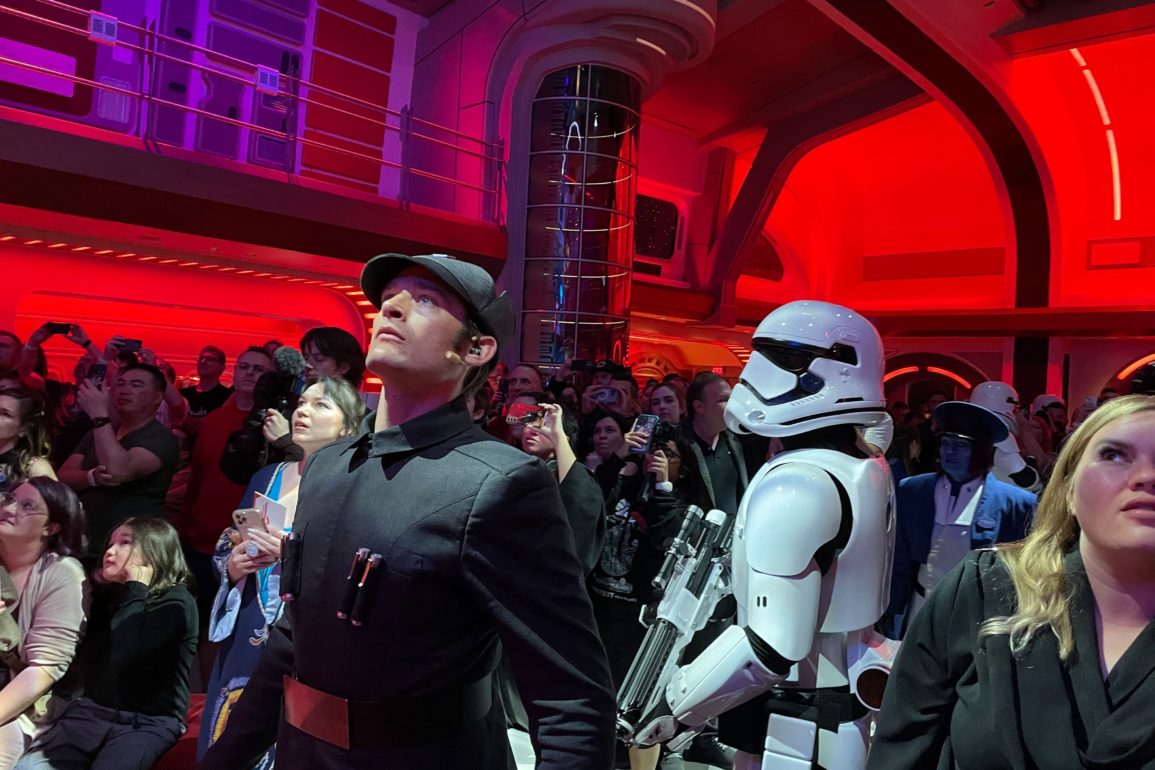 Watch the Thrilling Final Battle for the Fate of the Galaxy on the Star Wars: Galactic Starcruiser

On our second night on the Star Wars: Galactic Starcruiser, the stakes of the story were raised before reaching a thrilling finale. This article will contain major story spoilers for the Starcruiser.

At the end of our meal, it was clear that things were afoot on the Halcyon. Lieutenant Croy and his First Order cronies were losing patience with the crew and passengers. A ship-wide alert told guests to report to their muster stations immediately. We gathered in the Atrium on deck 6.

The Saja helped group guests into their muster stations. Lieutenant Harman Croy yelled at passengers and argued with Captain Riyola Keevan as the alert continued to go off for several minutes.

Croy revealed that some Halcyon passengers had been helping the First Order, calling out a few by name.

A distressed Captain Keevan tried to defend her crew and passengers, but not before Stormtroopers captured Sammie, who was encouraging guests to rebel.

He force-choked Croy and asked Captain Keevan, “Where is she?” When Captain Keevan had no answer, Kylo Ren threatened to drop pieces of the ship atop guests.

Rey arrived right in time, igniting the “real” lightsaber as she entered. Immediately, she became engaged in a battle against Kylo Ren and the Stormtroopers.

Guests cheered on Rey as the battle raged.

Rey seemed to be losing after taking a nasty hit against one of the railings.

Ren took the blue lightsaber from her.

Croy called for “no more surprises,” but it was then that Chewbacca appeared, firing at Kylo Ren.

Kylo Ren used the Force to drag Rey across the balcony.

Rey was then able to reclaim the saber and continue the fight.

The force ghost of Yoda appeared. It was revealed there were more than Resistance secrets onboard: an important Holocron was stored on the Halcyon.

Rey was able to obtain the Holocron and fend off Kylo Ren. She escaped the Atrium. Kylo Ren followed her, but not before ordering Croy to destroy everyone on board.

Captain Keevan and the crew begged Croy not to do what Kylo Ren had ordered.

The tides turned in our favor as one of the Stormtroopers seemed to turn on the others.

He discarded his helmet and revealed himself as Sammie to thunderous applause.

The Halcyon crew then regained control of the ship.

Lieutenant Croy was forced to declare the mission was over, and the Halcyon was clear.

Captain Keevan sent the First Order off the ship.

Rey reappeared with the Holocron to thank everyone.

Power was restored to the Halcyon, and it escaped through Hyperspace.

Everyone said farewell to Rey, Chewbacca, and SK-620.

They departed triumphant and celebration ensued.

Watch our video of the full finale below.

This was spectacular. The tension raised organically throughout the day as we met with Lt. Croy (for this trip, we were First Order sympathizers — we’ll bring full coverage of the Resistance path soon) to help plan and sabotage the ship’s systems. Stormtroopers monitored our meal, and when the alarms went off, it felt like a natural escalation.

The final battle had more than just the main action as the other crew and characters reacted to the situations. It helped add to the chaotic environment, furthering the feeling that the stakes were raised. It was truly a lot of fun.