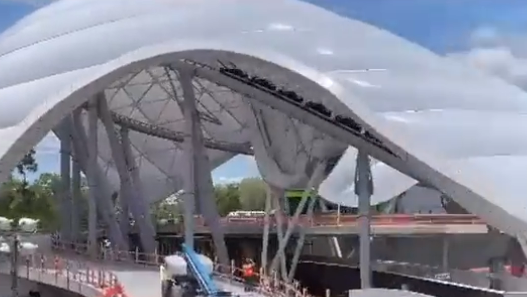 As construction continues on TRON: Lightcycle/Run in Tomorrowland, the coaster was seen doing test runs on the track. Previously, the vehicles have only been seen conducting push-pull testing.

The video was taken by Andrew of DisQuick Sounds today from the Peoplemover. The coaster vehicles can be seen zooming around the track in the short clip. As opposed to the smaller units used for push-pull testing, the higher speed tests conducted today were using trains of Lightcycles.

We will keep you updated on everything TRON Lightcycle/Run-related as it prepares for the yet-to-be-announced opening date.

Next
New Youth ‘The Mandalorian’ Crocs Available at Disneyland Resort