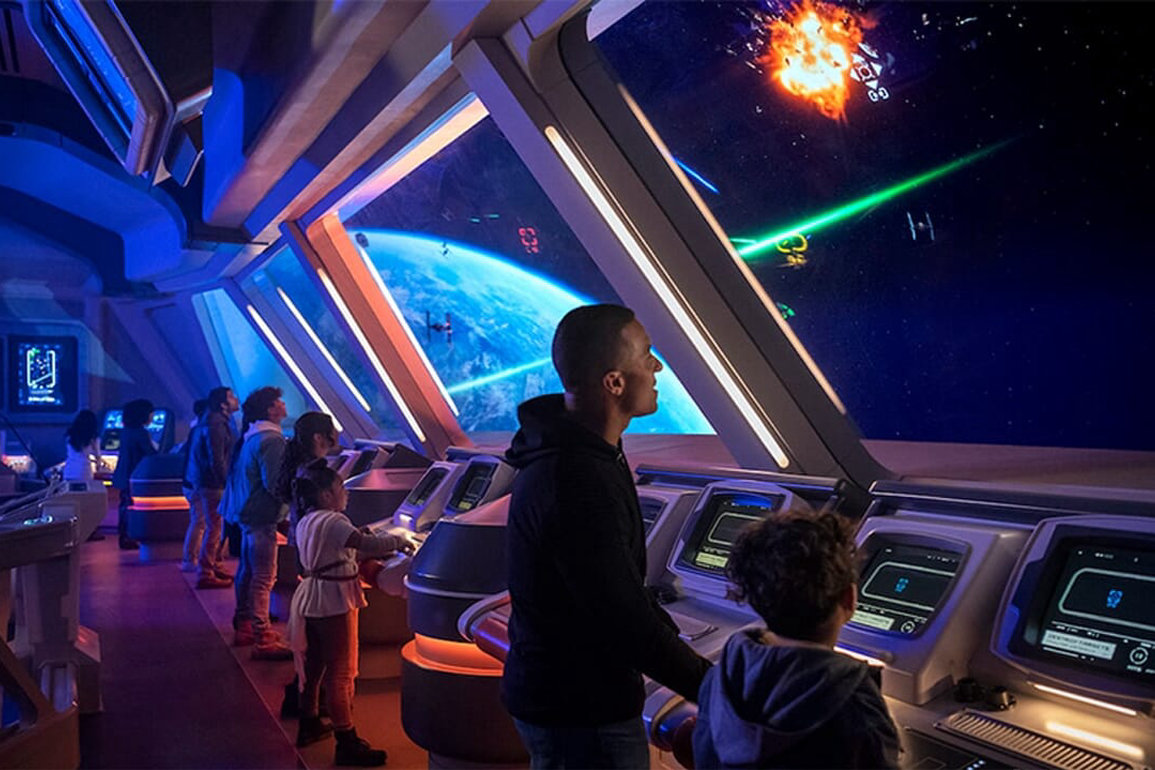 Read the full interview below:

“Before joining the creative crew behind Star Wars: Galactic Starcruiser, Alex Lee worked in the theatrical market, then was recruited by Disney Parks to work on products for East Asian audiences, then did a stint at the Shanghai Disneyland Resort. All of that experience comes together at his current gig: entertainment producer for Galactic Starcruiser at Walt Disney World, an immersive Star Wars-themed “ride” aboard a luxury space liner. There, Lee is a part of the team that helps guests live out their own adventures.

In our conversation about how Starcruiser voyages are evolving as more guests get to experience the attraction, Lee explained that he doesn’t exactly hail from a fanboy background. “After the Shanghai Disneyland Resort opened, I had the opportunity to work for this portfolio and franchise, which is fascinating because I didn’t really have an affinity for it, but it was thrilling that I have been able to do some great things with Star Wars,” Lee told io9, referring to his involvement in developing Disneyland and Disney World land Star Wars: Galaxy’s Edge. He was one of the minds behind Savi’s Workshop, where guests can participate in their own lightsaber-building ceremonies—an experience designed to be filled with emotional story beats.

The team Lee works with, he explained, covers a range of Star Wars fandom. “There’s people who have come to this project who are Star Wars fans but aren’t necessarily recruited because they’re Star Wars fans. We actually find out about it because they’re actually very hesitant to kind of show that. They think it’s going to hinder their progress into the field,” he said. “It’s really interesting to see who is passionate about what, between the cast members who are hardcore Disney and Star Wars fans, and those like me who are neither but are equally dedicated to production experience and creating stories.”

It’s no wonder he was brought in to work on Starcruiser, one of Walt Disney Imagineering’s most ambitious feats yet. It takes a particular set of skills to make a production like this work, including knowing how to create spaces for the story to flow onboard. “I was on the development side of creating the entertainment program as the producer working with the show team to identify what the facility needed to be, what we needed in the space to bring these characters to life in these stories,” he said of the pre-production phase. “And then, working with the operations team to develop strategies that would allow for all of that to continue to run with integrity, and continue to have its maiden voyage again and again and again.”

If you’ve seen any of the highly detailed vlogs or social media videos which highlight the array of guest experiences on board the Halcyon, you get a resounding “how do we come back?” more often than a “one-and-done” reaction—that steep cost notwithstanding, of course. That’s something that could test the maiden voyage story approach, if enough fans are able to find a way to fund another adventure, and Lee’s already anticipating how that could potentially change things for the Halcyon. “I am there on site and ensuring that we’re still telling the stories that we want to tell and that people are still enjoying the stories now that there’s a level of exposure and spoilers to it—and seeing what our opportunity is for adaptation and how we can continue to drive that,” he said.

Galactic Starcruiser is famously designed to be an experience within the world of Star Wars, something that’s way more than just a themed hotel. Just take a gander at any of those reaction videos or posts and you’ll notice a sort of enchantment over the relationships guests build with the characters they spend 48 hours with. “What’s really fascinating is I watched these guests come on board. They set off of the the launch pod for the first time, and there’s something magical that happens,” Lee said. “I call it sanctioned playtime where all of a sudden all inhibitions are just instantly released and people don’t even question it. They don’t even question the fact that they are now able to pick up a role or how to play, and they find themselves observing and playing and realizing the opportunity that they have. I think that’s something just that just subconsciously happens.”

And perhaps a surprising result? They want to come back and continue the story, which could prove tricky if they just come back to a Groundhog Day-ish rehash of the same events they’ve already played. “We’re still early on in the fan affinity level of who is coming in,” Lee said. “But we’re actually seeing people who are playing so hard that that’s actually the larger challenge and opportunity that we have from a storytelling perspective, to kind of rein people into this specific Star Wars story as opposed to everything else that’s happening in the galaxy. So I think that’s a really interesting foil that again speaks to the level of time and energy and investment that everyone is putting in.” Turns out that guests who arrive already inspired by the worlds within the Star Wars galaxy are also inspiring those worlds, too.

And this isn’t the first time. I brought up to Lee how there are legions of fans who will show up to Galaxy’s Edge on Life Day—the Wookiee-celebrated festivity from the Star Wars Holiday Special—dressed in ceremonial red robes like Chewbacca and his family, not just to cosplay but to take part in a special gathering with friends along with makeshift glowing orbs to ring in the season. And clearly, Imagineering has been aware of this tradition. “In terms of the opportunities that we have for stories and events within Star Wars, it’s definitely something that has been discussed and something that the franchise is very interested in,” Lee said.

Just last year, Disney Parks softly integrated Life Day-themed foods and licensed orbs among its experience offerings. So when it comes in-world events, I asked if something like Life Day could its way into seasonal stories aboard the Starcruiser. Lee revealed to us, “I think we’re going to start to see things happening organically as we begin to get closer to Life Day, and people playing hard into that, that we’re going to have the opportunity and our performers are going to have the opportunity to react to and kind of pick up on more and inject all of that into their storytelling. And then, of course, looking at opportunities down the line for formal events and what of those potential possibilities might come into play.” (Formal events? Please give us spooky excursions aboard a haunted ship with Sith Force ghosts we have to bust, er—guide away from the Dark Side! Too much? OK, how about maybe a storyline with some more villains during Halloween?)

Before we get too excited, it’s important to note that the Halcyon is still within its first few weeks of operation. There’s still so much that’s been done and needs to be received by a wider array of guests. Lee brought it back to the timelessness of the lightsaber: “[Even though I’m not a] deep Star Wars fan, I know and understand what it means for people who are highly tied to this franchise to come in to experiences that we’ve created. Seeing the reactions to people being able to live their dream of holding a lightsaber and feeling the Force and having a very tangible and visceral reaction to holding those lightsabers and experiencing those beams means a lot to me—especially coming off of Savi’s Workshop from Star Wars: Galaxy’s Edge. I have a particular affinity for being so closely attached and really reveling in it. And that’s why we continue to do this work.”

While we remain excited for the future of what could happen as Galactic Starcruiser continues its voyages, reactions to the story on the Halycon are proving to be a big win for a new era of participatory entertainment thanks to imagineers like Lee. Stay tuned for part two of our conversation where we talk about performers, including everyone’s favorite star of the show, Twi’lek singer Gaya—and that day dashing Resistance hero Oscar Isaac visited the attraction.”

Which “Star Wars” holidays would you like to experience on Star Wars: Galactic Starcruiser?

Read our full review of our experience aboard the Star Wars: Galactic Starcruiser here.

Manatee Rehabilitated at The Seas with Nemo & Friends in EPCOT Returned to Natural HabitatMarch 1, 2022
REVIEW: Orange Pecan & Banana Bread Chocolate Chip Cookies Return to Gideon's Bakehouse in Disne...July 1, 2022
WATCH PARKSCENTER — Breaking Down Everything Happening for Halloween at the Parks and the Latest New...August 7, 2022