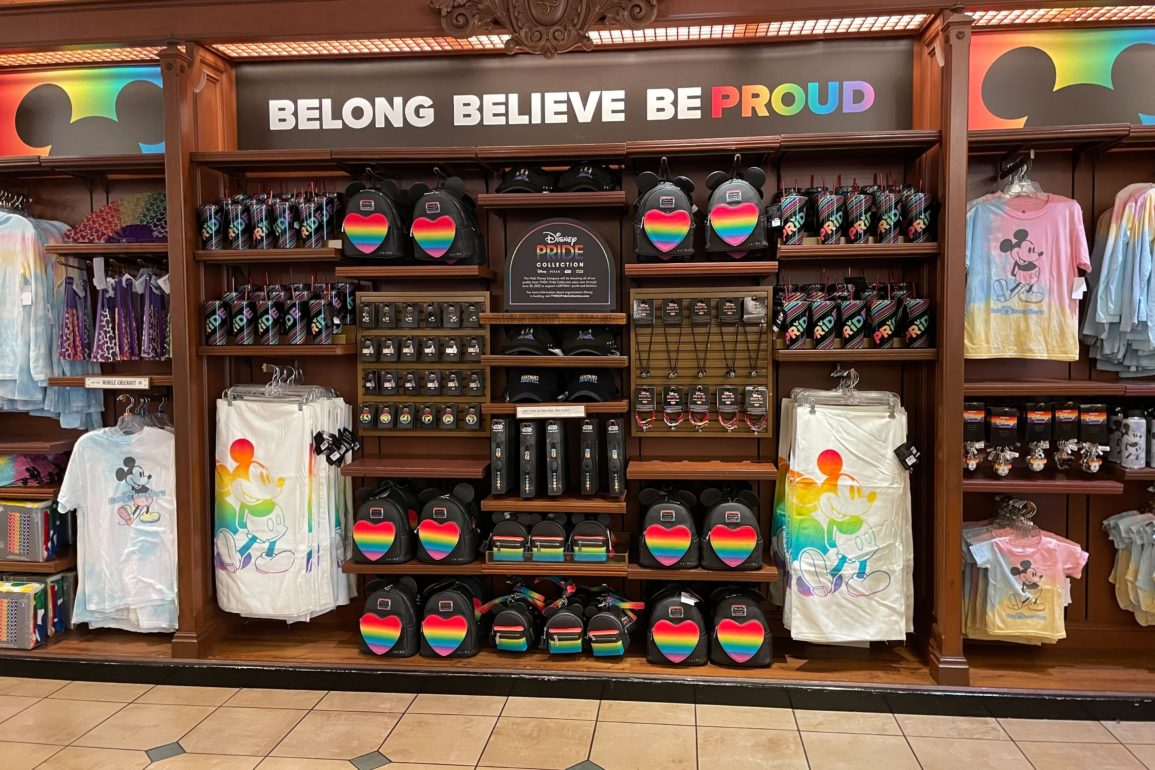 Following the controversy surrounding the “Don’t Say Gay” bill in Florida, Disney’s 2022 pride collection is now available at Walt Disney World. This year’s collection is the first to be branded the Disney Pride Collection, instead of the Rainbow Disney Collection. The collection includes “Star Wars” and Marvel designs, and was designed by members of the LGBTQIA+ community and allies.

Unlike previous years, 100% of profits from the collection will go to LGBTQIA+ organizations from now through June 30, 2022. Previously, only a small percentage of profits went to LGBTQIA+ communities.

We found items from the collection at the Emporium and Tomorrowland Light & Power Co. in Magic Kingdom, as well as in Creations Shop and the Imagination Pavilion at EPCOT.

This black MagicBand has a rainbow version of the “Star Wars” logo on one end.

The other end features a rainbow of various “Star Wars” symbols, including the Jedi, Rebellion, and Empire logos.

This pin features the shape of Cinderella Castle on one end. The background is made of a rainbow and the white silhouettes of Mickey, Goofy, and Minnie march in the foreground.

We found the two Mickey pride pins a couple of weeks ago.

This black ball cap has a rainbow ombre version of the Marvel logo on the front.

Rainbow Marvel symbols are on the back, including symbols representing Spider-Man, X-Men, Captain Marvel, the Hulk, Ms. Marvel, and Black Panther.

This ball cap is also black.

It has a rainbow ombre on the front made out of the Rebellion logo and an overlapping “Star Wars” logo.

“Pride” is printed on the side. The “d” is a rainbow version of the classic Disney “D.”

The “Star Wars” logo is also on the back in a rainbow stripe.

This simple necklace has a black cord with a pendant shaped like Mickey’s head.

Mickey’s face is a rainbow ombre.

The bracelet is mainly a red and black cord, with a cluster of colorful cords on one side.

The charms include the same Mickey-shaped rainbow pendant from the necklace and a rectangle reading “Love” in a rainbow.

This white beach towel features several silhouettes of Mickey in a rainbow.

The full image of Mickey is at the right end.

This tumbler was first released in April.

This button-up is white with an all-over pattern of colorful Marvel symbols.

In addition to some of the symbols featured on the ball cap, we also spotted logos representing Iron Man, Captain America, Black Widow, Hawkeye, Thor, and Doctor Strange.

This crop top is white with the Marvel logo printed on a rainbow stripe.

Below the Marvel logo are the same symbols from the ball cap.

This matching pullover hoodie is black with the Marvel logo on the chest.

The sleeves are printed with the same symbols of superheroes in an ombre rainbow.

This tee is black with the rainbow Marvel logo on the left breast.

The back reads “power, heroic, courage, strong, protect, bold,” with the “o”s of each word replaced with a superhero symbol.

The letters and symbols are printed in a rainbow ombre.

This hoodie is a dark grey with the Luxo lamp and ball at the center.

A circle reads “Pixar Animation Studios” around the two icons and everything is pictured in rainbow.

This white ringer tee has a blee neckline and blue at the ends of the sleeves.

The silhouette of one of the “Toy Story” aliens is at the center of a “Pixar Animation” ring, all in rainbow.

This tee is blue, white, and black tie-dye.

A rainbow version of the Pixar logo is on the front, with silhouettes of these Pixar characters: Mr. Incredible, Nemo, Woody, Mike Wazowski, Sadness, and Flick.

These heather grey shorts have the Pixar ball and logo in rainbow on one leg.

In Bay View Gifts at Disney’s Contemporary Resort, we found this pin set matching the other Marvel merchandise.

The backing card lists “power, heroic, courage, strong, protect, bold” in a rainbow ombre. The pins are the “o” superhero symbols of each word.

There are six pins in the set.