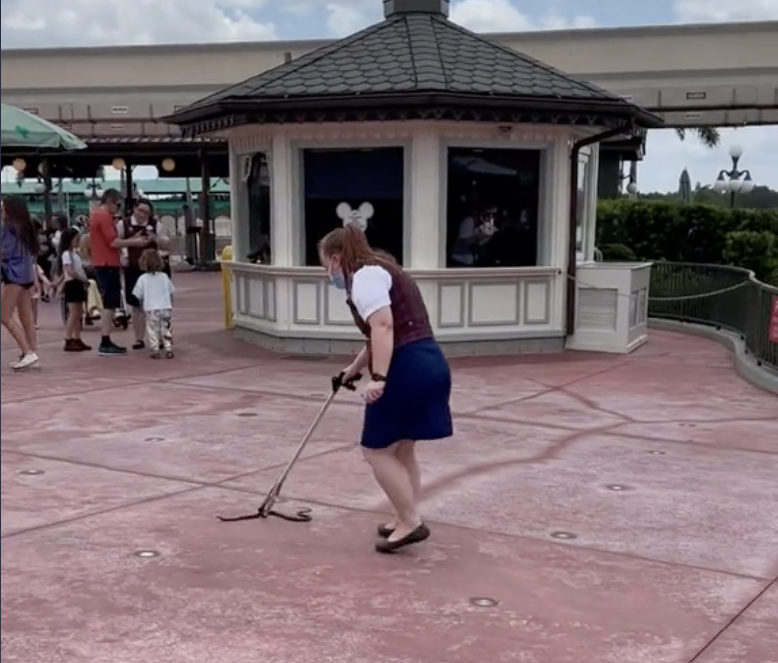 In a TikTok video shared by user @disney_with_bren, a guest services Cast Member attempts to wrangle a snake outside the Magic Kingdom entrance.

The calm Cast Member is using a trash picker to move the snake, though it often slithers away from her. The Cast Member appears to just be directing the snake towards the bushes, and not intending to fully pick it up. Another guest services Cast Member can be seen directing guests away from the snake.

Bren wrote in their caption, “He didn’t make a res” with a shrug emoji. The audio in the background is from “The Office,” with Michael Scott shouting, “Everybody stay calm!”

The snake is thin and black with no visible markings. It may be a Black Racer, a non-venomous snake common to Central Florida. According to AAAnimal Control, a professional wildlife control company in Orlando, Black Racers are fast-moving, active during the day, and will “thrash about and strike frequently” when captured.

Nobody in the video — which was posted on April 29 — appears injured. According to Bren, the Cast Members got the snake back into the grass and out of the way of guests.

The Cast Member in the video, Ashley Nicole Wagner, actually commented on it today, May 10, stating her calm demeanor was because “I just don’t hate snakes.”