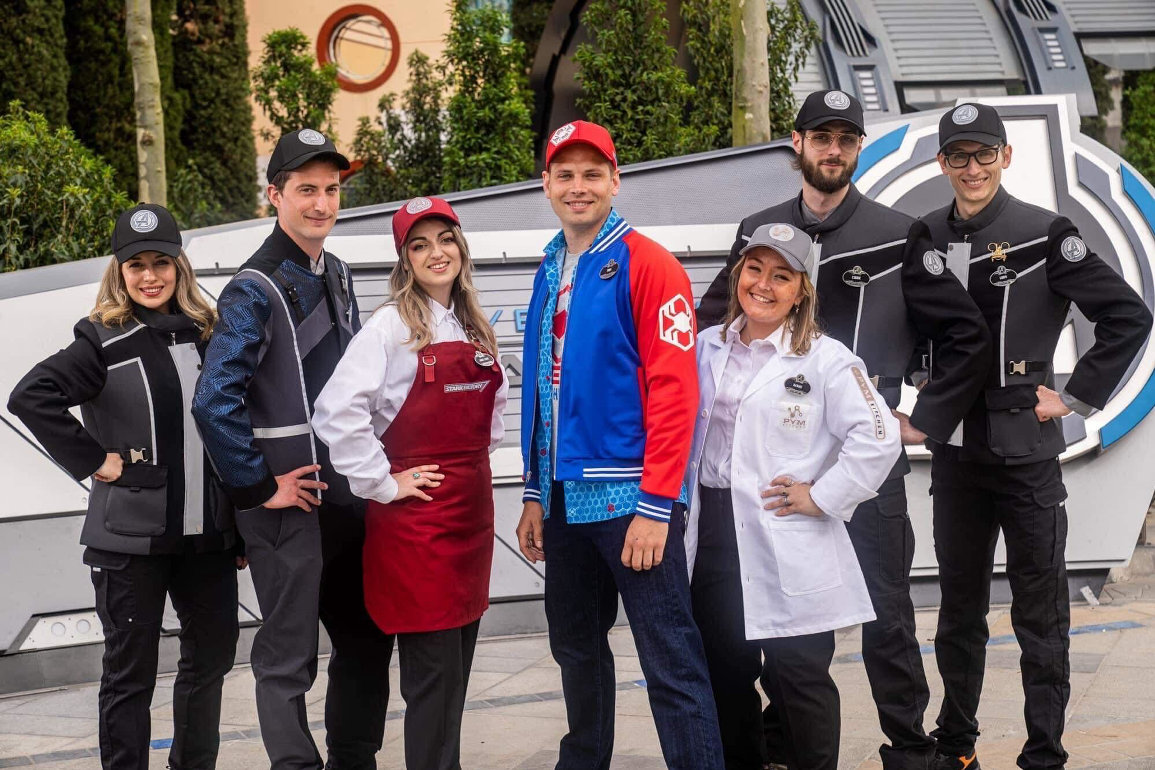 The costumes are roughly the same as those found in the Avengers Campus in Disneyland, though there are a few key differences. The WEB Slingers: A Spider-Man Adventure outfit worn by the Cast Member in the center is the same as California’s outfit except for the hat being red instead of blue. To his right, the Pym Test Kitchen costume features a white coat printed with the restaurant logos and a grey hat, rather than a plain white coat with a pocket protector and a black hat as found in California. The Cast Member is also not wearing the necktie as California was issued, though in practice, the Cast Members in California don’t always wear the tie either. To the left of the WEB Slingers Cast Member is the costume for Stark Factory, a quick-service restaurant not found in California’s iteration. It does seem to be the same apron-and-white-shirt costume as found at California-exclusive Shawarma Palace, though with a Stark Industries red apron instead of the Shawarma Palace yellow apron, and a ball cap instead of a garrison cap.

The general area Cast Member costume, as seen by the four Cast Members on the edges in the top image and the two Cast Members above, showcases the biggest departure from California’s designs. With button flaps and other decorative elements made of flash-reflective material, these vests are sure to stand out for guest photos. The long-sleeved shirt comes in tones of grey and black, rather than California’s dark blue or flat black shirts. The hat remains black as in California, but with the more standardized Avengers Campus logo patch rather than the Avengers logo proper.

The Cast Member in the center wears a costume for an unidentified location. It could be for the attraction Cast Members in Avengers Assemble: Flight Force.

What do you think of the Avengers Campus Cast Member costumes coming to Disneyland Paris? Let us know in the comments below.