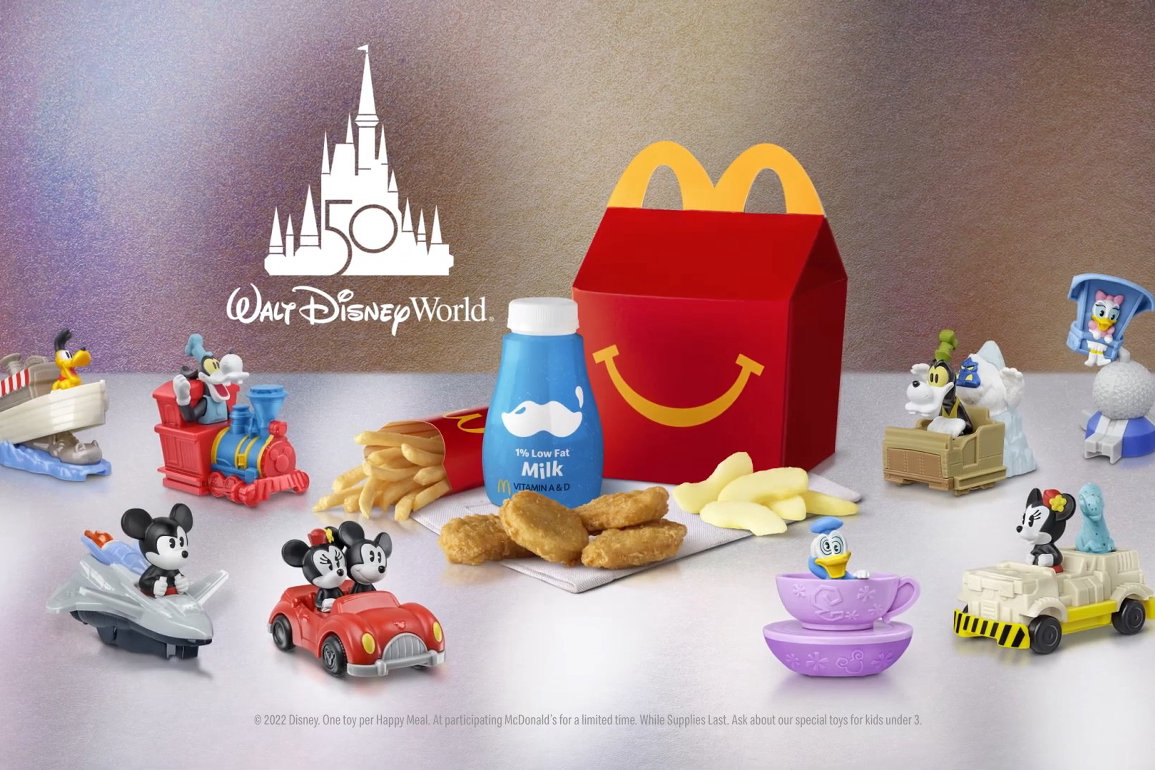 In November, 2020, McDonald’s began releasing a line of Happy Meal toys to celebrate the opening of Mickey & Minnie’s Runaway Railway at Disney’s Hollywood Studios. Just a week after the toys began their release, they were pulled from McDonald’s locations nationwide due to an error in the QR code game pieces found inside the toy packaging and on the Happy Meal boxes. McDonald’s promised to bring the toys back without game pieces as soon as a few days later, but many locations nationwide never made the toys available again for one reason or another.

Now, nearly 18 months later, the same toy line is finally being reissued as a Walt Disney World 50th anniversary line of attraction vehicles. This time around, the line consists of only eight toys where the initial release had 10 toys. In the reissue, the available toys include Mickey and Minnie in Mickey’s car from Mickey & Minnie’s Runaway Railway, Goofy in the train from Mickey & Minnie’s Runaway Railway, Mickey in a space ship from Mission: SPACE, Pluto on a Jungle Cruise boat, Donald in a Mad Tea Party teacup, Minnie on Dinosaur, Goofy on Expedition Everest, and Daisy flying over Spaceship Earth on Soarin’.

This time around, some of the toys have a special spot of gold in honor of the 50th anniversary.

The original release had all of these toys, as well as Mickey on Tower of Terror and Minnie on Pirates of the Caribbean.

We headed out to McDonald’s this afternoon to grab a Happy Meal and take a look at the new box art.

The box features all eight toys lined up, as all the toys connect to form one long parade train.

Beyond the toys and the 50th anniversary logo, the box only has some sparkles scattered around a white background.

The sides of the box mention the RMHC donations from each happy meal.

The bag for each toy is the same as it was for the initial release. While the box and commercial tout the 50th anniversary, the bag still says “Walt Disney World Celebrates Mickey & Minnie’s Runaway Railway!”

The toy itself is also unchanged, with no special imprint or decal to denote the 50th anniversary promotion.

McDonald’s has also released a commercial promoting the toy line reissue, which is the same animation from the commercial the last time these were released but with new narration and end card. You can see the commercial below:

Will you be adding these toys to your collection now that they’re back? Let us know in the comments below.

Next
Guest Tries to Bring Meth Into EPCOT