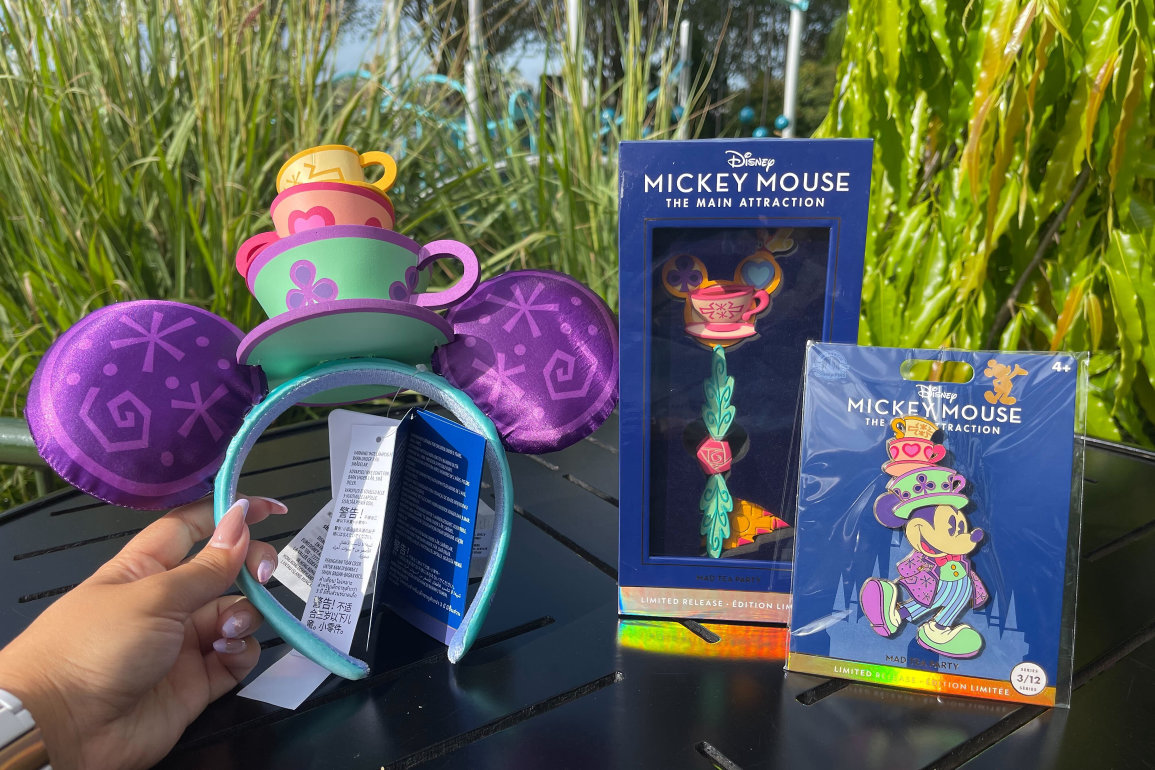 It must be our unbirthday, because the next collection of merchandise from the Mickey Mouse: The Main Attraction has spun into Walt Disney World, and it’s all inspired by the Mad Tea Party!

The ear headband features a stack of teacups styled after the ride vehicles of this iconic attraction, which has been operating at the Magic Kingdom since its opening day.

The Walt Disney World 50th anniversary logo appears embroidered in gold on one of the ears.

The other ear features a whimsical pattern in light purple on a darker purple background.

The same pattern appears on the reverse side of both ears.

So as not to weigh too much on wearers’ heads, the cups are made of a soft foamy material.

The Mad Tea Party logo appears in purple on the sky blue headband.

The limited release key features a teacup with a light blue heart and purple clover above it on the bow, with green leaves and a rose straight out of Wonderland on the shaft, and a Cinderella Castle in the same style on the bit in orange and red.

The reverse side of the package features a short paragraph about the Mad Tea Party.

Down the rabbit hole, make your way to the Mad Tea Party attraction. Inspired by a sequence from Disney’s 1951 animated film Alice in Wonderland, the Fantasyland attraction opened in 1971 in the Magic Kingdom Park at the Walt Disney World Resort. It features giant teacups that allow guests to whirl and twirl at their own speed.

The limited release pin features Mickey Mouse dressed for a tea party in a purple patterned coat and blue striped pants, and a light green shirt with matching shoes. But the centerpiece of his look is his hat, complete with three teacups!

A plush, typically part of the releases in this line, was not available as of the writing of this article, with a Cast Member telling us that they’re expected to arrive at Walt Disney World sometime in September.

We found all of these items at Creations Shop in EPCOT.

For more from the series, check out the previous releases themed to Space Mountain and Pirates of the Caribbean!