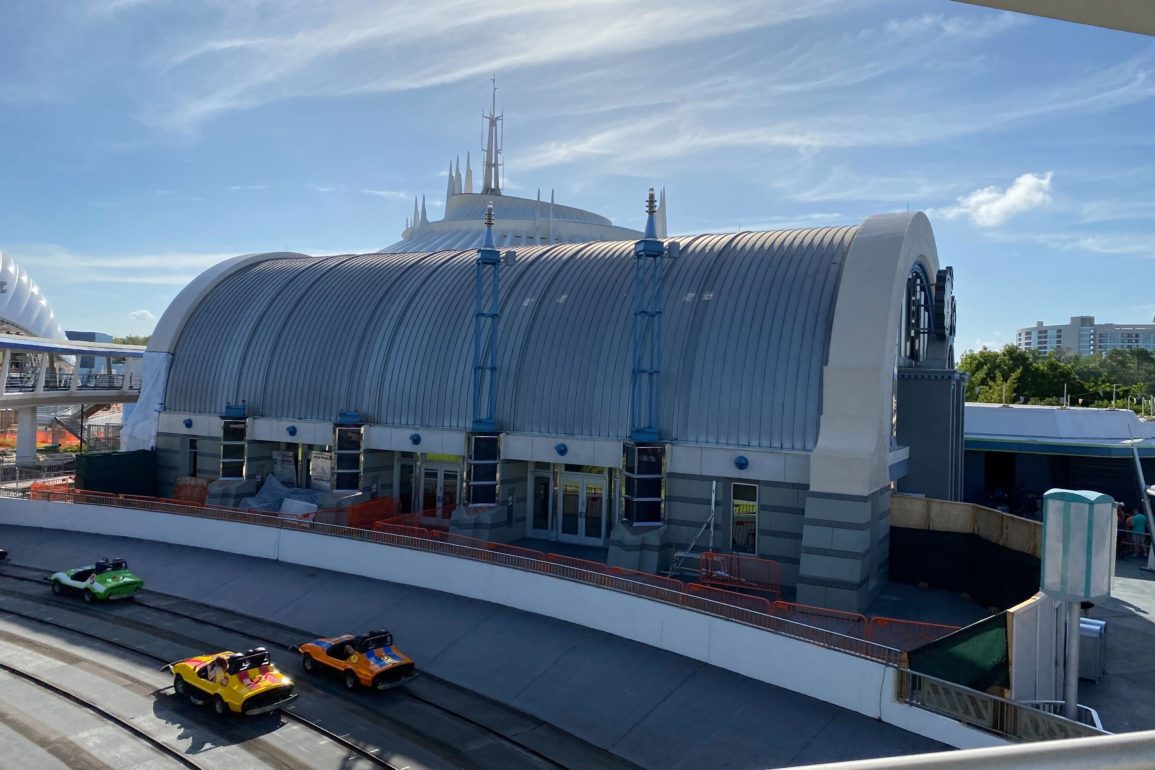 While construction continues on TRON Lightcycle / Run, construction has also begun on the side of Tomorrowland Light & Power Co., which guests will walk past to reach the attraction. Let’s take a look at progress on both the coaster and the store at Magic Kingdom.

The canopy was completely installed a week ago.

White paneling is being added to the edge of the canopy.

On the ground near Tomorrowland Speedway, more walls have been constructed.

Crew members were working on a wood wall when we rode by on the PeopleMover.

A curved wall encased in concrete leads right up to the main raised walkway.

Smaller wave-shaped walls stick out of the walkway.

According to concept art, there will be a second walkway beneath the first — likely a shortcut to Storybook Circus.

Right now, work is focused on walls. A second walkway has not been paved.

Permanent railings have yet to be installed on the raised walkway, but most of the orange netting and extraneous construction materials have been removed.

The planter at the front of the walkway will hold a TRON Lightcycle / Run sign.

Next to the walkway is the tunnel for the Walt Disney World Railroad.

The other side of the tunnel has a rounded roof, but this side remains open.

The coaster will launch from below the entrance. We have occasionally seen ride vehicles testing along the launch track.

While the main canopy is completed, the entrance canopy has yet to be installed.

Crew members in scissor lifts and cherry pickers have been working on the framework for the smaller entrance canopy.

Meanwhile, two towers have been removed from the side of Tomorrowland Light & Power Co.

White tarps surround the corner of the building.

The first tower was removed a few days ago, and the second tower is now gone.

The doors and windows are blocked by black fabric inside.

There are tarps and Energy Shield panels around the doors.

Two towers remain, but we expect they will be removed, too.

It’s possible the towers are being permanently removed, or they are just being refurbished.

Construction walls block the walkway, but the store remains open.

The towers are still visible in the original concept art seen below.

However, concept art is subject to change.

On the other side of the construction site, the lockers building is still being finished.

There are also still some gaps in the white paneling on the edge of the canopy.

There is no announced opening time frame for TRON Lightcycle / Run at Magic Kingdom.