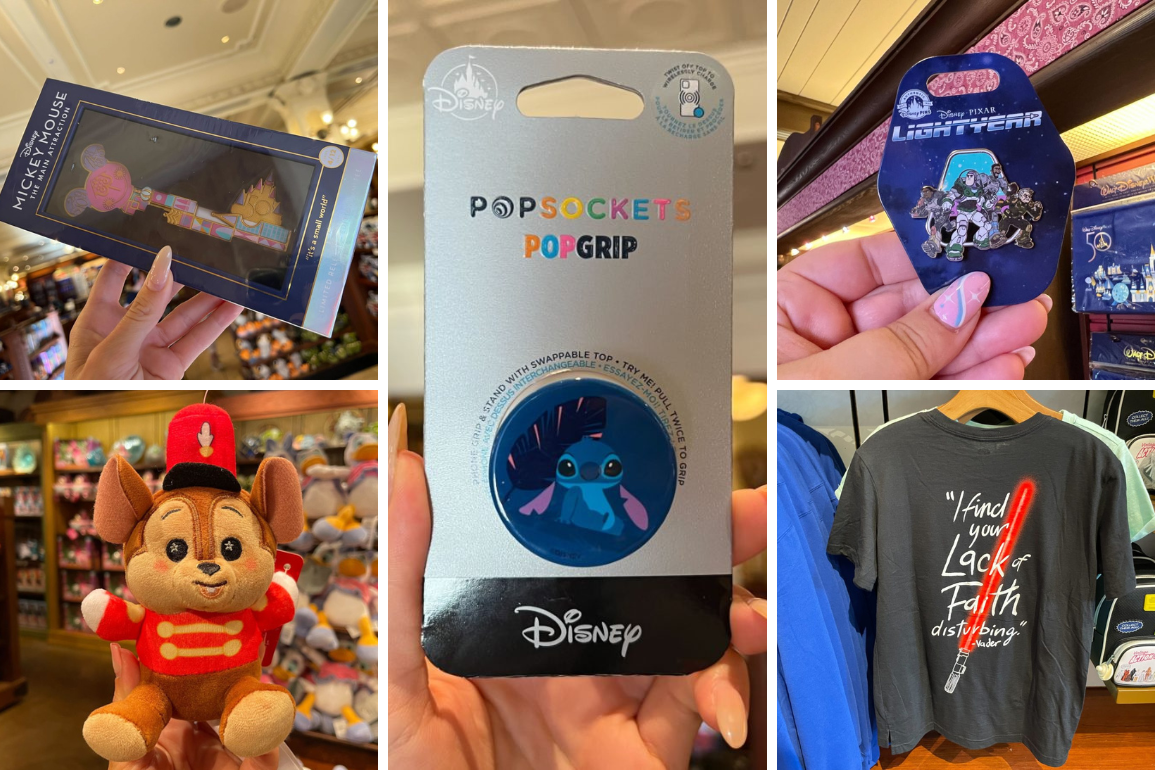 This collectible “it’s a small world” key is part of the Mickey Mouse: The Main attraction collection has arrived.

It comes in a blue box with a transparent display window.

The key has the classic “it’s a small world” clock face in pink on the end. It has purple Mickey ears featuring the clock numbers.

The stem of the key is covered in colorful boxes resembling the buildings of the ride’s iconic façade.

The teeth of the key are shaped like Cinderella Castle. It’s gold, with purple and pink turrets, and a “50” debossed in the center.

We found the key in the Emporium at Magic Kingdom.

It has a wood finish, with Stitch pictured outside a beach hut on one side.

It has a brown strap for easy carrying around your summer parties.

Stitch is surfing on the other side of the box. This and all of the Stitch merch below was also in the Emporium.

This pullover hoodie is tie-dye blue and white.

It has a large pocket on the front.

On the left breast is a small image of Stitch playing guitar in front of an ocean wave. The sunset is represented in orange and yellow lines in the background.

The same image is printed larger on the back of the hoodie.

This youth hoodie has the same design.

This pullover has a darker blue tie-dye.

The same image of Stitch is on the front and back, this time outlined in white instead of blue.

The rest of this Stitch merch was in Boutiki at Disney’s Polynesian Village Resort.

This set includes four acrylic glasses. Stitch is embossed on each one, but not colored in, so they are fully transparent.

These camouflage Crocs are inspired by “The Mandalorian.”

The camo pattern is green, black, and grey.

Attached Jibbitz charms include a Mandalorian helmet, the Mythosaur skull symbol, the Mudhorn skull symbol, and the “Star Wars” logo.

The heel straps are black, while the bottoms of the shoes are grey.

These were also in the Emporium.

This adorable Meilin red panda plush was in the Emporium.

Mei is mostly an orange color with dark red and white sections.

She has brown toes.

Her tail is striped red and orange.

Also in the Emporium was this Mei-shaped nightlight.

It’s Mei in her red panda form again, but she’s made of smooth plastic instead of plush materials.

The nightlight switch and battery compartment are on the bottom.

This bottle is a transparent blue, with a silver metal piece at the top and a black cap.

Mickey and his friends, in their EARidescent outfits, are all over the bottle.

There are also fireworks and stars.

A blue straw pops out of the lid.

This is a special edition figure of Mighty Thor, a.k.a. Jane Foster, as she appears in “Thor: Love and Thunder.”

She has posable limbs.

She’s wearing a silver helmet and has blonde hair.

This and the “Thor” bottle below were in the Emporium.

The bottle is blue, with a Nordic symbol in red, orange, and yellow on one side.

Thor, Mighty Thor, and Mjölnir are pictured within the symbol.

“Might” is in yellow and purple with lightning around it on the other side.

The cap twists off.

These socks are heather grey.

He’s pictured in red, black, blue, and grey. These socks and the pair below were in the Emporium.

These socks are black with bright green at the toes, heels, and ankles.

It has light green stripes down the ankle. “XL-15” is in orange.

This pen is shaped like Buzz, in his classic “Toy Story” spacesuit.

He stands with his hands on his hips.

The dome of his helmet is not up over his head.

He has a pen cap instead of feet. This was also in the Emporium.

Over at Disney’s Animal Kingdom, we found this “Lightyear” bottle in Riverside Depot.

It’s a black metal bottle, with Buzz pictured in teal on one side. A spaceship blasts off behind him.

“The Last Space Ranger” is on the other side.

It has a twist-off cap.

The design of the bottle glows in the dark.

We found the rest of this “Lightyear” merch at Island Mercantile in Disney’s Animal Kingdom.

This tee is pink and features Buzz, Hawthorne, and Sox.

This tee is dark grey and features Lightyear and Zurg on the front.

This is a posable figure of “Zyclops.”

It doesn’t light up or make noise.

This heather grey tee says “Property of Star Command” down the front.

The words cross over a black pocket.

A ship — The Armadillo — is featured on the back.

It resembles a diagram or blueprint, with notes to the side.

One of the notes reads “Communications system transmissions network critical to relay data from ground missions back to base.” Another points out the “Zap Shield,” a “protective covering engineered to navigate and zap large flying insects.”

At the bottom is the Star Command logo.

This ball cap is inspired by Buzz’s classic green, purple, and white spacesuit from the “Toy Story” films.

His wings stick out of the sides.

The front resembles his chest plate, with a Space Ranger patch.

The adjustable velcro strap on the back is green and purple.

We found this in the Darkroom at Disney’s Hollywood Studios.

This pin features Buzz and his friends from “Lightyear.” It was in Frontier Trading Post.

We found this Minnie Mouse ball cap at Star Traders in Magic Kingdom.

Black Minnie ears and a polka dot bow sit on the top.

The bow is red with white polka dots.

The main part of the hat is white. Minnie’s autograph is to the side.

The brim is also red with white polka dots.

It has an adjustable black snap strap on the back.

This magnet is shaped like a Mickey head. It’s black and says “One Disney family.”

“Disney” is in rainbow lettering for Pride Month. This was in Tomorrowland Light & Power Co.

In Fantasyland, we found this purple youth tee featuring Ariel, Rapunzel, and Tiana in a group hug.

It says “BFF Kinda Thing” in white letters. Flowers, hearts, and a castle are in the background.

This was in Sir Mickey’s.

An Alice doll is now available in plastic-free packaging. The doll is in Alice’s classic blue dress with a white pinafore and black hairbow.

She also includes a blue hairbrush.

If you’re traveling this Fourth of July, use this backpack featuring Mickey Mouse on the front pocket.

Behind Mickey are red, white, and blue stars.

The rest of the backpack is plain blue.

This was in Curtain Call Collectibles at Magic Kingdom.

This is a “High-Tech Heroes” themed “Big Hero 6” pin set.

There are twelve pins in the collection. One box includes two randomly selected pins.

Each pin features one of the Big Hero 6 characters in their superhero suit or their regular clothes.

He’s the open plush of the Dumbo the Flying Elephant Wishables series.

He is wearing his red ringmaster uniform.

Timothy was in Discovery Trading Company at Disney’s Animal Kingdom.

Put your favorite plants in this new flower pot for the EPCOT International Flower & Garden Festival.

The inside of the pot is blue.

The outside is white with two blue stripes.

Though this pot is for the EPCOT International Flower & Garden Festival, we found it at Discovery Trading Company.

This bomber-style jacket looks like it has been stamped with the outline of Cinderella Castle and splattered with colorful paint.

The retro “D” logo is in black on the left breast.

It’s made of a satin material.

“Walt Disney World” and the retro logo are on the back.

Also in The Majestic was this red Darth Vader tee.

Vader’s helmet is in black, with his name below him and down the side.

It also reads “My galaxy, my rules.”

It’s black, with Vader looming from the front of the shirt.

“Darth Vader” is in red lettering on the bottom corner.

“I find your lack of faith disturbing” is on the back.

The famous quote is over an image of Vader’s red lightsaber.

We found this grey Marvel Comics tee in World of Disney.

It features the Hulk, Spider-Man, and Captain America.

This is inspired by the yet to be released Snow White Disney Designer Collection doll.

She wears a yellow dress, with a red cape and poofy red collar.

Information about the designer, Steve Thompson, is on the backing card.

The Annual Passholder phone cases we previously discovered are now available for customization in MaDe kiosks.

This case is red, with Mickey’s face peeking up from the bottom. Most of the cases read “Walt Disney World Annual Passholder.”

This is the same design as the case above, but with a solid yellow background.

This case is yellow, with a wavy background pattern. Mickey holds onto red and white stripes.

This one is just the background of the above case, but with a small Mickey logo and “annual passholder” at the bottom.

This has a solid yellow background with a Monorail moving along red and white stripes.