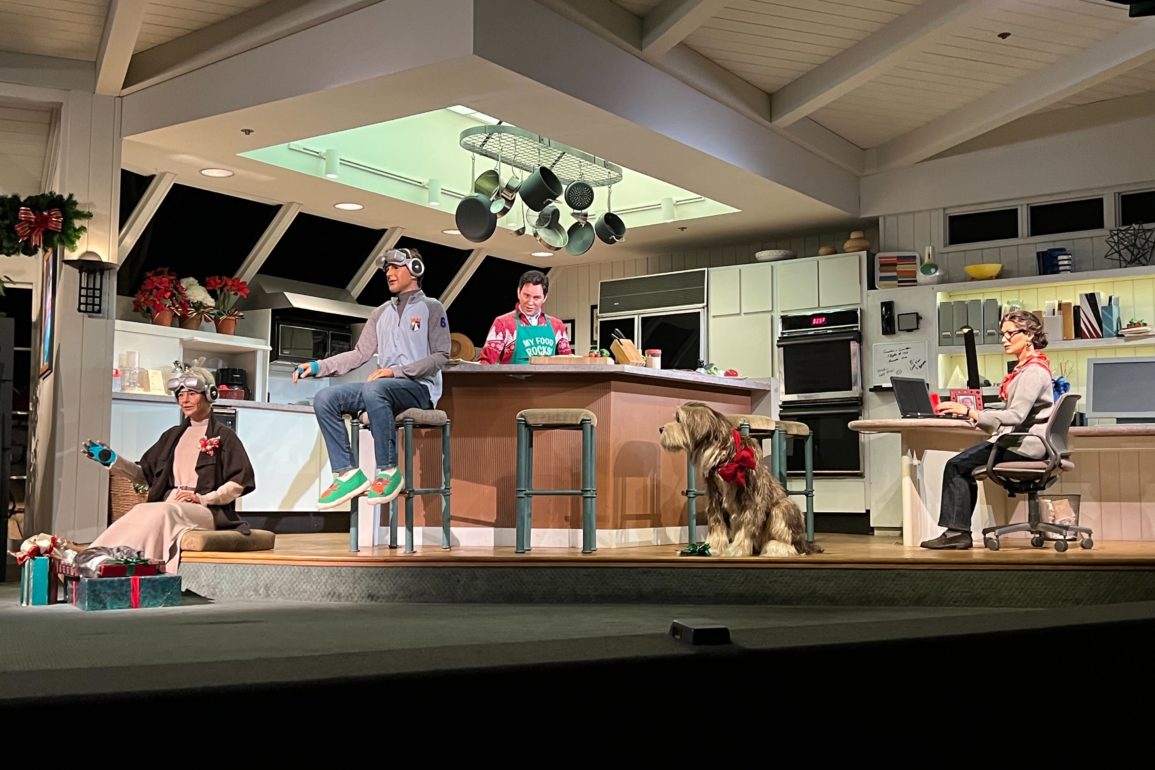 The Carousel of Progress family has all-new outfits in the final scene of the attraction at Magic Kingdom.

In this scene, the family is celebrating Christmas surrounded by relatively modern to futuristic technology.

He’s holding the same patterned tie gift and his pipe from before. His grey hair has been updated.

The daughter, Patricia, has a more modern hairstyle. She has bangs and the rest of her hair is pulled into a messy ponytail. Instead of a pink sweater over a yellow shirt, she’s wearing a grey “Progress Tech” hoodie, a reference to Progress City.

Patricia is also wearing new pajama pants and slippers featuring a reindeer with its tongue sticking out — a reference to floppy-tongued reindeer originally featured in the parks in the 1960s. The boots in her lap are now brown and resemble hiking or snowboarding boots more than her old white skiing boots.

Compare grandpa and Patricia to their old looks below.

Over by the TV, grandma is wearing a new pink sweater dress with a black cardigan. She has the same holiday brooch on her lapel. She also has new hair, more of a blonde bob than her old style. The cat is still sleeping soundly in front of her.

The son, James, has traded in his striped shirt for a grey and blue pullover. The logo on the left breast features a mountain, sun, and snowflake. It seems to be inspired by a possible logo for Walt Disney’s canceled Mineral King ski resort, which was developed in the 1960s.

His hair seems to have been replaced but is approximately the same as the old style.

Compare to their old outfits:

Mom and dad weren’t left out of the makeover. Dad (John) has darker and shorter hair.

He’s wearing a red Christmas sweater instead of a blue one. His green poinsettia apron has been replaced with one that reads “My food rocks!” That’s a reference to “Food Rocks,” which ran at EPCOT from 1994 to 2004. He’s still wearing a white button-up under his sweater.

Mom’s (Sarah) dark brown hair is pulled back and she has new dark-rimmed glasses. She’s wearing a grey sweater instead of a red one.

The scarf around her neck is red, orange, and blue. It’s similar to the old one but is new.

Here’s a picture of John and Sarah in their old looks.

Rover looks the same as always, with a big red bow around his neck!

What do you think of these changes to Walt Disney’s Carousel of Progress family? Let us know in the comments!

Next
‘The Art of Disneyland Paris’ Book Releasing on July 5