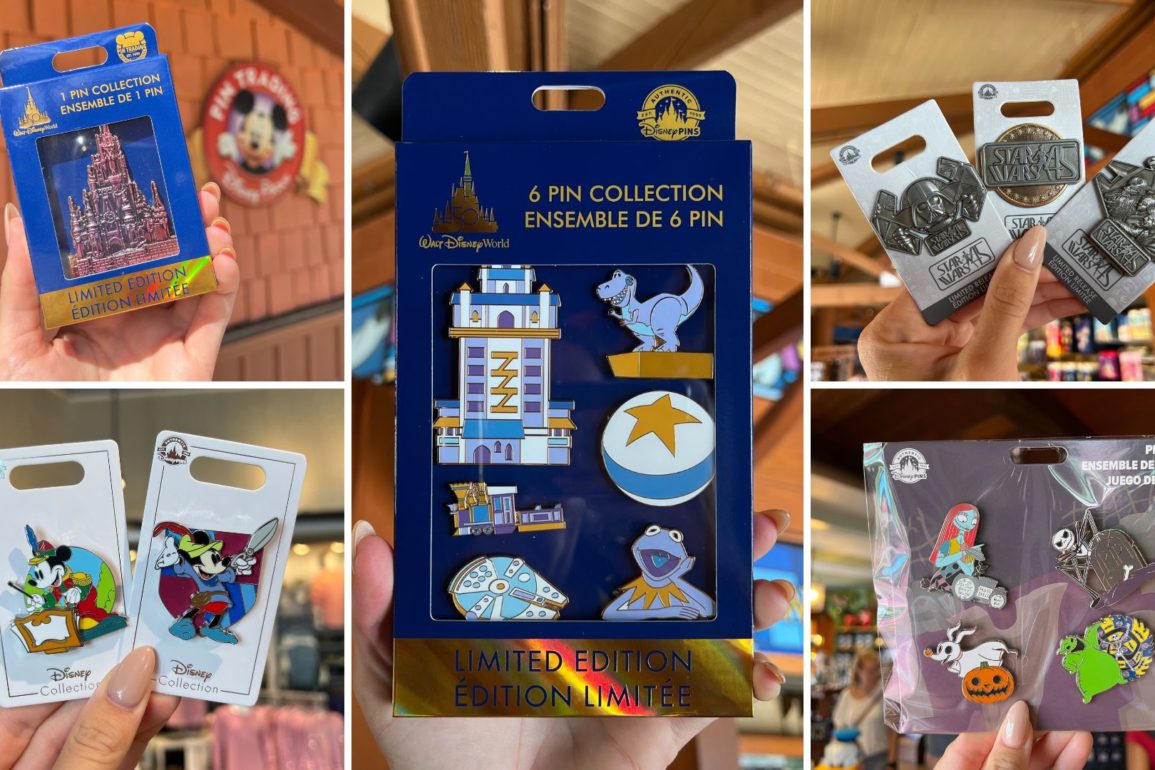 Several new pins have arrived at Walt Disney World this week, including some new limited edition 50th anniversary pins. There are also new “Star Wars” 45th anniversary pins, Mickey Mouse pins, and much more. Check it all out below.

One is of Sally working on her potions.

Jack leans out from behind a tombstone.

Zero flies around a jack-o’-lantern.

And Oogie Boogie stands next to one of his spiral spinners. We found this set in Ye Olde Christmas Shoppe at Magic Kingdom.

One reads, “Ooohh! Pizza!” A piece of pizza with a “Toy Story” alien hangs from the pin.

The other pin is layered circles, reading “My world revolves around pizza.” The center circle resembles both a pizza and a planet, with little alien heads all over it. A spaceship blasts across it.

The front is golden and 3D sculpted with Simba’s face.

Simba stands on Pride Rock inside the pin. This is inspired by The Lion King Celebration parade, which ran from 1994 to 1997 at Disneyland.

We found these next Mickey few pins at Star Traders in Magic Kingdom.

This one features Mickey in his “Brave Little Tailor” outfit, complete with a giant pair of scissors.

He is set against a shield emblem.

On this pin, Mickey is ready to lead a concert in his band leader’s uniform.

A cute version of Mickey drives Steamboat Willie on this black-and-white pin.

Next up, this “One Hundred and One Dalmatians” pin was also in Star Traders.

It features Roger at the piano, with Anita behind him. A dalmatian puppy sits on the piano. The Colonel, Sergeant Tibbs, Jasper, Horace, and Nanny are also on the pin.

We found several pins in BouTiki over at Disney’s Polynesian Resort.

This one features Disgust from “Inside Out” and the sparkly words “Whoa, too much enthusiasm.”

This set includes two pins: one of Miguel and one of his grandmother, the eponymous Coco.

Both are in a minimalist art style, with flowers around them.

These next two “Coco” pins are more in the style of the film.

Héctor is featured, in his skeletal form, playing guitar. The triangular background is patterned with colorful skulls.

This pin matches, with Miguel playing guitar against the same background.

This pin was in Frontier Trading Post at Magic Kingdom.

Also at Frontier Trading Post was this pin featuring the Incredibles family.

Dash slides across the pin slightly.

Mickey is dressed dapperly in a brown suit and boater on this pin. This is the outfit he wears in the “Nifty Nineties” film.

We found this and the rest of the pins below at Pin Traders in Disney Springs.

This pin features the four Dapper Dans in a Funko POP! style.

They are each holding a Mickey balloon in their corresponding color.

Stars and music notes float behind them.

One of these mystery boxes contains two random pins from a ten pin collection.

The box shows the ten pins, which all resemble Star Command patches.

Buzz and Sox are each featured on a pin, too.

There are eight pins in the collection.

There are three new limited release pins for the 45th anniversary of “Star Wars.”

This one is shaped like a TIE Fighter, but the image is that of Darth inside his TIE Fighter’s cockpit.

This pin features a silver bar atop a gold medallion.

The bar has the “Star Wars 45” logo. It slides up to reveal “May the Force be with you” on the gold piece.

The image inside is of Chewbacca, Luke, Han, and Obi-Wan in the Falcon’s cockpit.

Darth Vader’s helmet looms in the background, while Luke and Leia stand in the foreground. It has a limited edition size of 1,550.

This set includes two pins, one representing the Dark Side and the other the Light Side.

The Dark Side pin features Darth Vader and two Stormtroopers. A sparkly gold version of the Empire logo is in the background.

Both pins have the “Star Wars 45” logo on a plaque at the bottom.

The Light Side pin features Luke, Leia, and Han in front of the Rebellion logo. This set has a limited edition size of 3,100.

This circular pin has a light blue background. The retro Walt Disney World “D” logo is at the top.

A 3D sculpted version of Cinderella Castle is in the center.

This pin is part of an ongoing series featuring imagery from various Walt Disney World anniversaries. It reads “15 Years” across the silhouettes of Cinderella Castle and Spaceship Earth.

Mickey stands to the side, and “Walt Disney World” is across the bottom.

This set includes six pins representing Disney’s Hollywood Studios. They are all in the 50th anniversary colors of blue, gold, and purple.

The pins are of the Tower of Terror, Rex from “Toy Story,” the Pixar ball, Kermit, a Mickey & Minnie’s Runaway Railway train, and the Millennium Falcon.

Finally, this pin is the latest in a series featuring Cinderella Castle in different colors with different decorations.

The front of the pin is 3D sculpted.

This one is a shiny pink-purple, with the castle’s 50th anniversary decorations.

“Walt Disney World” is across a brick-like background on the bottom.

It opens with a hinge.

Each of these pins shows a different scene from “Cinderella” inside. This one has Cinderella and Prince Charming in their carriage after getting married.

The 50th anniversary logo is also on the inside.

This pin features Mickey with a pink and yellow birthday cake. It reads “Happy Birthday” along the bottom and comes in cake-inspired packaging. This was in the Darkroom at Disney’s Hollywood Studios.