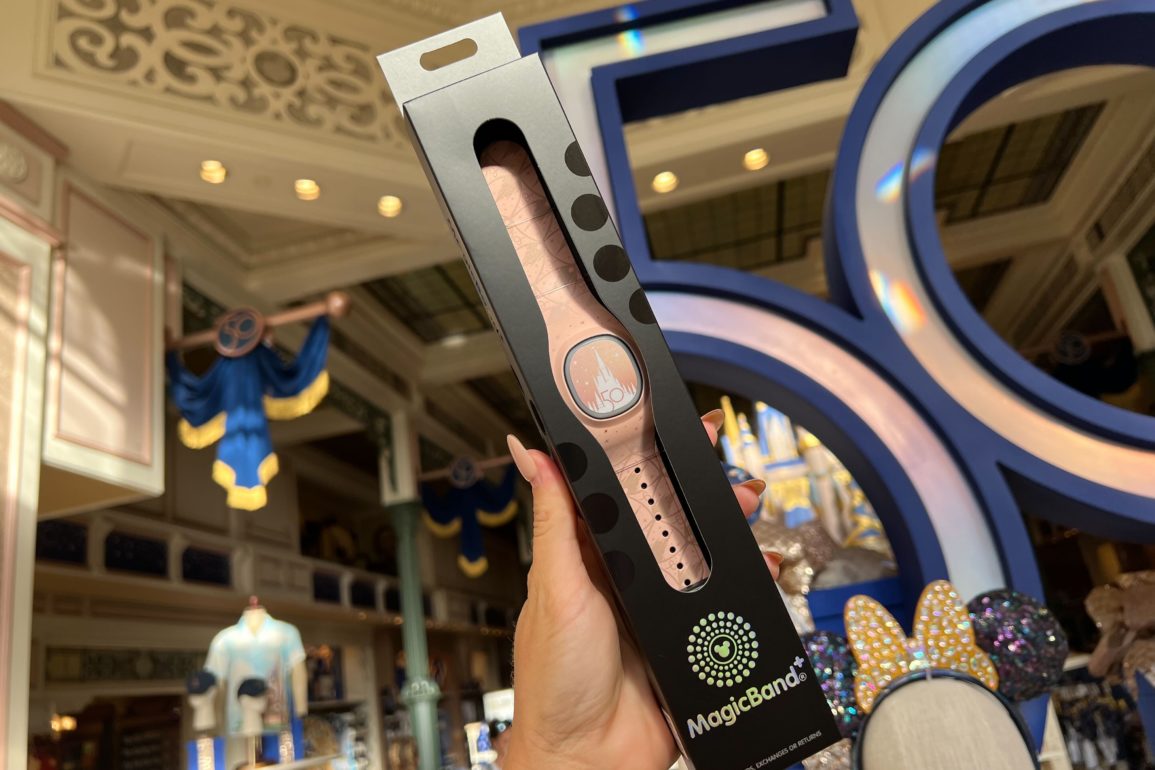 Royal greetings from Magic Kingdom! MagicBand+ debuts today and we’re excited to see all of the new designs offered so let’s go see them!

There was already a small crowd around them at the Emporium once we were let in the park. Although it looks like it, it was pretty calm and the Cast Members were great at answering questions and keeping the shelves stocked.

There were over 30 designs available, minus the super popular Partners Statue 50th design, which did not seem to be launched at any of the parks but was available online.

Charging cables were also available for guests to purchase, although the bands do come with their own charging cables. Many guests were standing around the Emporium needing assistance from Cast Members to help link their bands.

After we picked our designs, we made our way out to the hub to see if the bands were being used. Lines at Guest Relations and Guest Experience kiosks weren’t too bad. Many guests were not aware they needed to charge and update their bands after purchasing.

Not many people were waving to the statues throughout the day, and we passed quite a few parties that did not understand how it worked or knew they needed the Play Disney app to take part in the Fab 50 Quest.

Play Disney app signs were added to the Mickey and Minnie statues in the hub with a QR code inviting them to get the app. Make sure your band is charged for this! It may drain your phone or battery power pretty quickly.

We popped over to TRON to see what progress is being made there and saw a rather large new construction vehicle on the site.

Work is progressing at Tomorrowland Light & Power Co., which is now scheduled to close during the refurbishment period starting August 1.

Big Top Souvenirs in Storybook Circus has some new candy treats! Lightning McQueen has some lemon and cherry gummy steering wheels, and Minnie Mouse is featured on sour taffy pieces.

Throughout the day, we noticed our band randomly vibrating in places where it probably shouldn’t. Like Sir Mickey’s?

Arggh! These new Pirates of the Caribbean shorts and shot glass are out at Plaza del Sol Caribe Bazaar at the exit of the attraction.

It was time to head out! So we made our way over to Disney’s Polynesian Village Resort, where some new Vault Collection pieces were available to purchase.

A shirt, loose-fitting pants, and 15th anniversary terry skirt are on the shelves here.

We took a walk along the beach to check on the progress of the walkway. Work is still underway on a small portion of the path connecting the beach to the dock.

We’re grabbing a Dole whip and hanging out on the beach; thanks for following along!

Next
PHOTOS, VIDEO, REVIEW: Worlds of Marvel Quantum Encounter on the Disney Wish — “Honey, I Shrunk the Dinner Show Budget”