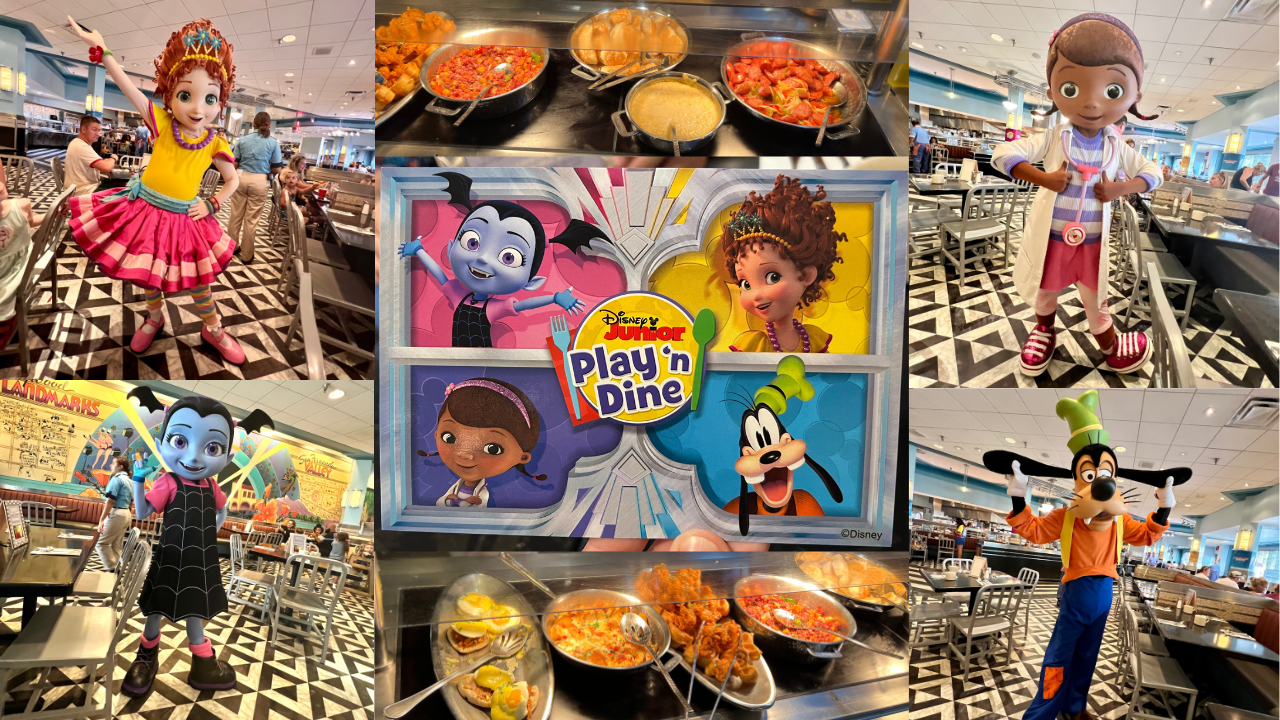 Today the buffet at the Disney Junior Play ‘n Dine character breakfast at Hollywood & Vine reopened for the first time after being removed due to COVID-19. We popped into Hollywood Studios this morning to check it out.

You of course can use the MyDisneyExperience app to check-in on mobile, but if you need to with a Cast Member, they are stationed at a table outside the restaurant. This is also where you will go once you are texted that your table is ready.

The entranceway of the restaurant has a step-and-repeat for photos with each of the characters that are visiting: Doc McStuffins, Vampirina, Fancy Nancy, and Goofy.

You’re also given a character autograph card with facsimile signatures of each character. That being said, we did see the characters sign actual autograph books as well.

We started our trip around the buffet line at the bread: with bagels, everything bagels, white and multigrain bread, butter, and jelly.

Guests can self-serve their own oatmeal toppings: brown sugar, raisins, and granola.

Tomatoes, onion, and capers are all available here as self-serve toppings before transitioning to the hot buffet.

Of course there are cheesy potatoes.

The three-cheese chorizo scramble stands out here among the other traditional buffet offerings of scrambled eggs, bacon, sausage, and chicken sausage.

Tomato jam is available to add to a plant-based frittata.

Cornbread pudding and brioche french toast with bananas foster sauce are available. The French toast tray was pretty decimated when we went up to it, but that’s how buffets work.

The hot buffet continues with Eggs Benedict, salmon and bagel casserole, and chicken and Mickey waffles.

The waffles were in much better shape than the french toast.

An omelette station is available for made-to-order omelettes.

Next to the omelette station is a spot for you to top your sweet breakfast items with whipped cream, syrup, chocolate chips, and more.

The children’s station has pancakes, Mickey waffles, tater tots, and a scrambled eggs covered with cheese.

Vanilla and strawberry yogurt is available with self serve toppings.

Traditional breakfast cereal options and milk are available as well.

What breakfast isn’t complete without some soft-serve ice cream? Especially with chocolate or caramel syrup and sprinkles.

While the character meet and greet options at Hollywood and Vine are mostly Disney Junior, we do get a visit from a member of the fab five: Goofy! He’s representing the Mickey Mouse Funhouse show here.

Doc McStuffins and Fancy Nancy are excited to see us!

The characters will roam the restaurant, with two of them staying to each side for a time, then switching. Every so often, a prompt to dance will play and the characters will dance around the room to the DJ Shuffle. While the announcements still ask everyone to remain seated, we saw the characters invite children to come dance with them, so it may just be a delay in getting updated “post-COVID” announcements for the venue.

All of the fruit was fresh and sweet, a nice variety, more options than you typically see. Smoked salmon was standard Disney buffet quality, good but not great. Avocado smash was exactly that: avocados. Smashed. Some nice chunks in it, you could make a good avocado toast with it.

The spinach and bacon salad was a refreshing option, made of spinach and arugula, chopped onions, and plenty of crispy bacon. Where this salad was lacking was the dressing. There was very little of it: a bland vinaigrette that added almost nothing.

The quinoa salad was somewhat tasteless. Red and white quinoa, blueberries, mandarin orange pieces, and golden raisins plus some greens.

The standard fare is what you would expect: edible but not remarkable. The baked goods, scrambled eggs, bacon, and sausage are all good enough. The cheesy potatoes are probably over-topped as the cheese glob at the surface was pretty thick. The chicken sausage is a nice change of pace, also a healthier option for those who care. The three-cheese chorizo scramble is a standout winner from the bunch, offering spicy sausage with onions, peppers, and obviously cheese and eggs. There are few things on the breakfast buffet I would look forward to eating again, but this is one of them.

The cornbread pudding was inedibly salty. There must have been a mistake either in the recipe or the preparation. I really had high hopes for this, it looked so good. I can’t imagine they won’t fix it so don’t let this stop you from trying it in the future.

The frittata was very bland, containing mushrooms and onions which did little to save it. The tomato jam you could add didn’t really help it either.

The french toast was a little too crispy for my taste, but it was edible with the sweet sauce full of sliced bananas.

The chicken and waffles was an exciting offering to see, but sadly it fell flat. The waffle is hit or miss depending on how fresh it is when you get it. The chicken was disappointing, perhaps too drenched in the bland sauce to keep its usual crunchiness. I’ve had Disney’s ubiquitous chicken breast nuggets on top of Mickey waffles before and this was the worst version of that I have experienced. Our server indicated that the dish was spicy during test meals, but it seems that was significantly toned down since, now to the point where the entire offering is nearly flavorless. If you’re looking for a better version. of this dish, try the Roaring Fork at Disney’s Wilderness Lodge.

I can remember years ago that all corned beef hash at buffets was from a can. We’ve come a long way from those days, but at $42 a head they can’t really serve that. This instance was average though; there wasn’t a lot of flavor other than salt. It was also somewhat dry, which may be a consequence of being on a buffet, but I feel like this could be significantly better with a bit more effort in the preparation.

Discovering pulled pork on the “Eggs Benedict” was a bit surprising since the sign didn’t mention it. Usually “Eggs Benedict” means the standard Canadian bacon, and they call anything else an alternative named Benedict. The eggs were over cooked as is often the case on a buffet offering, and the hollandaise was scant and somewhat solidified. The pork itself was juicy and had a nice smokey flavor, but the execution needed to be better on this.

The sausage, onions, and peppers were standard, yet good. The sausage was a spicy kielbasa essentially, well accented by the aforementioned accompaniments.

For me, the most interesting concept was the salmon and bagel casserole. Disney buffet often serve a pretty nice salmon, and this is no exception.

The salmon is essentially coated with a mushy cream that has the flavor of a bagel with cream cheese and chives. It works really well as you might guess since salmon and bagels are a long-standing breakfast pairing, but the cooked salmon and bagel puree is a new take on a classic. I would have this again.

The children’s station offers some pretty solid pancakes and Mickey waffles, along with cheese covered eggs which, for me, were a step up from the plain scrambled offering on the adult buffet.

The Apple Crisp is plant-based. It isn’t anything extraordinary, but it excels at what it is: fresh apple coated in caramel sauce with granola mixed it. It’s quite good.

Character breakfast buffets at Walt Disney World are not known for their quality, they’re known as places where you can get pictures with characters and eat some eggs and a Mickey waffle. Hollywood & Vine does little to change that as the buffet is unremarkable. If you are in the market to meet these Disney Junior characters, this is a pleasant and fun way to do it, just don’t expect to be blown away by the cuisine. That being said, we would recommend lunch and dinner and Hollywood & Vine, but do not that is a completely different set of characters that does not include the Disney Junior gang.

Are you planning to visit this buffet next time you visit Hollywood Studios? Let us know in the comments.