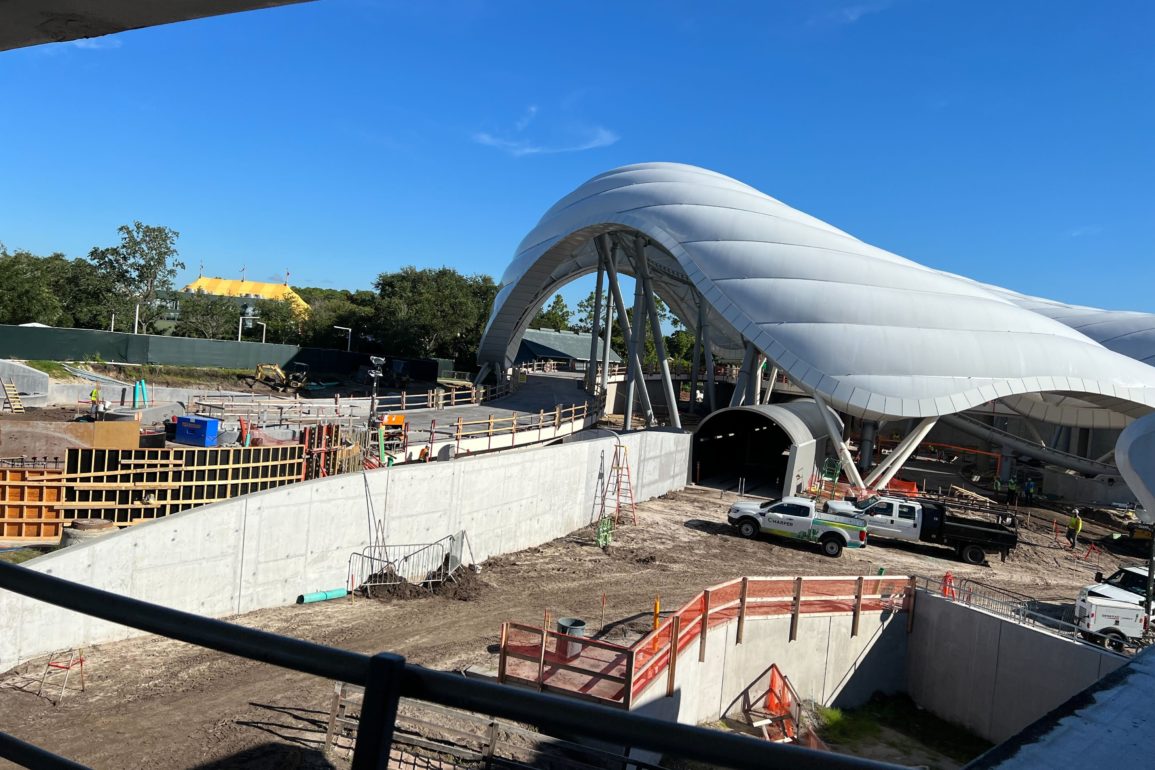 Crews have added a steel framework to this corner of the gift shop.

Sheathing now covers most of the framework, which includes an extension to the building’s small awning.

Some pipes are visible through the exposed steel.

This morning, crews were working on the corner closest to the shop’s entrance.

The awning has been extended here as well. Crews have removed some of the building’s paneling for work.

One crew member was in a scissor lift, while another was on the extended awning.

Blue tarps cover most of the awning on the side of the building. There is black sheathing taped to this corner of the awning.

Construction walls block access to the walkway next to Tomorrowland Light & Power Co.

Eventually, this will act as a gift shop for both Space Mountain and TRON Lightcycle / Run.

We also checked in on the coaster itself during a ride on the Tomorrowland Transit Authority PeopleMover.

The foundation of a new walkway connecting Tomorrowland and Storybook Circus has been extended. It now cuts off just past a concrete wall. In the background, a crew member was working within a circle of concrete around the coaster’s canopy supports.

We saw another crew member reaching into one of the large concrete planters.

There’s a planter between the Storybook Circus walkway and the elevated walkway leading to the coaster entrance.

In addition to, well, plants, the planter may hold signage pointing to Storybook Circus and Fantasyland.

The planter at the front of the TRON Lightcycle / Run walkway will have a sign for the attraction. These two planters and the elevated walkway are surrounded by temporary wood fencing. Crews also have yet to complete paving at the end of the elevated walkway. In the photo above, it’s clear that a square of walkway on the right is slightly lower than the rest of the sidewalk.

A cherry picker vehicle is parked next to the PeopleMover track. We saw a concrete pump a week ago, but it is gone now.

Walls extend between the elevated walkway and the PeopleMover track.

Some of the walls are partially encased in concrete, but there is still a lot of exposed wood and steel.

Crew members were working with panels of wood on workbenches this morning.

The PeopleMover drives past these access stairs, which lead down between two walls.

One wall is right next to the elevated walkway. This will presumably separate guests from backstage areas.

Another wall, now fully encased in concrete, separates that backstage area from the Walt Disney World Railroad tunnel. Tracks will eventually lead out of the tunnel, past the wall.

Track rails have already been installed inside the tunnel.

Small lights line the walls of the tunnel. We could at least one crew member working inside today.

The arched framework supports lining the pathway leading to the TRON Lightcycle / Run entrance now have translucent pieces covering them.

The coaster will launch from below the elevated walkway.

Some green sheathing is still exposed on the show building.

Brown tarps hang from the supports directly in front of the entrance.

The themed elements above the entrance now look more like metal.

From Storybook Circus, we can check out the lockers building attached to the elevated walkway.

This is where Walt Disney World Railroad trains will enter the tunnel.

The concept art above shows us approximately what TRON Lightcycle / Run, the Walt Disney World Railroad tunnel, and the surrounding walkways will look like when completed.