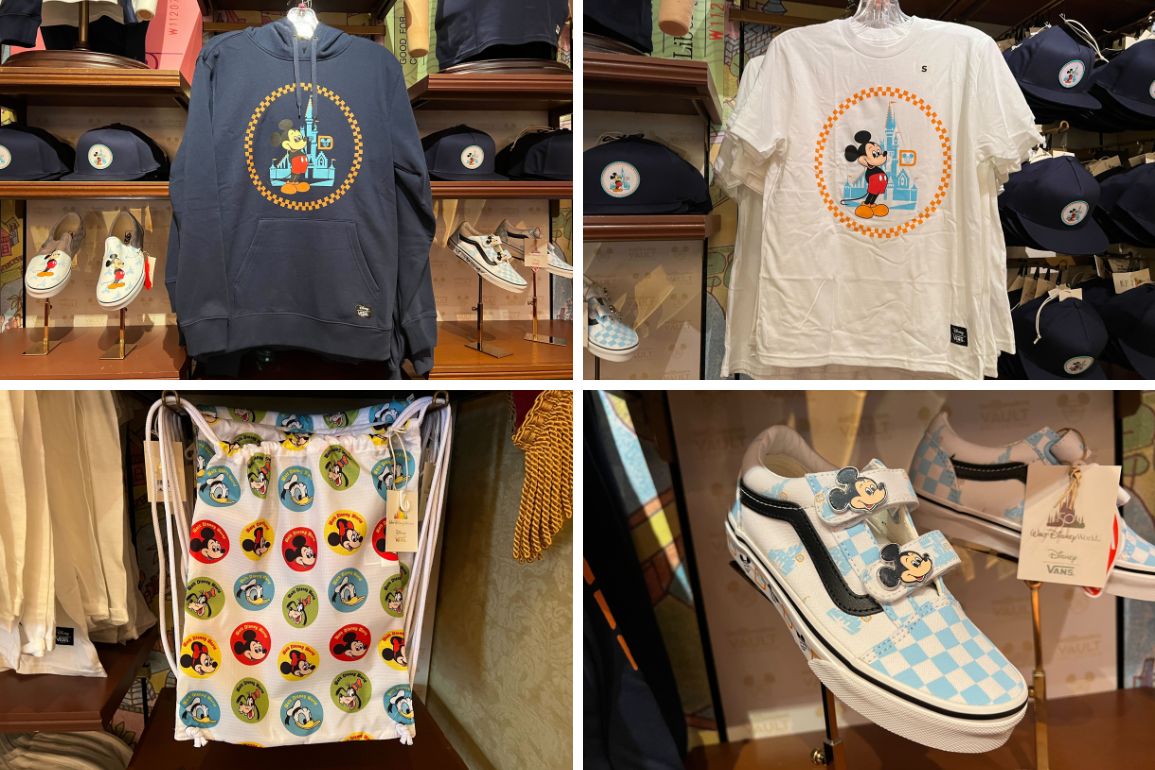 Walt Disney World continues to celebrate its 50th Anniversary celebration with new merchandise from the Disney x VANS line. We found these must-have retro-style collections at the Main Street Cinema in the Magic Kingdom.

This short-sleeved white t-shirt has recently been added to the Disney x VANS 50th Anniversary collection. On the front upper left chest are three silk-screened “stickers” of Goofy, Minnie Mouse, and Donald Duck. Towards the lower left side bottom, near the hem of the shirt, is a black square with the Disney x VANS logo.

On the back, covering nearly all of the upper half of the t-shirt is a large “sticker” of Mickey Mouse.

A closer look shows Mickey, also in a three-quarter profile, set against a red background with “Walt Disney World,” in bright yellow, arching over his head.

An overview of the “Sticker” collection of Disney x VANS merchandise.

This colorful “sticker” backpack drawstring backpack is perfect for carrying snacks, souvenirs, or personal items while running around the parks or on errands long after your vacation is over. On either side of the bag are white nylon cords that are strung through the top of the sack and double knotted at the bottom.

A closer look at the nylon backpack shows rows of Mickey Mouse and Minnie Mouse alternating with rows of Donald Duck and Goofy. The backpack is made from a ripstop material for strength.

The backpack has one large main compartment and a wide opening mouth that makes it easy to load and unload.

The bag has reinforced bottom corners and silver metal grommets that make this bag sturdy.

This short-sleeve shirt is the child’s version of the “Sticker” t-shirt. This shirt comes in black and features the same three characters, Goofy, Minnie Mouse, and Donald Duck, on the upper left side of the chest and the Disney x VANS square logo tag on the lower left side.

The dark material provides a nice contrast to the vibrant colors on each of the character’s silkscreened “stickers.”

As with the adult version, a large Mickey Mouse can be found on the back of the t-shirt on a red background with “Walt Disney World” in yellow.

How cool are these sneakers?! According to the VANS website, the Old Skool shoe, which debuted in 1977, was “first known as the Vans #36.” The original shoe had a “unique new addition: a random doodle drawn by founder Paul Van Doren. Originally known as the “jazz stripe,” this stripe has become the unmistakable hallmark of the Vans brand. And now there is a version celebrating Walt Disney World’s 50th Anniversary.

The shoe features the best of VANS and Walt Disney World. The front, uppers, and heel feature the classic skateboarder checkerboard pattern in white and light blue.

This dark blue classic baseball cap features a large patch with the vintage Mickey Mouse/Castle logo found on merchandise in the 70s.

The logo, trimmed in turquoise and alternating gold and white square features Mickey Mouse standing with his hands behind his back against the silhouette of Cinderella Castle in turquoise with the original “D” logo in gold and the Mickey globe head in the center.

The back of the hat has “Off The Wall” stitched in gold lettering and an adjustable plastic strap.

This nylon backpack features all the classic Disney characters – a la the “Mickey Mouse Club.”

On a navy background, Daisy Duck and Minnie Mouse are holding a banner that reads “Magic Kingdom – Walt Disney World.” Mickey Mouse is dressed in his bandleader outfit while the other characters play various instruments. The backpack itself is made from a ripstop material for strength.

The black nylon drawstrings are double knotted on either side at the bottom.

This dark blue “pre-opening” t-shirt features the classic “D” logo with the Mickey Mouse globe inside and “Walt Disney World,” “Opening Oct. 1971” underneath.

The back of the shirt has the logo that every opening day fan recognizes.

Mickey Mouse poses against the light blue image of Cinderella Castle with the Disney “D” and Mickey Globe ears off to one side. The image is surrounded with alternating dark blue and gold squares.

With the same design as the drawstring backpack, this child’s t-shirt features Mickey Mouse and friends from the “Mickey Mouse Club.”

There is also an adult version of the “Mickey Mouse Club” t-shirt. This version, also in dark blue fabric, features “Walt Disney World” in white and “The Vacation Kingdom of the World” in yellow on the front of the shirt.

The back of the shirt has a large image of Mickey and friends surrounding the “Magic Kingdom” banner in the upper center of the shirt.

This sweatshirt has the Mickey Mouse/Cinderella Castle image on the front. It features a large front pocket with two slits, a banded waistband, drawstrings for the hood, and ribbed cuffs.

As with the adult version, the white t-shirt has Mickey and Cinderella Castle surrounded by a gold and white checkerboard ring with the “D” globe logo off to one side.

The back of the shirt is left unadorned.

Check out some of the other Disney x VANS merchandise available throughout Walt Disney World:

Have you purchased any of the Disney x VANS merchandise? If not, will you? Let us know in the comments below.

Fort Wilderness Resort & Campground Guests Asked to Stow All Outside Items, Guests in Tents Being Offered Alternate Accommodations Due to Hurricane Ian