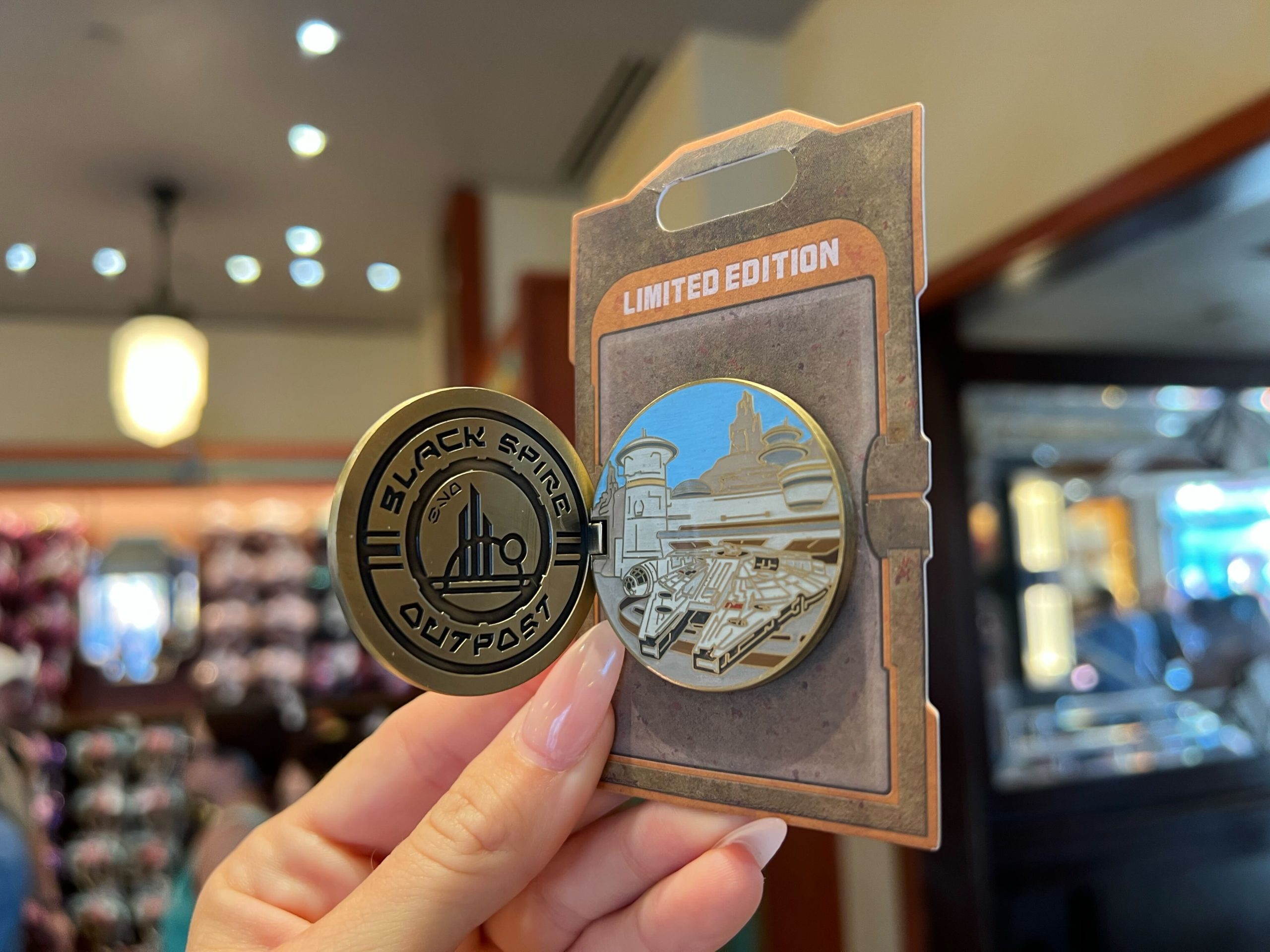 Fans went crazy when Disney unveiled its newest land, Star Wars: Galaxy’s Edge, at Walt Disney World. Although there are many “wow” moments, a fan favorite is when guests see the Millennium Falcon standing before them outside the entrance to the Millennium Falcon: Smugglers Run attraction. Now that scene (and moment) is memorialized in a Limited Edition Black Spire Outpost “Ohnaka Transport Solutions” pin we recently found in The Darkroom at Disney’s Hollywood Studios.

This bronze-colored Black Spire Outpost pin, which is limited to 3,000, is embossed with the logo for the attraction’s in-universe setting. The Millennium Falcon is pictured in a hexagon, speeding off into the stars. Around the rim of the pin in Aurebesh is, “Ohnaka Transport Solutions.”

Ohnaka Transport Solutions is part of the story for the attraction. Guests are roped into working with Hondo Ohnaka, a notorious smuggler first seen in the “Star Wars: The Clone Wars” cartoon, to transport coaxium. Though the business is presented as a transport company, it seems Hondo hasn’t given up his old ways.

Opening up the pin reveals the Millennium Falcon parked in Docking Bay 5 at Black Spire Outpost, which is where Hondo’s base of operations is located. Guests have the rare chance to fly in the legendary ship because Chewbacca has loaned it to Hondo in exchange for some hard-to-find parts for the old “bucket of bolts.”

The Falcon is a Corellian YT-1300fp freighter designed for hauling both cargo and passengers, which makes it the perfect ship for an operation like Hondo’s. However, the real reason he wanted to borrow the ship is the sensor-proof smuggling compartments.

“Black Spire Outpost” is debossed in black on the inside cover, along with the symbol of the city. On the upper left-hand side of the city logo is “BSO” in Aurebesh.

This pin is made from metal and enamel. Set against a bright blue sky, the scene shows the Millennium Falcon in silver and trimmed in gold with black accents, in the center of the Black Spire Outpost. The Docking Bay (a.k.a. entrance to the Millennium Falcon – Smugglers Run attraction) is also in silver, black, and dark grey with gold-toned accents.

Millennium Falcon: Smugglers Run at Disney’s Hollywood Studios put guests in charge of Han Solo’s iconic ship. Guests are assigned roles to complete the mission with six people working together: two pilots, two engineers, and two gunners. Read all about the attraction and our review from the grand opening here. Guests visiting Batuu from the Star Wars: Galactic Starcruiser can also discover how the attraction ties into the onboard story.

For more Millennium Falcon merchandise, check out the line of apparel that debuted earlier this year or the Falcon-themed MagicBand+ (which you can use to play Batuu Bounty Hunters!).

Will you be adding this Black Spire Outpost hinged pin to your collection? Let us know in the comments below.