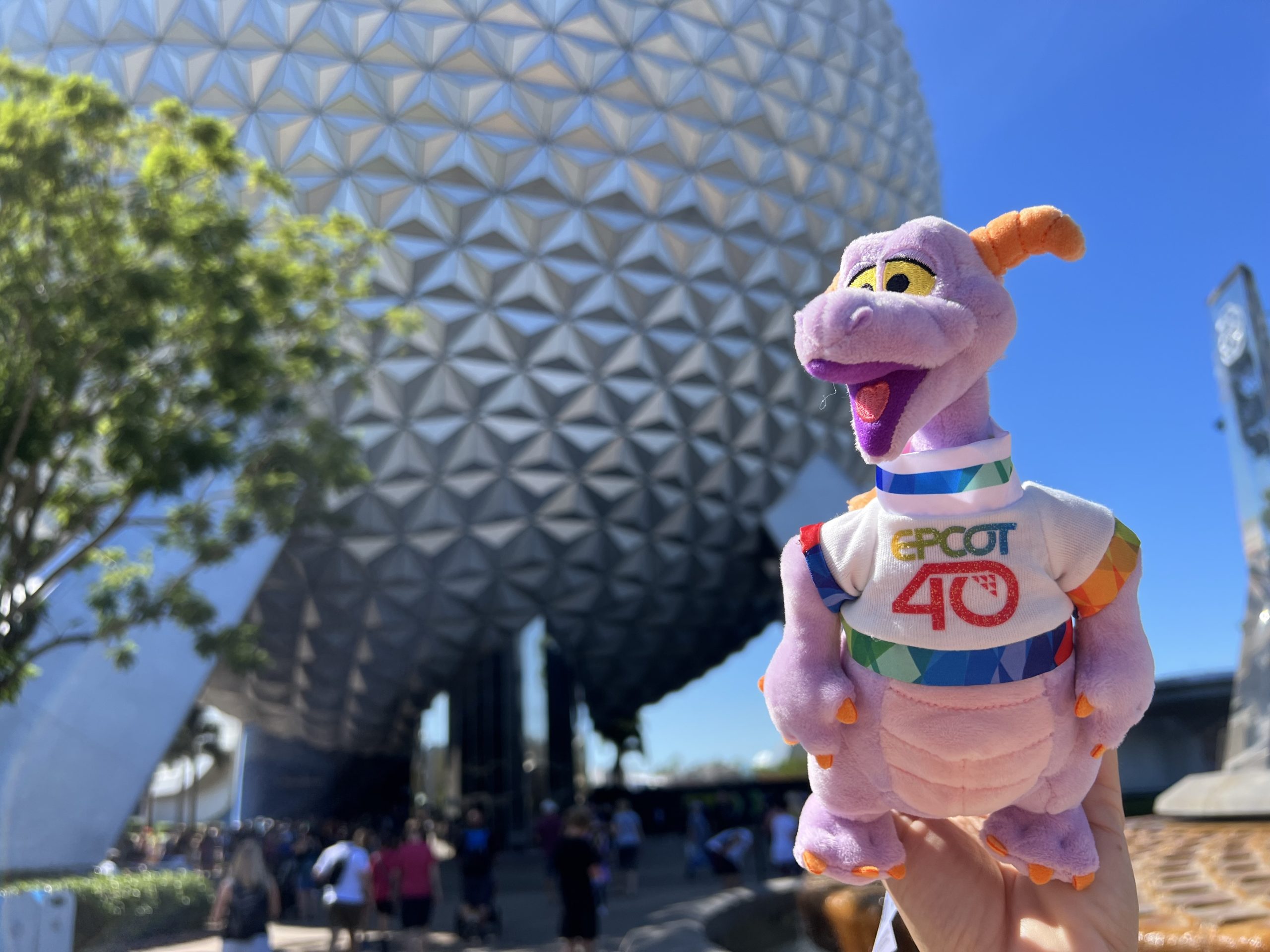 Good morning from EPCOT’s 40th anniversary! We’re celebrating the birthday of one of our favorite parks today and there’s a LOT to do, so let’s get started!

As we were walking up to enter the park, we saw colorful EPCOT 40th pole wraps that were placed along the ticket booths.

After we tapped in, we were able to grab a 40th commemorative guidemap! The color story matched that of the banners out front the park. Another special surprise, the current EPCOT entrance music loop that plays in the park was replaced with the original entrance music from 1982!

There were quite a few people waiting to get in the park for the special day, and a lot of excitement for the new merchandise released at Creations.

At 8:30am, we joined the masses heading towards Creations to shop!

The line had already began to form from early resort guest entry and by the time we reached the end of the line, it had already grown down to The Seas pavilion.

We were quoted a 2 hour wait from our vantage point. It’s a beautiful, cool, sunny day so we don’t mind being outside.

Cast Members were handing out a sheet with all of the pins available to shop inside as we got closer to the entrance.

After about and hour and a half, we were in! It was chaos.

Don’t forget to look up! Whenever there are big events or festivals you can see Figment dressed for the occasion up top.

There was plenty of 40th merchandise to chose from. A rainbow Loungefly and matching wallet caught out eye first.

Look at the Figment decor…

…and a matching Figment plush to boot.

The Spirit Jerseys were had each of the pavilion logos running down the sleeves.

Dated merchandise items were available near the Guardians of the Galaxy: Cosmic Rewind merchandise.

There were plenty of pins and Annual Passholder merchandise available, most of which featured the famous purple dragon.

We had to get one for ourselves!

At 11 a.m., there was a special ceremony at America Gardens Theatre.

Holographic commemorative prints were being given out at the park’s exit. These were a lot sturdier than those from Magic Kingdom at the 50th anniversary celebration last year.

As we made our rounds about the park we noticed Remy was missing from many of the countries still, most likely removed from Hurricane Ian preparations.

We did notice a small plate with artwork of the Remy that usually sits on the roof here.

Art of Disney also had a decent crowd today for the print and postcard set that came out celebrating the park Upwards and Onwards.

All of the scrim that was previously draped around Mitsukoshi in Japan has been removed and you can freely walk about the store again.

The large Remy topiary is still missing from the France pavilion. He was removed before Hurricane Ian hit a few days prior.

Cool Wash over in World Discovery has been gutted but not much else is happening on the site.

The canopy at Test Track is still missing as well after it became a casualty of the storm.

At the end of the day, we made our way back to the front of the park to catch Spaceship Earth lit up for the 40th. It was awesome!
Our boarding group was just called for Guardians of the Galaxy: Cosmic Rewind so we’re off to hopefully catch our favorite song to end this day on a high note. Thanks for following along!

PHOTOS, VIDEO: Behind the Seeds Tour Returns to The Land Pavilion at EPCOT