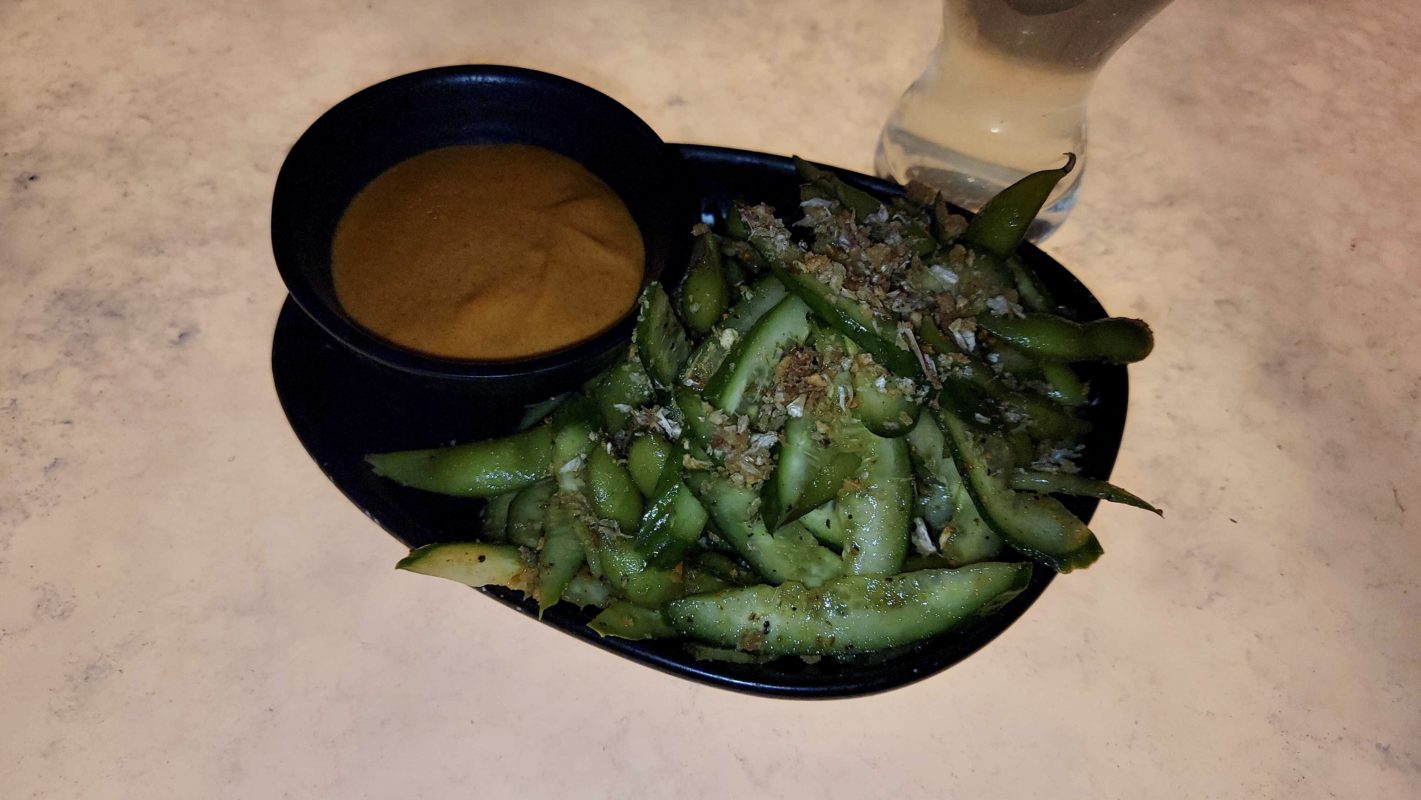 Oga’s Cantina is known for awesome music courtesy of DJ-R3X, and a wide variety of “otherworldly” drinks. And for Life Day this year, a new dish called Spicy Wroshyr Pods have been added to the line-up. So let’s give them a try!

The Wroshyr tree is native to Kashyyk, so this is a very appropriate dish for Life Day.

The Spiced Wroshyr Pods are seasoned edamame topped with crispy fried onions and served with a citrus gochujang dipping sauce. The seasoning is hard to describe as it is so complex and no one flavor rears its head. It’s a nice compliment to the edamame, whose flavor comes through substantially and enjoyably as you would expect for the dish like this. They are served cold, and are nice, light pairing to the many fine cocktails at the Cantina. The citrus gochujang dipping sauce is a triumph, and would be a pleasant dip alongside just about any savory dish, but especially with this.

Dipping the seasoned cucumbers in the gochujang brings more of a citrus flavor whereas dipping the edamame pods in the sauce bring us more of the chili flavor, so different notes are brought out by different flavors when eaten all together. We will likely be returning for these Spiced Wroshyr Pods next time we’re here, if we can get on the walk-up list that is.

The Sesid Seltzer is not technically new as it debuted for May the Fourth this year. However, every time we visited Oga’s, it was unavailable. It’s named after the Outer Rim planet Sesid, located in the Corva sector.

This is a hard seltzer with tropical flavors of pineapple and orange. It’s hard to pick out the pineapple or the orange, and it just settles somewhere in the vaguely tropical zone. That being said, this is one of the more enjoyable hard seltzers we’ve ever had the pleasure to sample on Batuu or any other world.

REVIEW: Pistachio-Cherry Churro Returns for the Holidays at Disneyland