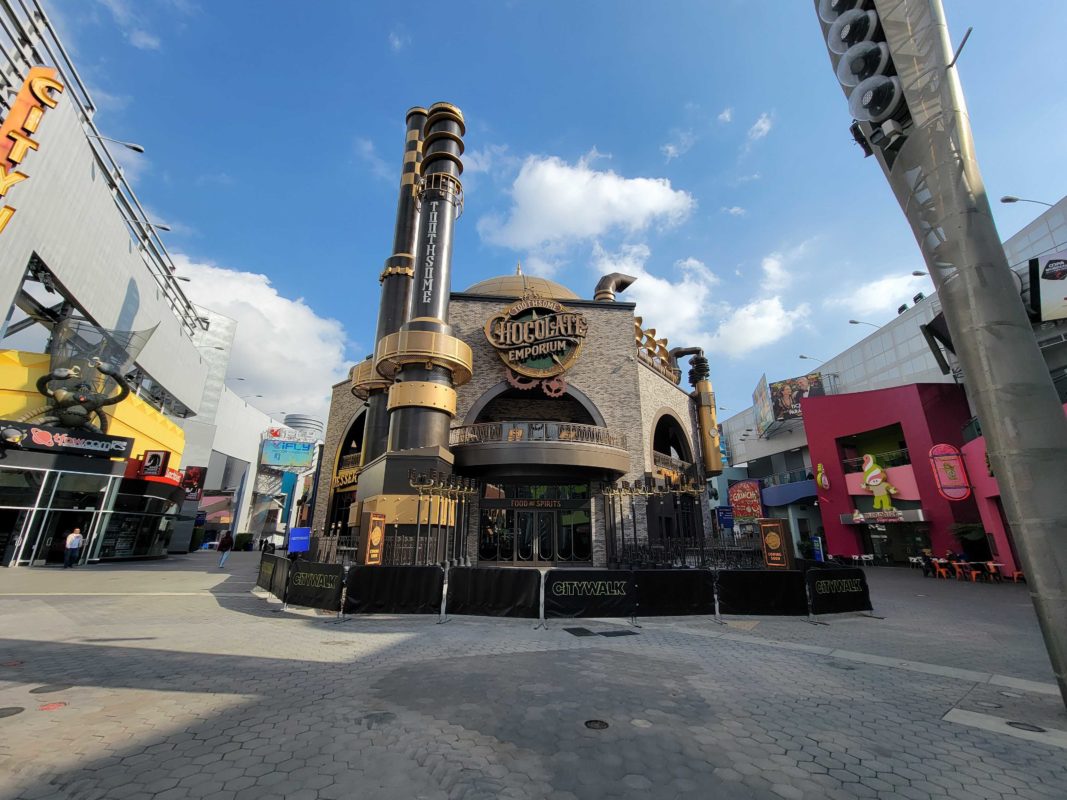 We stopped by Universal CityWalk Hollywood to see how the construction was coming along at the Toothsome Chocolate Emporium & Savory Feast Kitchen. This will be the third Toothsome eatery after Orlando and Beijing.

Previously there were large construction walls surrounding the restaurant, but now they have been removed and the building is now just partitioned off by a simple barricade.

In addition to a large inside eatery, there is outdoor patio seating off to one side.

They have made quite a bit of progress on the building. It was only in October that we reported that scrims covered all the smokestacks and there was very little detail on the façade.

Then entrance is lined with lighting that mimics the towering smokestacks. The balcony, just below the sign, will also have some outdoor seating.

The building has a very steampunk feel to it with lots of aesthetics inspired by 19th-century industrial steam-powered machinery including metal finishes, rivets, bolts, and gears.

We were able to take a peek to see what the inside of the restaurant looks like and found there has been lots of progress made to date.

If this is like the other Toothsome locations, this area will be where guests can purchase gourmet chocolates, fudge, freshly baked cookies, and other sweet treats. Guests will also be able to purchase Toothsome Chocolate Emporium-themed merchandise here as well.

Toothsome Chocolate Emporium & Savory Feast Kitchen is also known for some decadent milkshakes that can be ordered table-side or to-go. Some shakes that have been offered in the past include a Marshmallow Crisp shake that has vanilla ice cream, rice crispies, marshmallow fluff, whipped cream, and a Rice Krispy treat precariously balanced on top.

Universal has not given an official opening date other than early 2023.

To see what you can expect from its West Coast cousin, check out our review of the Toothsome Chocolate Emporium & Savory Feast Kitchen at Universal Orlando’s CityWalk”

Here is some of our continuing coverage of the Universal CityWalk Hollywood location:

Are you excited to see Toothsome Chocolate Emporium & Savory Feast Kitchen open at Universal CityWalk Hollywood? Let us know in the comments below.