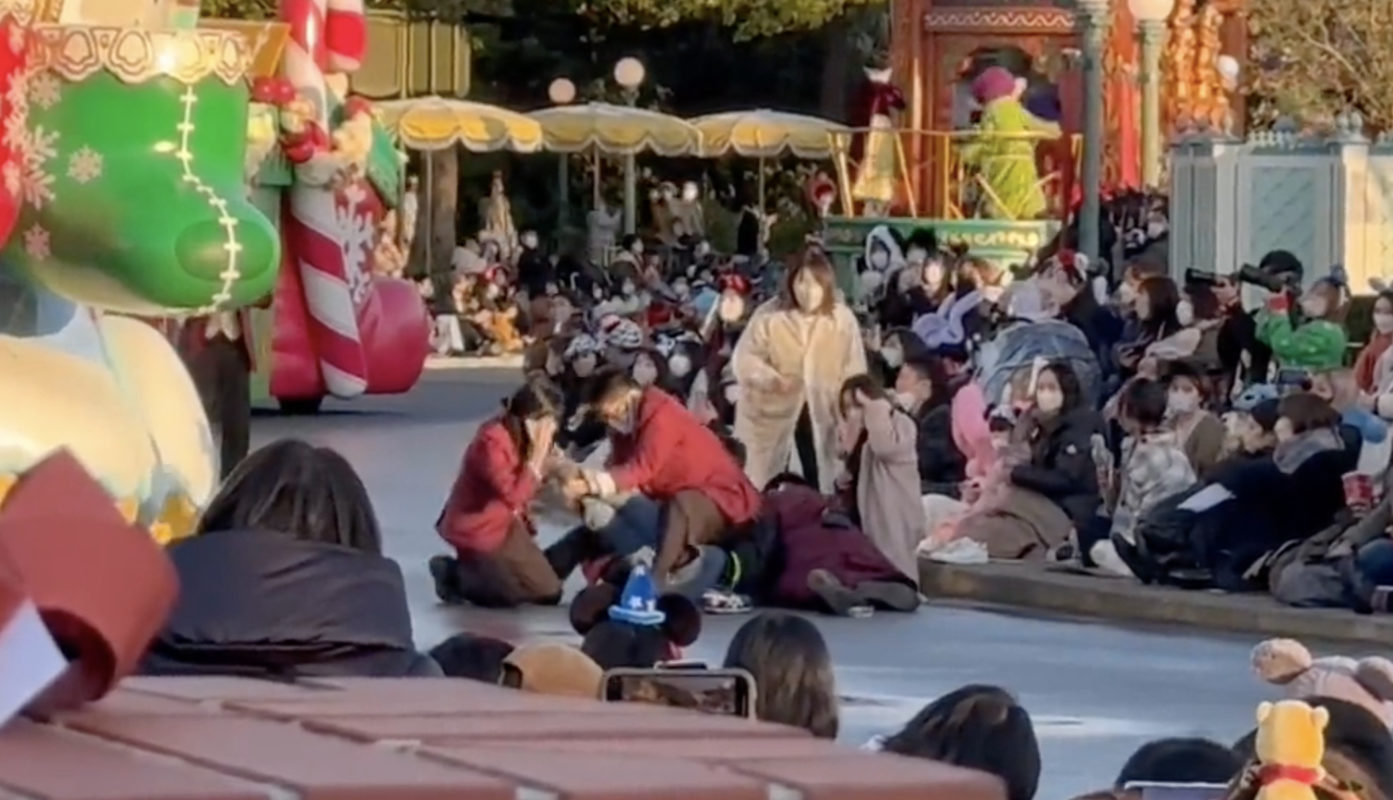 During today’s performance of the “Disney Christmas Stories” parade, a guest at Tokyo Disneyland decided they needed to be part of the show… sort of. As the parade began its pass around the park’s hub, where many guests choose to take in the show, one decided to lay down in the middle of the route just as the first float approached.

According to multiple guests on Twitter as well as local news media, the guest barged into the middle of the route, after charging towards the performance from World Bazaar. The male guest of middle age quickly barged onto the route, nearly running into a costumed elf performer, before being very quickly tackled by a show control Cast Member.

Guest control Cast Members and park security held the guest down so the parade could continue as scheduled, causing an approximately six minute delay.

The aftermath was captured on video by user @pienpienna, which shows Cast Members being forced to lay on top of the guest until police could arrive as he continued to struggle. Character performers in front and on the unit of course stayed in character, working to keep guests distracted even as the fast-moving parade floats piled up behind the opening unit.

Video from user @_panda415 shows the guest being forced out of the park by a team of seven park security Cast Members. He was indecipherably shouting on his way out.

Show intrusions like this are incredibly uncommon, especially at Tokyo Disney Resort. The only other which comes to mind is an incident back in 2011, when a guest briefly invaded a performance of the Tokyo DisneySea 10th Anniversary show “Be Magical!,” which featured plainclothes dancers dressed as normal guests being “enchanted” and jumping from the audience to join the show. At the time, the guest was calm about leaving the performance and was quietly escorted from the park without resistance.

This incident does also somewhat recall a man who was forcibly ejected from Disney’s Hollywood Studios at Walt Disney World in 2020 for refusing to wear a mask, screaming misquoted “A Bug’s Life” lines as security dragged him away. The motive in this incident at Tokyo Disneyland is still unknown.

Sankei News reported the man was turned over to Chiba Prefectural Police and placed under arrest as the investigation into the incident begins. No injuries were reported and there was no weapon on his person.

1 thought on “Guest Jumps Into Parade Route, Gets Tackled, and Forcibly Removed from Park in Uncharacteristic Incident at Tokyo Disneyland”