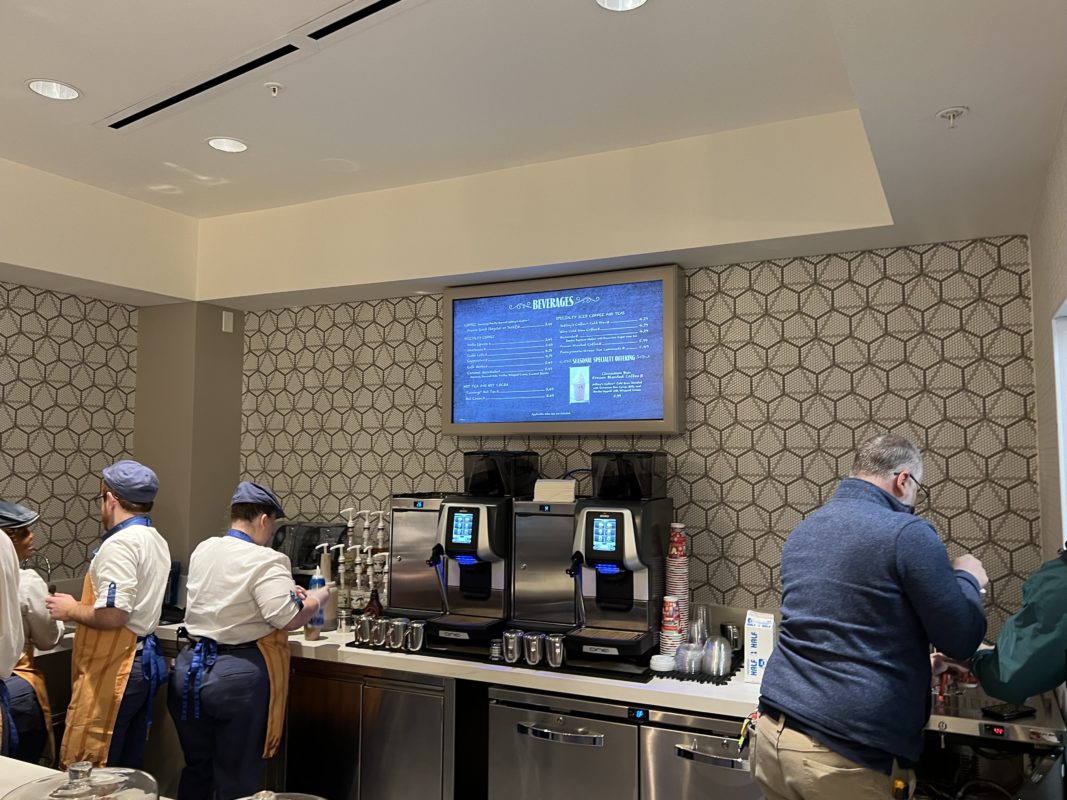 The new Carousel Coffee shop at Disney’s BoardWalk Inn is open, along with the seating area that opened yesterday. It’s located in the lobby, replacing Dundy’s Sundries, which closed permanently in October.

The Cast Members gathered outside Carousel Coffee for an official ribbon cutting before the new quick serve location opened.

These images of the Mad Tea Party teacups resemble works of art that could be found in a New York City gallery.

Carousel Coffee is done in soft grey, cream, tan, blue and gold tones. It has an overall modern resort feel to it, for better or for worse.

On one side is a grab-and-go station with assorted pastries, parfaits, snacks, and assorted beverages.

The pastry case has an assortment of snacks and breakfast items including their signature crunchy raspberry danish, vintage Mickey and Minnie sugar cookies, as well as assorted cereals.

Next to the self-serve cases are two toasters, a plastic utensil dispenser, and straws.

One wall has a vintage photograph of Goofy taking a spin in the Mad Tea Party teacups attraction at the Magic Kingdom. How does this fit in at the BoardWalk? Because it is an amusement park ride? Did someone at the last minute realize there was almost no color inside this interior and decided to throw this in as some attempt at adding charm?

Hanging over a second condiment station is another photograph of a Magic Kingdom attraction. This is of Prince Charming Regal Carrousel.

This is the recently opened seating area where guests can enjoy their treats. If you look at the top upper right side of the photo, you can see the entrance to Carousel Coffee.

The interior is adding fuel to the fire on the current hot-button issue amongst Walt Disney World fans: the removal of theme and story from Walt Disney World Resort Hotels. Of course, it has been discussed for years with the addition of “bland” new resorts such as Riviera and the remodeling of old favorites such as Yacht Club, the Contemporary Resort, and more. Now, with the lobby refurbishments looming at Disney’s Grand Floridian Resort and just outside these walls at the BoardWalk, fans are anxious about the future and if the touches and themes they love so much about these enchanting escapes will be erased in the name of industry-standard hotel design.

If you read WDWNT regularly, I probably don’t need to tell you why this is bad and the antithesis of what the Disney Parks stand for creatively.

Want to check out a full review of the location? Come along and join us as we arrive at the grand opening!

Carousel Coffee at Disney’s BoardWalk is currently scheduled to be open from 7 a.m. until 4 p.m. daily.

The new shop and seating area are part of a larger refurbishment effort at Disney’s BoardWalk. Belle Vue Lounge was also remodeled recently, and the guest rooms are set to be refurbished as well. Outside the Inn, BoardWalk Deli has replaced the old bakery, the ESPN Club is becoming the Cake Bake Shop, and BoardWalk Ice Cream opened in 2021 where Ample Hills Creamery used to be.