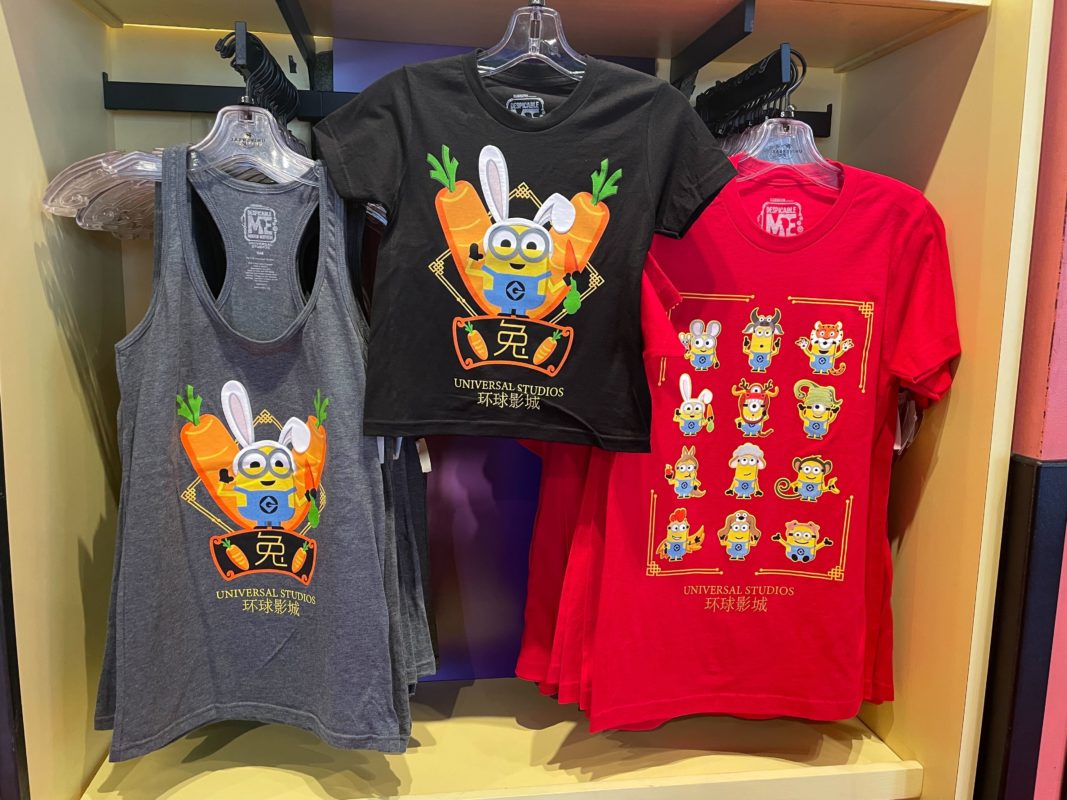 This shirt is vividly red and shows all 12 Chinese zodiac signs, each represented by a different Minion.

Each Minion is dressed up as their corresponding Chinese zodiac sign. The dozen Minions are wrapped in a golden decorative frame on this red Lunar New Year t-shirt.

The year 2023 is the year of the rabbit. If your Chinese horoscope is that of the Rabbit, 2023 might be a lucky year for you. The color red is also a sign of good fortune to come.

The bottom of the shirt says “Universal Studios” in both English and Mandarin.

This tank top is grey with a Minion dressed as a rabbit in the middle. Carrots run abundant on this Lunar New Year Tank Top as another Chinese symbol of good luck in the new year.

The Minion represents the Year of the Rabbit, which is 2023’s Chinese Horoscope. Universal Studios is written in both English and Mandarin at the bottom of this heathered gray tank top, just below a ribbon with the Mandarin symbol for “Rabbit”.

The Year of the Rabbit continues with this black Lunar New Year Minions T-Shirt for kids. Our rabbit-eared minion waves while holding a carrot. Behind the minion, two carrots protrude out from a gold decorative diamond frame.

Gold continues with Universal Studios screen-printed in both English and Mandarin along the bottom of this black youth-sized t-shirt.

There’s no question that this Minion is ready to welcome in 2023 as the “Year of the Rabbit”. An orange ribbon frame at the bottom of the t-shirt features the Mandarin symbol for “Rabbit” flanked by two more orange carrots on either side.

If last year is any indication, we can expect to see a lot of new merchandise coming to Universal Studios as the Chinese Lunar New Year approaches. In addition to Illumination’s Villain-Con Minion Blast, a whole Minion Land is under construction at Universal Studios Florida ensuring any fans that Minion merchandise will continue to be in heavy supply, as well.