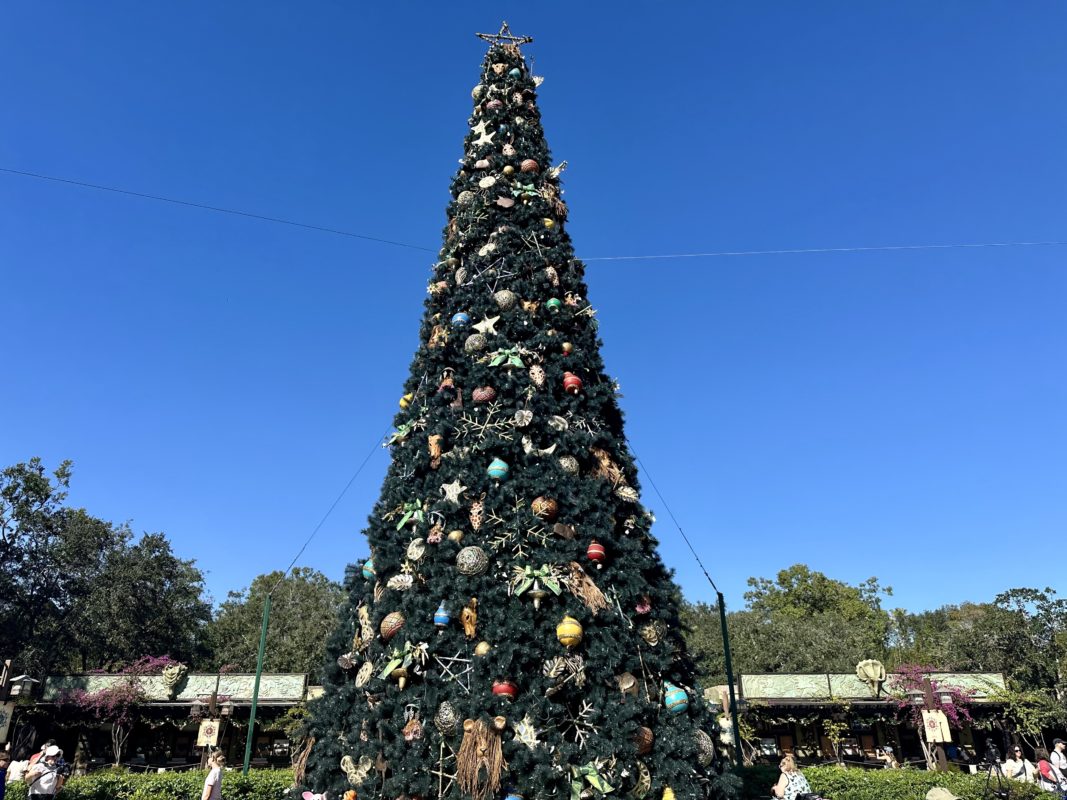 Jambo from Disney’s Animal Kingdom! We’re planning on doing some shopping and we hear the kid’s meals at Restaurantosaurus now include a National Geographic dinosaur book. We will be sure to report on all the new things we find today. Adventure is out there!

The Christmas tree is now up at Disney’s Animal Kingdom. Let’s take a closer look.

Under the tree you can find toys themed to Disney characters. A few of the characters we spotted included, Chip ‘n’ Dale, characters from Winnie the Pooh and Stitch.

The Passholder entrance was open when we arrived at the park. Let’s do some shopping!

Plush puppets of the baby penguin and polar bear from “Merry Menagerie” are available for purchase in Riverside Depot. We’re so happy to see that these plush puppets are back again this year.

A planter featuring Baymax from “Big Hero 6” has arrived in Riverside Depot.

A teapot with lid featuring Marie from “The Aristocats,” is also available in Riverside Depot. This is part of the Disney x Ann Shen collection.

A set of 8 Sketchbook ornaments featuring Snow White, Doc, Happy, Grumpy, Sleepy, Sneezy, Bashful and Dopey from “Snow White and the Seven Dwarfs” is now available. The set is for the 85th anniversary.

It was a beautiful day here in Disney’s Animal Kingdom. We decided to stop by and watch Winged Encounters – The Kingdom Takes Flight.

We saw beautiful Macaws up close and personal.

The “Merry Menagerie” mural is now up across from Tiffins.

Pandora – The World of Avatar is now decorated for the holidays.

A Na’vi inspired nutcracker and regular nutcracker are right by the sign for Pongu Pongu.

New “Avatar” merchandise has arrived in Windtraders just in time for the new movie, “Avatar: The Way of Water,” which arrives in theaters on December 16.

The new merchandise includes a glow in the dark “Avatar” spirit jersey.

We stopped by to watch the Tam Tam Drummers of Harambe.

We even saw some flotillas as we walked around Disney’s Animal Kingdom. We saw Russell and Dug from “Up” on the Adventure flotilla and the Discovery Island Drummers flotilla.

In Chester & Hester’s Dinosaur Treasures, we spotted some new Mickey Mouse merchandise. There was a colorful pair of Mickey Mouse underwear, a black and white Mickey Mouse fluffy jacket and a cropped Minnie Mouse T-shirt.

We stopped by Restaurantosaurus to try a kid’s meal.

On our way out of the park we spotted Santa Claus on his flotilla.