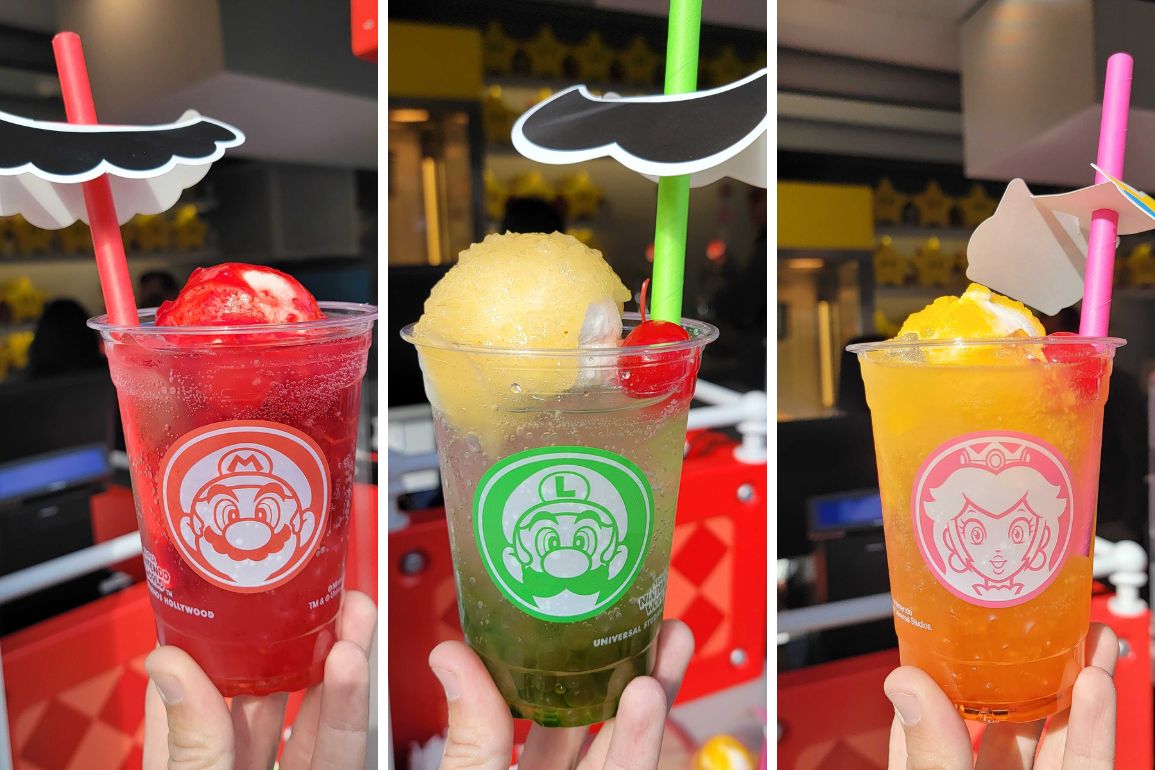 These new drinks are strikingly similar to those offered at the Mario Cafe at Universal Studios Japan before their Super Nintendo World opened. There’s a couple of ingredient differences here in Hollywood, but the concept and general execution is the same.

Each soda is made with the same ingredients, but with different flavor variations. The ingredients include flavored popping boba, flavored syrup, Sprite, fruit sauce, a scoop of vanilla bean ice cream, coconut syrup, and a cherry. The variations come from the flavored boba, syrup, and fruit sauce, which can be strawberry, green apple, or peach.

Each one comes in its own signature plastic cup with a large color straw that coordinates with the drink and a fun accessory – a signature paper mustache for Mario and Luigi and a paper crown for Princess Peach. These are the same as those used in Japan.

The ice cream doesn’t do much for the overall experience. It’s too cold out right now for it to melt and mix in easily. And when it does finally start to break down, the ice cream doesn’t so much mix into the drink as just kind of stays suspended within it. It’s lumpy and chunky throughout the top of the drink, and won’t sink down any further. It’s not wholly unpleasant, it just doesn’t look very good and it doesn’t really bring much to the drink. You’re eating a scoop of ice cream that happened to fall into your strawberry drink, not so much drinking a cream soda.

That being said, the real fruit flavor of the strawberry was pleasant and even though it is a canned strawberry flavor, that is better than the other artificial ones.

Luigi’s Green Apple Soda was the least enjoyable of the three. The applesauce doesn’t mix in very well at all, leaving just a candy green apple flavor which isn’t spectacular. It’s stringent and harsh, very chemical flavor forward. And it doesn’t provide much in the way of Apple flavor at all, so it’s mercifully the most subtle flavor of the three. But for the price, we want more than just a mildly scented glass of Sprite.

This one was okay. It’s not fantastic, but it’s not as bad as the Luigi one. The artificial peach flavor is at least the most enjoyable of the artificial flavors, as it is closer to a real peach flavor than either the Apple or strawberry syrups are. The peach sauce on top is just pureed canned peaches and it doesn’t really mix into the drink very well, but it is a nice topping at least.

And as with all three of these, the ice cream doesn’t mix in, it just gets suspended in the Sprite. If there are multiple people at your party and you want to do flavor variations, this might be an interesting one to sample just to say you did. But it’s not something that is worth finishing.

Are you brave enough to try one of these? If so, let us know what you think of it in the comments!