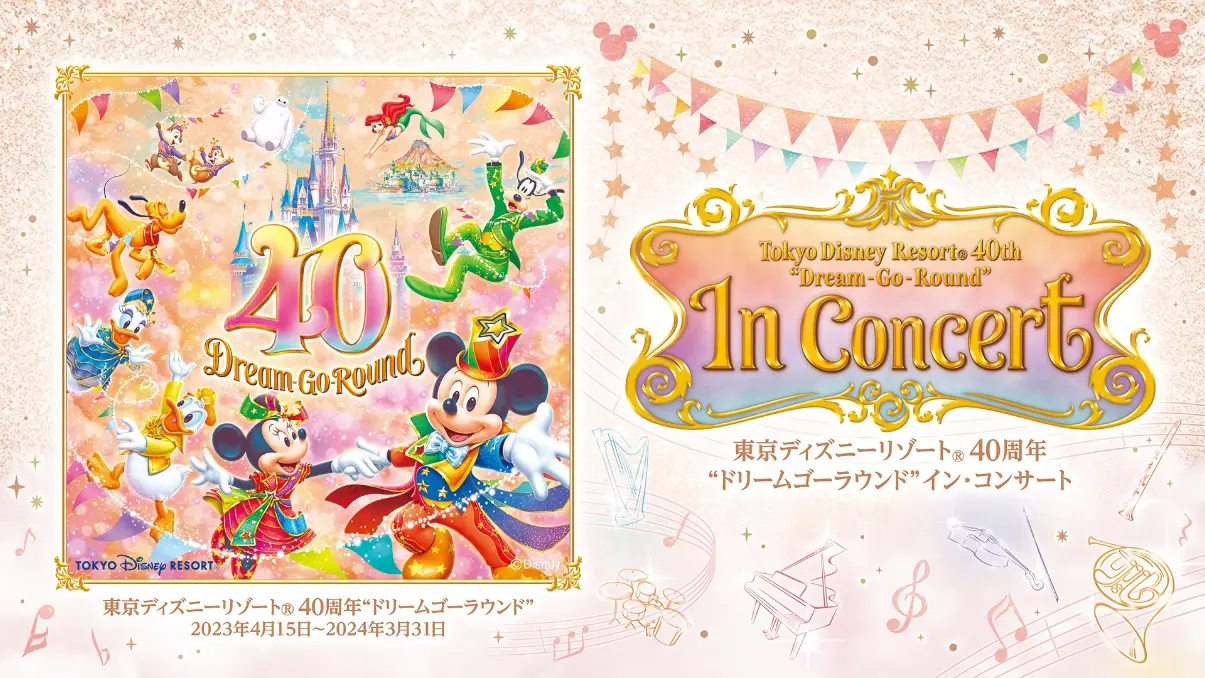 Tokyo Disney Resort 40th Anniversary “Dream-Go-Round” in Concert will kick off in May and tour Japan through the summer featuring a full symphony orchestra and incredibly talented singers. The complete setlist has not been revealed yet, but we do know a few songs will be played. Namely “Tokyo Disneyland is Your Land,” “One Man’s Dream,” the score for Soaring: Fantastic Flight, “It’s Very Minnie!,” “Club Mouse Beat,” and two songs from The Happy Ride with Baymax. Based on our experience at the Tokyo DisneySea 20th Anniversary Concert last year, we also expect to hear plenty of attraction theme songs, other beloved seasonal event themes, and every single anniversary theme song from the park’s illustrious 40 year history.

Performances of the Tokyo Disney Resort 40th Anniversary in Concert are as follows:

There are 24 performances this round, up from 17 during the Tokyo DisneySea 20th Anniversary in Concert series.

Tickets are available for lottery now through Lawson Ticket (in Japanese only) until December 29 at 11:59 p.m. JST. Results of the lottery will be announced on January 11 at 3:00 p.m. JST. Those wishing to attend may apply for up to four tickets per concert. Leftover tickets will be sold at Lawson stores nationwide from two weeks before each performance.

Prices are as follows:

After our wonderful experience at two of the Tokyo DisneySea 20th Anniversary “Time to Shine” in Concert performances last year, we highly recommend trying to attend one of these performances if you find yourself in Japan next summer!

Will you be joining in for the Tokyo Disney Resort 40th Anniversary in Concert series next year? Let us know in the comments below!

REVIEW: New "Merry Unbirthday Cupcake" Is a Perfect Way to Celebrate at Magic KingdomJuly 4, 2022
PHOTOS: Painting Begins on Side of Building for Guardians of the Galaxy: Cosmic Rewind at EPCOTJanuary 12, 2022
NEW Jungle Cruise T-Shirt Sails In To Walt Disney WorldJanuary 6, 2023